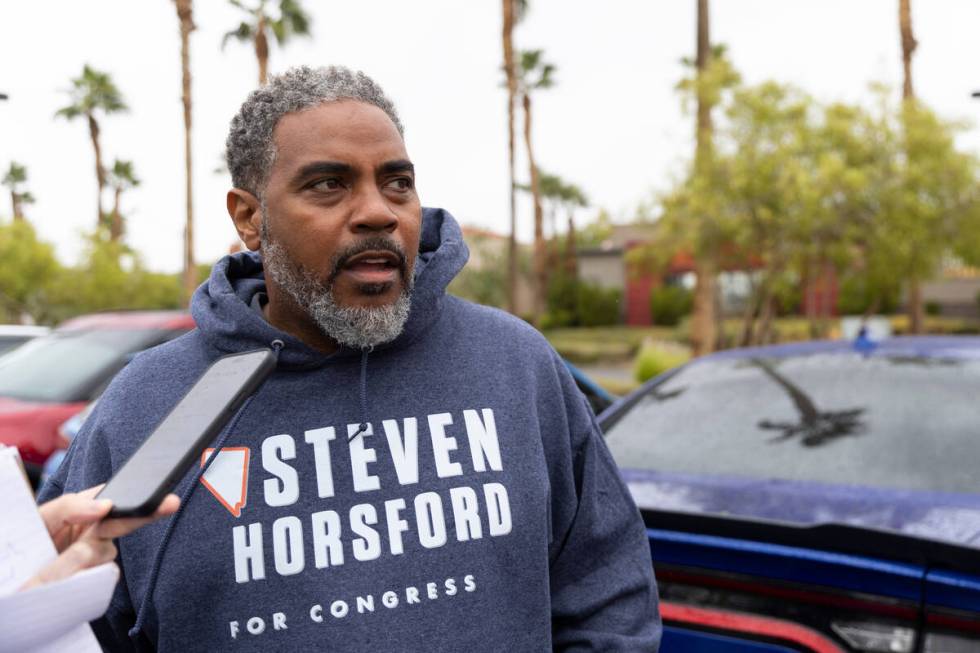 Voting was underway as storm clouds gathered above a cold, wet and windy Las Vegas Valley on Tuesday.

Polling places across Clark County opened at 7 a.m. Tuesday and will remain open until 7 p.m.

Residents can visit any of 125 voting centers, set up in schools, community centers and parking lots across the valley, to vote in person or drop off their mail-in ballot.

In a Home Depot parking lot on West Tropical Parkway in northwest Las Vegas, voters lined up in the driving rain to cast their votes in a white tent adorned with a huge American flag. The wait was about 40 minutes, said Makayla Bowers, 18, who was voting in her first election.

For her parents, who were also voting, it was a special family moment to see their daughter cast her first ballot, said Jeff Bowers, 53.

A few feet away in the parking lot, a Ford F-150 pickup truck belonging to voter Todd Frantzich, 58, was decked out with some pro-Donald Trump, anti-Joe Biden flags.

“That’s their freedom of speech,” Jeff Bowers said. “More power to them.”

For his part, Frantzich said his flag, with his expletive-laden anti-Biden statement, only gets enthusiastic thumbs ups and honks from other drivers. And while some of the Republican-leaning voters found his flags to be funny, other Democratic-leaning voters sighed at the display.

Brittany Johnson, 32, was working at the Tropical Parkway voting tent as an exit poller. By about noon, she said, she had interviewed about 50 people. She had seen more Republican voters than Democrat, but more people seemed to be voting for Sisolak, she said.

‘A lot of people out here’

In the race between Cortez Masto and Laxalt, she said, she gleaned from her polling that more people had been voting for Laxalt. And despite the weather, the large turnout was encouraging to see, Johnson said.

The voters at the northwest Las Vegas vote center, whether Republican or Democrat, all said they had no problems with casting their ballots, and everything seemed to be running smoothly.

Steven Horsford, the Democratic U.S. Congressman for Nevada’s 4th congressional district, stopped by the polling place to see how things were going.

“I’m glad to see so many people turning out,” Horsford said. “Obviously the weather, raining, people standing outdoors — it’s my preference that that not be the case but you know, this is a very important, consequential election and people are doing everything they can to have their voice counted.”

“I’ve seen a few concerning practices that are not normal where people are posted up or parked in areas where they want to create intimidation or just show people their presence,” Horsford said. “I just want people to have a free and fair election, and for no one to feel intimidated.”

Reposting this because I don’t think people are appreciating it enough #MAGothA #ElectionDay2022 pic.twitter.com/P4d2fvcWLC

Coby, who also said his voting experience went off without a hitch, wasn’t voting Republican.

“I voted straight Democratic. I’m voting for every woman who’s a friend of mine right now,” Coby said. “I think it seems like rights are being taken away from women, and I want to support them.”

On the other side of the Las Vegas Valley, outside Henderson’s Fay Galloway Elementary School, a dozen voters stood in line minutes before the polls opened, eager to cast their ballot while the line was short.

“I feel the most change you have in voting is starting where you live,” said Mallory Titterington, 32.

The school, which is located on Skyline Road, held a staff development day Tuesday, opening the student drop-off area for voters to park.

Steve Nieto, 53, chose to vote on Election Day to support his 22-year-old daughter, who also was voting.

“I don’t like the direction we’re going in as a country so it’s important to vote,” Nieto said.

Nieto said he would like to see local politicians combat rising inflation and place more attention on homelessness. Nieto was briefly homeless after serving in the army during both Gulf Wars.

Chuck Childs, 73, said he has not missed an election since he turned 18.

“I would like to see the economy turned around,” the lifelong Henderson resident said Tuesday morning.

Rodney Gardner, 77, and his wife Theresa Gardner, 73, said they considered it their duty to protect the Constitution from politicians they felt may try to change it.

“The Constitution says the people have the power over the government and the government lies with the people,” Rodney Gardner said. “The state gives power to the federal government, and I believe our current administration has that upside down.”

Rodney Gardner served in the Navy, fighting in Vietnam from 1967 to 1970, before working in Utah and Wisconsin schools. His wife, Theresa Gardner, spent 20 years working in city, state and county government, most recently as a deputy treasurer in Tooele County, Utah before retiring.

“We’re patriots,” Theresa Gardner said. “My ancestors served under Washington, and I’m here to save the Constitution. Everyone has a vote and they should use it.”

By 9 a.m., less than 20 people had voted at Doolittle Community Center on the Historic Westside.

“There should have been a line,” said Ethelvert Spates, 71, emphasizing the need for people to vote.

Spates said he wanted to see elected officials combat rising rent costs and homelessness in the Historic Westside, where he lives.

“The homeless problem has never been this bad,” he said.

Luis Planas, 78, dropped off his mail-in ballot and was back in his car within two minutes of arriving at the community center.

“I voted Democrat all the way down the ballot,” he said proudly. “ I think the country needs my support, my vote.”

Raynell Childs said her mother, who died last year, emphasized to her the importance of educated voting.

“Overall, it’s important that our voice is heard,” the 36-year-old Childs said. “There’s so much going on and they’re trying to take away our rights.”

Childs said she worried about women’s rights, including abortion protections, being taken away.

“I brought my kids with me,” she said, gesturing to her car. “I wanted to make sure that they understand how important voting is.”

Even if this happens, you need to vote | CARTOONS