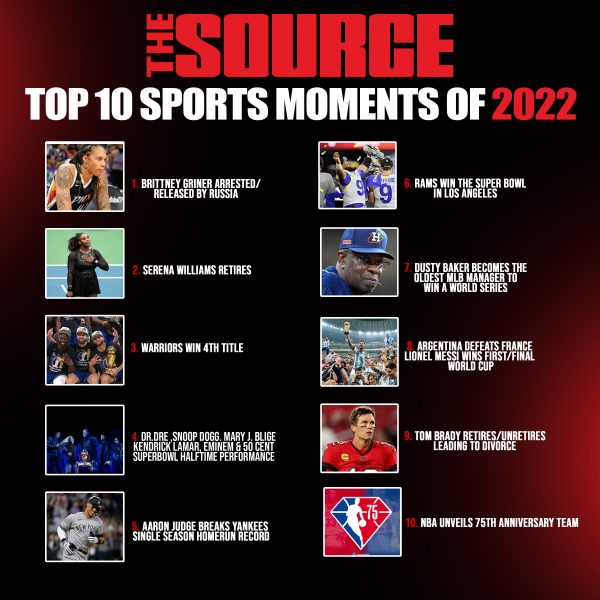 The SOURCE’s Top Sports Moments Of 2022

2022 was a polarizing year for sports, both on and off the court and field. Here are The Source’s Top Sports Moments of 2022.

Brittney Griner’s arrest in Russia was probably the biggest sports story of this year. Griner had been playing basketball for the Russian Premier League during the WNBA offseason and was arrested at an airport after authorities found a cartridge with less than a gram of hash oil. She was subsequently detained and sentenced to nine years in a Russian prison. While this might seem like a minor infraction, the War in Ukraine had just begun before she was arrested, and many were led to believe that Russia was making an example of her. In December, ten months after her arrest and after spending four months in prison, Griner was released in a prisoner exchange with the United States for Russian international arms dealer Viktor Bout, also known as “The Merchant Of Death.”

It’s always a bittersweet moment when one of the GOATs retires. Serena Williams announced she would be “evolving away” from tennis in an August issue of Vogue Magazine. She cited her growing family and wanted to focus on other things that were important to her as the reasons for her decision. The 2022 US Open marked the last time we would see Williams on the court, where she lost in the third round to Ajla Tomljanović. After her loss, Williams was universally celebrated for her 20+ year career, cementing her place as one of the greatest tennis players of all time and one of the greatest athletes of all time.

Coming off of a 2-year slump plagued with injuries and trades after losing to the Kawhi Leonard-led Toronto Raptors, the Golden State Warriors had something to prove going into the 2021-2022 NBA season. They finished the season with a 53-29 record (3rd in the conference) and beat the Grizzlies and Mavericks in the semi-finals and finals. Going up against a young Celtics team, the more veteran Warriors beat Boston 4-2 to win their 4th championship in 7 years and the 7th in franchise history. This also marked the first time Steph Curry was named Finals MVP.

Before 2022, the last time the City of Los Angeles hosted a Superbowl was in 1993. However, the newly constructed SoFi Stadium in Inglewood, CA, made LA (or Inglewood) the perfect place to host SBLVI, not to mention the beaches and near-perfect weather. That said, it was only suitable to have west coast rap legend Dr. Dre host the Superbowl Halftime Show. Dre went on to bring out his friends and collaborators, Snoop Dogg, Mary J. Blige, Kendrick Lamar, Eminem, and 50 Cent, to give one of the greatest halftime performances of all time. People still wonder how Snoop got away with wearing a blue sweatsuit, Crip walking, and throwing up gang signs on stage.

On October 4, Yankees outfielder Aaron Judge would hit his 62nd home run of the season, breaking the previous Yankees and American league single-season home run record. The final form of 61 was set by Roger Maris 61 years ago. Judge’s homerun came in the first inning after the Yankees had a 1-0 lead over the Texas Rangers. After the home run, the Yankees dugout emptied, where they celebrated Judge breaking the longstanding record. However, Judge struck out at his second at-bat at the bottom of the 2nd inning, leading Yankees manager Aaron Boone to remove him from the game.

It was only fitting that an LA team would play the first Superbowl in Los Angeles in nearly three decades. On February 13, the LA Rams played the Cincinnati Bengals in what would be the second most-watched Superbowl in NFL history. The game was relatively close throughout, with a 10-13 Rams lead by the end of the second quarter. However, to close it out, Rams WR Cooper Kupp would catch a game-winning pass in the fourth quarter to win the game for the Rams. The Rams marked the 3rd professional sports trophy brought to LA in the last 15 months prior, with the Lakers and Dodgers winning championships in 2020. This was a well-deserved championship for a city that lost icons Nipsey Hussle and Kobe Bryant in the years preceding.

Dusty Baker is living proof to never give up on your dreams, regardless of how old you are. Baker was signed by the Houston Astros in 2020 at 70 after having not managed a team in 3 years. After failing to make it to the World Series in his first year of working with the Astros in 2020 and losing to the Atlanta Braves in the world series the next year, Baker was able to lead his team to a World Series victory this year against the Philadelphia Phillies, making him the oldest manager in baseball history to do such. Not only was he the oldest manager to win a World Series, but he was also the third Black manager to do so.

The world cup was the biggest and most talked about sports event this year. The World Cup hosted 32 teams and over 3.4 million people in attendance. The final match was played on December 18 between Argentina and France. Argentina took the lead early with goals from Lionel Messi and Ángel Di María. Ultimately, Argentina bested France 4-2, earning soccer legend Lionel Messi his first World Cup championship.

Tom Brady has proven to be one of the greatest, if not the greatest, football players and athletes. At 45 years old, he’s still putting up numbers against players born when he was just starting in the league. When Brady announced that he was retiring, the football world celebrated his career and legacy; however, many were skeptical of whether he was retiring. However, only 40 days after announcing his retirement, Brady announced that he was unretiring and playing the 2022-2023 season with the Buccaneers. After Brady’s announcement, his wife, Gisele Bündchen, publicly talked about their relationship and the impact football has had on their marriage and family life. In October, the couple announced they would divorce after 13 years of marriage.

During the 2022 All-Star Weekend, the NBA announced their 75th Anniversary team, comprising the 75 greatest basketball players of all time. While critics expected some big names to be included in the list, such as Michael Jordan, LeBron James, Kareem Abdul-Jabar, Kobe Bryant, Shaquille O’Neal, and Magic Johnson, there was a lot of talk about the snubs and inclusion of more current players such as the inclusion of Damian Lillard, but the exclusion of Dwight Howard, Vince Carter, and Pau Gasol.