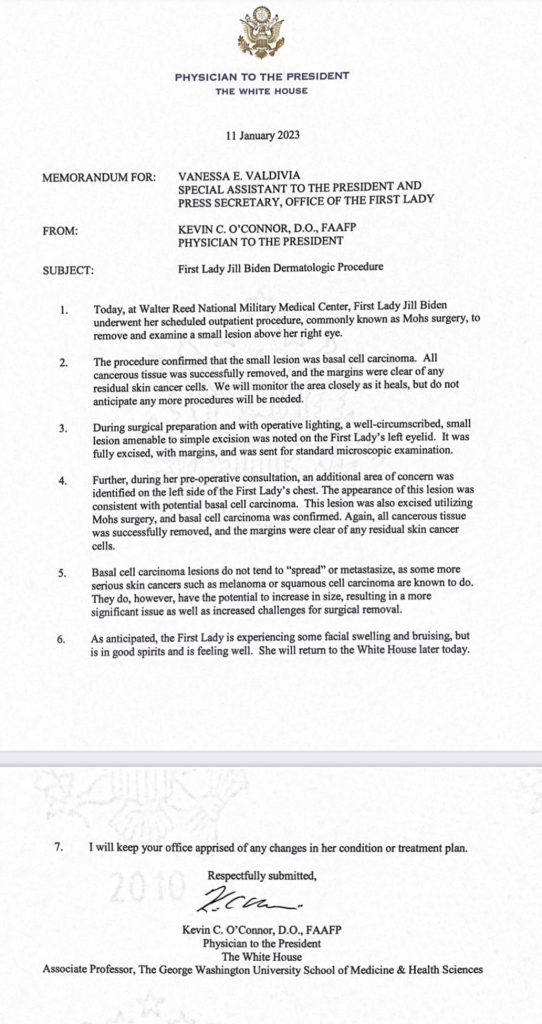 First lady Jill Biden had three skin lesions removed on Wednesday, two of which were detected cancerous. The cancerous tissue was removed and she was expected to return to the White House later in the day as advised by her doctor.

President Biden accompanied his wife to Walter Reed National Military Medical Center in Bethesda, just outside of Washington where he stayed with his wife for nearly eight hours, leaving only after O’Connor’s report was released. The president returned to the White House in the late afternoon with hopeful news.

Dr. Kevin O’Connor, physician to the president, said, “The first lady is experiencing some facial swelling and bruising, but is in good spirits and is feeling well.”

A week ago, the White House announced that the first lady would be having Mohs surgery to remove a small lesion above her right eye that had been found during a routine skin cancer examination.

Basal cell carcinoma was confirmed by Dr. O’Connor, as he stated, “All cancerous tissue was successfully removed, and the margins were clear of any residual skin cancer cells.” Doctors found two more lesions while the first lady was at the hospital as they prepared the first lady for surgery. O’Connor reported the removal of a second lesion on Jill Biden’s left eyelid that has been sent for microscopic examination.

Doctors further identified “an additional area of concern” on the left side of her chest, and removed a lesion using Mohs surgery. Basal cell carcinoma was also confirmed in that lesion, O’Conner said, mentioning all cancerous tissue had been removed. Basal cell carcinoma is not a notoriously aggressive form of cancer and does not spread as fast as other serious skin cancers do. However, they can increase in size, leading to a more difficult removal.

First lady Jill Biden has been a continuing advocate for cancer research– traveling to cancer research and treatment centers. Her passion is inspired by the breast cancer diagnosis of four of her friends in 1993, reported The White House. In 2015, her son Beau Biden died from brain cancer. President Joe Biden started the “Cancer Moonshot,” an initiative to drastically reduce the number of deaths caused by cancer,during his first year as vice president. Cancer Moonshot was relaunched in 2022.

The Skin Cancer Foundation reports that the Mohs procedure was developed in the late 1930s by surgeon Frederic Mohs and is used to remove basal and squamous cell carcinomas. Basal cell carcinomas are the most common type of skin cancer and are typically mild due to slow growth. Treatability has high success when detected early.

The surgery begins with locating and marking the spot. The area is then anesthetized to numb it, but patients remain awake. The doctor then removes a visible layer of skin tissue from the area and takes it to the lab to be analyzed. In the lab, they cut the tissue into sections, dye it and map out the area it was taken from. A technician freezes the tissue, further slices it thinly into horizontal sections and places it under a microscope for examination. If cancer cells are present, another layer is removed from the surgical site and the process repeats until the cancer cells are gone.