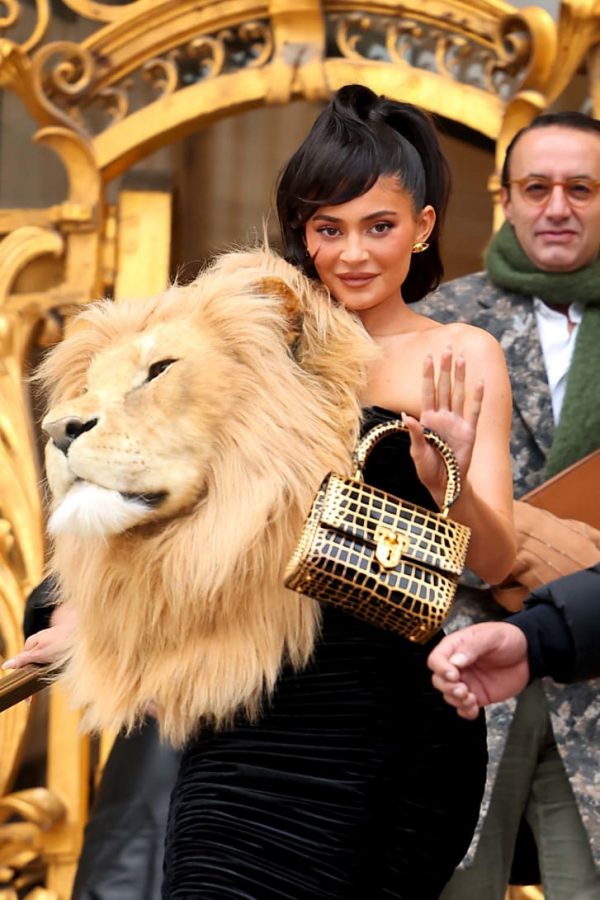 On Monday, Kylie Jenner attended the Schiaparelli’s couture runway in Paris. She arrived in a black velvet strapless gown decorated with the life-size head of a lion — a pre-release from the label’s Spring-Summer 2023 couture collection that debuted moments later.

The faux lion head featuring a manicured mane, brings hyper-realism to the next level. The design covered Jenner’s entire torso and was completed with a pair of black Schiaparelli sling-backs with golden embossed toes.

Jenner’s outfit was spotted on the runway as she cozied up in her seat rocking the outfit. The collection featured more hyper-realistic animal ensembles. Show notes report, the collection was inspired by Dante’s “Inferno” and the nine circles of hell. This is a metaphor for the uncertainty and creative torment all artists experience, wrote creative director Daniel Roseberry.

Roseberry reimagined the leopard, the lion and the she-wolf in the collection by drawing literally from the three beasts that appear in the 14th century poem– representing lust, pride and avarice respectively.

Naomi Campbell carried a boxy, black faux fur coat with a wolf’s head on the left shoulder down the runway, while Canadian model Shalom Harlow wore a strapless snow leopard tube dress with a feline head emerging through the bust.

The animal pieces were constructed entirely by hand from resin and man-made materials. Although Schiaparelli specified the pieces are “faux-taxidermy,” the close proximity to trophy hunting turned certain social media users off.

Roseberry believes in the power of art and the conversations it sparks. He said, if the clothes are instilling fear then they’re doing their job. “Inferno, Purgatorio, Paradiso: One cannot exist without the other,” he concluded in the show notes. “It is a reminder there is no such thing as heaven without hell; there is no joy without sorrow; there is no ecstasy of creation without the torture of doubt.”

Roseberry further stated, “It’s not costume. It’s not wearable art, even. This is not like a couturier dressing women up like dolls. It’s more speaking about that feminine energy.” Still, despite the outstanding execution of design heightened by a deeply intentional exposition, the show is arguably being overshadowed by critics.

The Source |King Von Posthumous Album In The Works