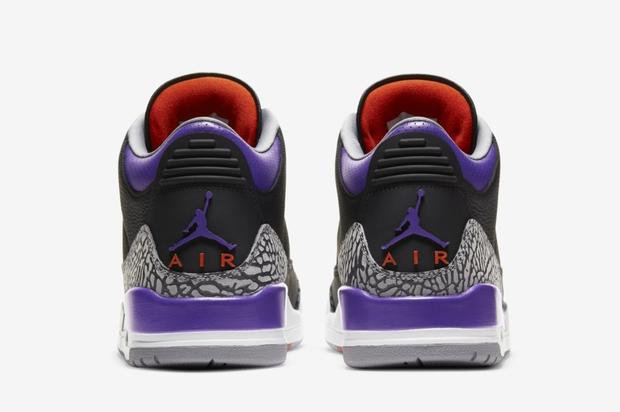 A slick new Air Jordan 3 is dropping in the not so distant future.

When sneakerheads look back at some of the best Air Jordan models, the one silhouette that always seems to be brought up in the top 3 is, funny enough, the Air Jordan 3. For those who don’t know, this shoe was designed by Tinker Hatfield who is responsible for some of the greatest Nike shoes of all-time. The Jordan 3 was created at a critical time for Nike as it was the shoe that helped keep Michael Jordan with the brand, at a time where it seemed all but confirmed he would be leaving.

Over the years, the Jordan 3 has gotten some incredible colorways, and the brand hasn’t stopped in 2020. For the last few months, fans have been anticipating a “Court Purple” colorway, and now, it seems as though it is finally here. Thanks to @j23app on Twitter, we now have an official look at the shoe, below. As you can see, the shoe has a mostly black leather upper, while purple highlights are placed on the midsole and tongue. From there, the Jordan 3s signature elephant print is placed on the toe box and back heel.

Based on information coming from the @j23app, it would appear as though this sneaker will not be releasing in North America, which is definitely disappointing news. As for the actual release date, you can expect these to release on November 21st for $190 USD.