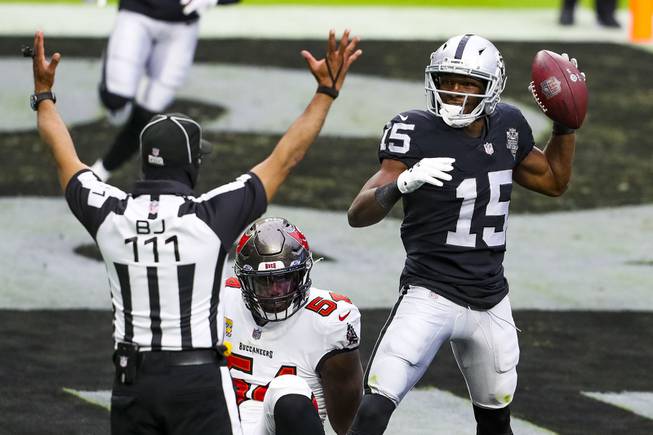 Las Vegas Raiders wide receiver Nelson Agholor (15) smiles as a back judge Terrence Miles (111) confirms his touchdown during a game against the Tampa Bay Buccaneers at Allegiant Stadium, Sunday, Oct. 25, 2020.

The Raiders started fast but were ultimately overwhelmed by Tampa Bay on Sunday, falling at home, 45-20.

Las Vegas is now 3-3 on the season and still firmly in the playoff hunt, but the Raiders missed a chance to make a statement with a win over red-hot Tom Brady and the Buccaneers. And it was a winnable game.

A quick analysis of what went wrong for Vegas:

The last time we saw the Raiders, their defense was pressuring Patrick Mahomes on nearly every dropback in Las Vegas 40-32 win over the defending champs in Week 5. The defensive front looked quick, forceful and downright disruptive in that contest.

Whatever magic they captured that day had dissipated by the time Las Vegas kicked off against Tampa Bay. Facing a much more stationary quarterback in 43-year-old Tom Brady, the Raiders went to a coverage-heavy game plan, choosing not to blitz Brady with extra rushers. Unfortunately for the silver and black, the defensive line generated no pressure on the QB, allowing Brady to scan the field and pick apart the secondary to the tune of 369 yards and four touchdowns (on 73.3 percent passing).

Brady dropped back 45 times on the day and was not sacked. The Raiders only knocked him down once. It was a comfortable day at the office for Brady.

That inconsistency on defense is perhaps the biggest issue facing Las Vegas as they gear up for the second half of the schedule. One week, Clelin Ferrell appears to be in the midst of a breakout campaign, and the following week he gets stonewalled for 60 minutes. It’s emblematic of what’s happening across the defensive line, and it’s hard to win that way, especially against a savvy quarterback like Brady.

Do the Raiders have a Josh Jacobs problem?

The second-year running back seemed primed for a monster season coming into 2020, but as Las Vegas approaches the midway point he has struggled to match his rookie output. Against Tampa Bay’s strong front seven Jacobs was nonexistent, finishing with a career-low 17 yards on 10 carries.

Through seven games, Jacobs has now run for 394 yards on 116 attempts, a rate of just 3.4 yards per carry. That lags far, far behind his 4.8 yards per carry last year.

The first instinct would be to blame it on his blocking, but the Raiders’ offensive line is largely the same as it was last year (save for Trent Brown and Richie Incognito missing some games due to injury). And backup running back Devontae Booker has had no problem producing behind that group of linemen (6.3 yards per carry in a backup role), so this is now looking more and more like a Jacobs thing.

On Sunday the Raiders fell behind by three scores and went to a pass-every-down approach, so perhaps there just wasn’t enough of an effort made to get Jacobs into a groove. But the passing game is holding up its end of the bargain, and then some — now the onus is on Jacobs and the running game to provide some balance.

The final score may not indicate it, but the Raiders were very much in this game in the fourth quarter. With 13 minutes remaining, they trailed, 24-17, and faced a 4th-and-1 at the Tampa Bay 17. A conversion there, followed by a game-tying touchdown would have obviously changed the complexion of the game.

Jon Gruden chose to kick on fourth down, however, to pull Las Vegas within 24-20.

After the field goal, Brady did what he does: He drove Tampa Bay the length of the field and hit Chris Godwin with a 4-yard touchdown pass to make it 31-20 with 7:29 remaining. That was pretty much the game.

Four minutes later it was 45-20 and Gruden had to be standing on the sideline, stewing over his decision not to go for it.

Gruden has made progress this season when it comes to going for it on fourth down, especially when analytics overwhelmingly say it’s the right decision, but his play-it-safe streak showed on Sunday, and it was the turning point in a winnable game. Let’s see if he has learned his lesson for good.