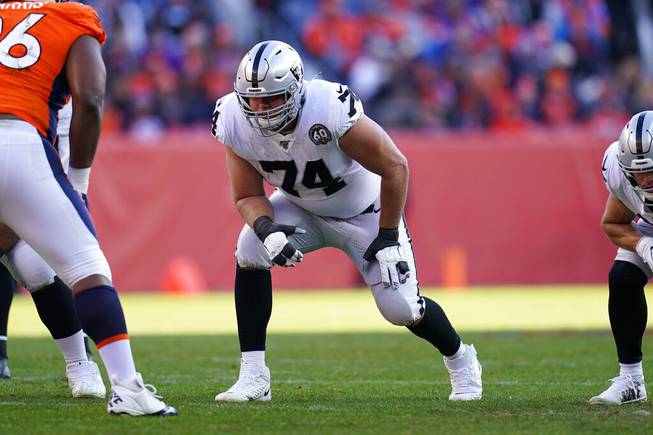 Raiders offensive tackle Kolton Miller during the first half of a game against the Denver Broncos, Sunday, Dec. 29, 2019, in Denver.

Myles Garrett is a one-man wrecking crew, and that term applies to the Cleveland defensive end very literally: If the Raiders aren’t careful, that one man will wreck their offense on Sunday.

Through seven weeks, Garrett has emerged as a candidate — perhaps the favorite — for the NFL’s Defensive Player of the Year award. He has racked up a league-best 9.0 sacks (for comparison’s sake, Las Vegas has recorded 7.0 sacks, total, as a team), including at least one sack in six straight games. He is rated as the third-best edge rusher by Pro Football Focus, and on Wednesday he was named the AFC Defensive Player of the Month.

In Cleveland’s 37-34 win over Cincinnati in Week 7, Garrett added two more sacks to his total, including a strip-sack that he recovered himself.

Because of his incredible production, Garrett certainly has the attention of the Las Vegas coaching staff. Slowing him down in the passing game will be the biggest factor in whether the Raiders are able to sustain their offense on Sunday.

In his Wednesday press conference, Raiders coach Jon Gruden was asked how Garrett, the No. 1 overall pick in the 2018 draft, stacks up against past greats.

“I don’t really compare Myles to anybody because he’s unique,” Gruden said. “He can play right end, left end. He can go inside. He’s a complete, every-down difference maker.”

That certainly counts as an endorsement from Gruden. So, how will the Raiders block Garrett on Sunday?

The Las Vegas offensive line has done a good job of pass blocking this season — good, not great — as the team currently ranks 13th in the league in sacks allowed with a 5.0% sack rate. Derek Carr has been pressured on 18.6% of pass plays, but that’s a pretty good number for a line that has shuffled players in and out of the starting lineup this season due to injuries and COVID-19 circumstances.

The Raiders have only faced one “elite” edge rusher so far this season, and it came last week when they faced off against Tampa Bay and outside linebacker Shaquil Barrett. Barrett led the league with 19.5 sacks last year and came into last week’s game with 3.0 sacks and 19 pressures, so that served as a pretty decent warm-up for Garrett.

There was some good and some bad when it came to getting Barrett blocked, and it mostly depended on where he lined up. When he rushed against right tackle Sam Young (who was playing in place of starter Trent Brown), Barrett won his matchup and came within a whisker of making a couple game-changing plays. When he rushed against left tackle Kolton Miller, however, the Raiders got him blocked pretty reliably.

On this play in the first quarter, Barrett beat Young to the outside with a speed rush. Young reached back and probably got away with a slight tug as Barrett turned the corner, which saved Derek Carr’s skin:

That was too close for comfort.

Later, Barrett tried to speed rush around the right tackle again. While Young was able to push him past the pocket, Barrett still got close enough to spook Carr, forcing the QB to pull the ball down and scramble up the middle for no gain:

Barrett’s most impactful play of the game came on another play in which Young was left to block him 1-on-1.

Barrett was able to get Young off balance and drive him straight back, collapsing the pocket. Barrett then reached out and hit Carr’s arm in the process of throwing:

The play was ruled a fumble on the field, but fortunately for the Raiders it was overturned on replay. Frankly, the Raiders were lucky Barrett didn’t do more damage against Young.

Barrett only rushed against Miller three times on Sunday, and he had less success in those situations.

On this play, Barrett lined up against Miller in space and attempted to bend past him with an outside rush. Miller moved his feet quickly enough to stifle the rush:

Miller won his 1-on-1 battle against Barrett pretty easily on this play, aided by a quick-hitting pass that Carr delivers on-time to Hunter Renfrow:

This play was longer in developing, and though it didn’t end well for the Raiders, Miller did his job. Miller contained Barrett’s first effort, then adjusted and stonewalled his second effort as well. That gave Carr a clean pocket and plenty of time to throw; unfortunately, Carr tripped over his center’s feet:

How will that translate to blocking Garrett? It’s not an exact comparison, as Garrett is quicker and more explosive than Barrett, and that will create problems if the Browns line him up on the defense’s left side. If Garrett gets multiple opportunities to rush against Young, he won’t just come close to making plays, as Barrett did — he’ll cash in.

The Raiders are hoping that Brown will be healthy enough to play on Sunday, and he’ll put up a better fight at right tackle than Young would. But neither is a favorable matchup against Garrett.

Miller might be able to hold his own a little more capably, considering how he fared against Barrett. As Gruden noted, however, Cleveland is willing to move Garrett around, so they will likely seek out the most favorable matchups and adjust as the game goes on.

Carr might be his own best protector on Sunday. A quick release is the best counter to a strong pass rush, so the veteran QB will have to be decisive in his pre-snap reads and not hold the ball too long, because there’s no guarantee the line will be able to hold up against a talent like Garrett.