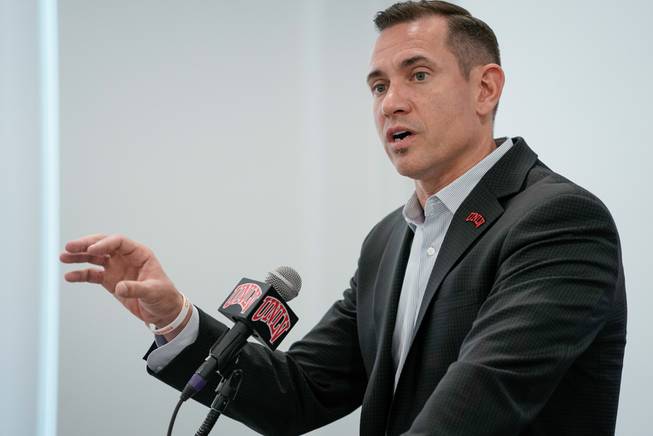 UNLV football is under new management, evident in the way the program has handled preparations for its Week 2 rivalry game against UNR.

Circumstances have converged to make this year’s Fremont Cannon game one of the most historic in the rivalry’s 40-year history: It will be UNLV’s first game at the $2 billion Allegiant Stadium, on Nevada Day.

Previous coach Tony Sanchez would surely have been radiating intensity and playing up the moment. For him, the UNR game was always the most important date on the schedule. If an oblivious staffer or media member happened to wear clothing in any shade of blue during Cannon week, Sanchez didn’t let it pass without comment.

Current coach Marcus Arroyo is dialing that attitude back. To the former Oregon offensive coordinator, it’s simply one of eight games of equal importance in the wacky 2020 season.

Granted, placement has a lot to do with that. During Sanchez’s tenure, the game typically arrived as the season finale, which made it easier to take an all-in approach. Playing it at the start of a coronavirus-shortened season leaves Arroyo little choice but to emphasize that the season will continue on for another month and a half no matter what happens Saturday.

“It’s an important game because it’s our next game,” Arroyo said. “It’s an important game because it is a rivalry game, and yes, there is some pride to be taken within the state, and that’s good. That’s fun. That’s what makes college football college football. But you’ve got to make sure … you don’t make it all or nothing. You can’t do that in any game.”

UNLV’s opening-game performance might have cut into fan enthusiasm: The Rebels looked noncompetitive in falling 34-6 at San Diego State. UNR, meanwhile, upset Wyoming 37-34 in overtime. The dichotomy of those results left UNLV as a 14-point underdog going into the UNR game.

The pandemic has also obviously contributed to the muted feel of this year’s game. When UNLV defeated UNR 33-30 on the road last year, the crowd became so frenzied that players and fans clashed following the Rebels’ walk-off touchdown.

It was ugly, but it was evidence of the rivalry’s heat. The atmosphere inside Allegiant Stadium will be unable to match that Saturday, as only 2,000 fans will be allowed inside—almost exclusively players’ families, students and boosters—to witness the game, in keeping with state-mandated social distancing protocols.

Arroyo is trying to walk a line between being respectful of the rivalry while keeping his players focused on what comes next.

“It’s a really important game [for] the community and city and program,” Arroyo said. “There’s a lot of pride in that game. But there’s an inherent danger in hanging everything on it. That’s what I think you’ve got to be really careful of.”

UNLV won the Cannon three times in five years under Sanchez, including last season’s explosive overtime victory in his swan song. Though he ultimately posted a 20-40 record at UNLV, Sanchez cultivated a loyal band of supporters simply based on his winning record against UNR.

Arroyo is still trying to get into the swing of the Silver State rivalry. While there’s no explicit ban on the color blue, he did let it be known that he won’t be calling UNR by name this week. “I’ll be in red, and I’m calling it Reno,” Arroyo said. “That’s where I’m at with it.”