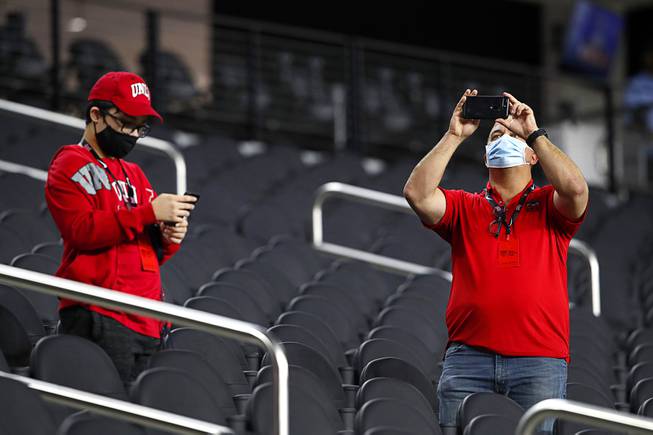 UNLV fans get their first look at Allegiant Stadium before during UNLV’s home opener against UNR Saturday, Oct. 31, 2020.

The UNLV defense needed one stop to get off the field early in the second quarter Saturday against UNR in the Fremont Cannon rivalry game.

Hype man Chet Buchanan, like he’s done many times over the years, got on the microphone and pleaded with those in attendance, “Rebel fans we need you, it’s third down.”

There was one problem: The crowd at Allegiant Stadium was limited to 2,000 attendees because of COVID-19 restrictions.

No matter how loud they cheered for the scarlet and gray, or how loud the music blasted in between plays, there was no disguising the emptiness at UNLV’s new 65,00-seat home. Most plays were contested in complete silence.

There was another problem: Loud crowd noise would have had little impact on the UNR offense, which was unstoppable for most of the night in erupting for 497 yards in a 37-19 victory. UNLV surrendered nine yards per play, leading to UNR scoring on all but one of its possessions.

This is not the way the opening night at Allegiant should have felt.

After all, whenever the Fremont Cannon its escorted out of the stadium by the team in the blue, it’s a bad night — regardless of the venue. If it weren’t for the pandemic, there likely would have been a historic crowd, if anything to see the new $2 billion stadium.

But let’s not be short-sided in how we view things.

First and most important, the Rebels played a football game, which is something they weren’t originally supposed to do until next spring because of the coronavirus. Some fans got to attend, likely the first in-person sporting event they were part of in nearly 10 months since the outset of the pandemic in mid-March.

Most of those fans surely drove home disappointment in the outcome. They were talking about the brutally bad defense and wondering what changes first-year coach Marcus Arroyo has in store for the program.

But at least they weren’t talking about COVID-19, or worrying about the outcome of next week’s election. Sports, like it always should, was a welcome distraction from everything else in our lives.

Remember, this game wasn’t about the opponent or outcome — can’t believe I wrote that considering the opponent. Rather, it was about the venue, Allegiant Stadium.

After years of plotting the move from outdated Sam Boyd Stadium, the program is finally in its new home.

Looking out at the vacant seats you could easily imagine how a game day will look and feel. You can picture the cheerleaders on the field during timeouts, and not socially-distanced apart from each other in the stands. You could picture food vendors walking up and down the aisles, students with homemade signs, and supporters storming the field to celebrate a big win.

Only time will tell if those big wins come. But after years of talking about the program being stuck in neutral because of its home stadium, there are finally no excuses in building a winner. The expectations are unlike any other time in program history.

But, as we saw on Saturday, UNLV does not have the best defense in the Mountain West. And, unfortunately, it no longer has the Fremont Cannon.