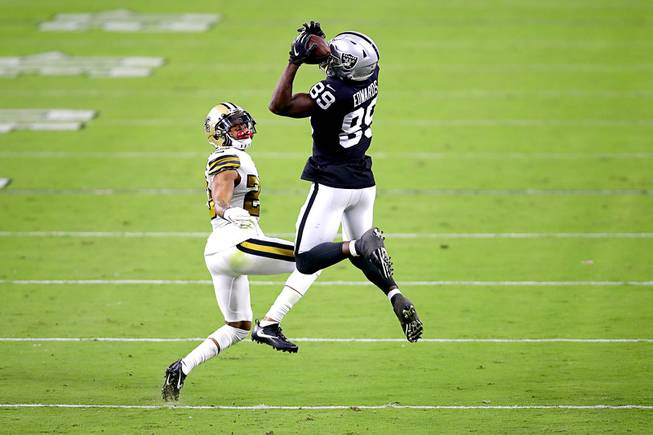 Despite having suffered a pair of serious injuries in the year prior, Raiders rookie receiver Bryan Edwards didn’t worry much when he rolled his ankle in a Week 3 game against the Patriots.

He even briefly returned to the game after going to the locker room to get it examined. He quickly realized playing on it wasn’t a good idea, but still figured it would heal quickly to allow him to reclaim his spot in the starting lineup.

“I didn’t think it was going to affect me this much,” Edwards said. “It was extremely difficult coming back from.”

Edwards is expected to return in Sunday’s game at the Los Angeles Chargers after a six-week absence, much longer than he and the Raiders anticipated. That’s been a frustrating theme of Las Vegas’ season through the first eight weeks.

Not only Edwards’ ankle, but from right tackle Trent Brown’s calf to cornerback Damon Arnette’s thumb and several other examples in between, injuries having lingered longer than expected to disrupt the Raiders’ plans. Earlier in the week, it appeared that Sunday’s game might be when the injury list finally cleared up and saw the team healthier than they’ve been all season.

Then coach Jon Gruden announced Arnette was still a week away from returning, Brown was added back to the COVID-19 list and left tackle Kolton Miller missed the whole week of practice on a bad ankle to become a game time decision.

“We’ve got a lot of issues on our team health-wise,” Gruden said.

Elsewhere, defensive backs Trayvon Mullen and Jeff Heath have both been limited in practice all week and are listed as questionable against the Chargers. Same with running back Josh Jacobs and safety Johnathan Abram, whom both battled illness the last few days but are expected to play.

Injuries derail every team in the NFL in some fashion, of course, and the Raiders haven’t been among the worst affected in a few regards this season. They haven’t experienced any season-ending injuries, for one, since losing receiver Tyrell Williams to a torn labrum in the preseason.

But the pop-up setbacks and nagging ailments can be just as bothersome considering they’re harder to prepare for. Just last week in Cleveland, tackle Brandon Parker was eating breakfast Sunday morning expecting to be inactive when an IV mishap with Brown made him need to suit up and then an early injury to Sam Young thrust him into action.

And that wasn’t the first time this season a freak occurrence forced Parker into a key role as the Raiders also lost a pair of tackles in the first half of a Week 1 win over the Panthers.

“It’s really been that ‘Next Man Up’ mentality here,” offensive coordinator Greg Olson said. “(Offensive line coach Tom) Cable does a great job of teaching those guys to play different positions and Brandon has been a guy that’s been a swing tackle for us. He’s played left, he’s played right and as you mentioned, he got up that morning thinking he wasn’t even going to be on the gameday roster. So, like we said, the depth of our side of the ball at almost every position, we would expect that from the backups at almost every position.”

The Raiders have needed that depth at almost every position, and it hasn’t always worked out as well as it did in a win last week. They were notably shorthanded at certain positions in each of their three losses.