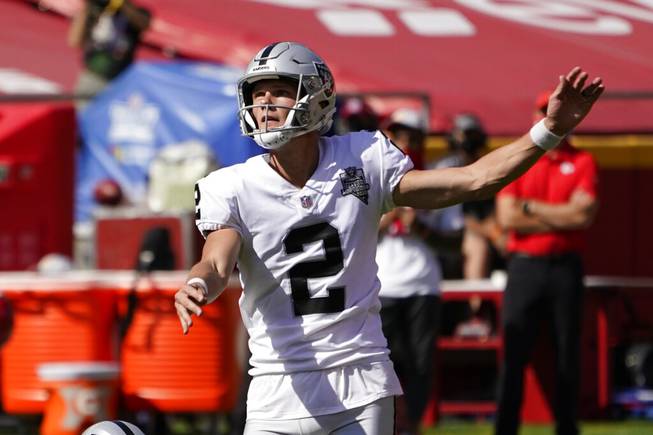 Las Vegas Raiders kicker Daniel Carlson (2) kicks a 38-yard field goal against the Kansas City Chiefs during the first half of an NFL football game, Sunday, Oct. 11, 2020, in Kansas City.

Props saved the day, or at least rescued it in time to make the experience only damaging, not fatal.

The Sunday Sweats column went 0-fer last week apart from a pair of prop wagers on the Raiders’ game — the second running as always on Sunday in the gameday section. Personally, that’s happened on more than one occasion this season.

Midway through the NFL year, I’m trending below average on sides’ plays but props have helped my bankroll stay afloat. They’re not going to be enough in this space, though.

After three straight losing weeks, I need to pick it up in some other categories to keep the season total — available at the bottom of the page — from dropping further down.

The total in this game closed at 48.5 when these two teams played in Week 1 at the Superdome. Where did the extra two points come from? It’s a question especially pertinent now that they’re playing in a less offensively friendly environment at Raymond James Stadium. It’s not like either of these teams have been offensive juggernauts either. On the contrary, Tampa Bay has been led by the best defense in the NFL and New Orelans’ stop unit is also coming around. I anticipate something like a 24-21 game.

If ever there was a week to skip a category, this might be it. I’m not seeing anything I like in the teasing realm, but alas, passing is not an option so let’s go with this one. Chicago’s defense should be able to limit Tennessee enough to stay in the game, and passing through the 7 and 10 in a game with a low total (47) isn’t a bad option. And if Houston can’t come off of a bye week to beat Jacksonville with Jake Luton, then it should be relegated to the Rock’s XFL.

Let’s gamble. South Point has better-than-market-average moneyline prices on perhaps my two favorite underdogs of the week. The Bills are at +140 instead of +135, and the Saints are at +190 instead of +180. It doesn’t look like a big difference, but like every other week, I just want to emphasize getting the best prices in this section. I price these games both closer to a coin flip than the market.

Anthony Lynn and Jon Gruden are two of the most conservative coaches in the NFL. They rarely ever show any hesitation sending out their field goal units on 4th-and-short situations, let alone early in the game. Yes, these are two great offenses that could easily march down the field and find the end zone on their first possession. But this line implies around a 65 percent chance that happens, and with these coaches, I think that’s a tad high. One last reminder: There will be another prop bet for this game in tomorrow’s gameday section, which will post tomorrow morning.

DiBenedetto has been the most underrated driver on short, 1.5-mile, 750-horsepower tracks like Phoenix all year. Anecdotally, he’s smashed most of these matchups against other middling drivers. He should have been a bigger favorite against them all season. He should be a bigger favorite now. Look for DiBenedetto to come through with another strong finish as NASCAR departs until next February.