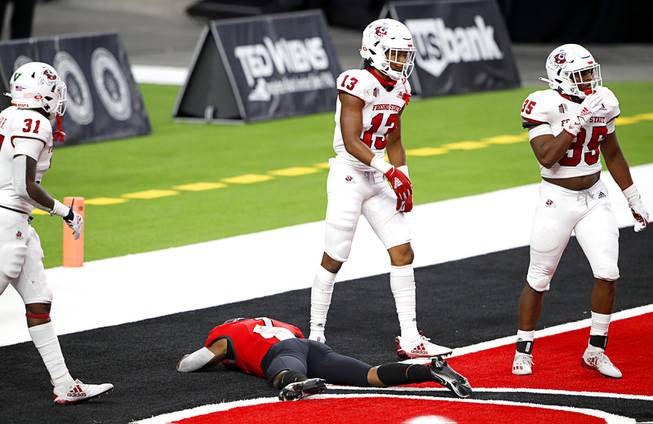 UNLV Rebels wide receiver Kyle Williams (1) is slow to get up after failing to make a reception in the end zone during the second half of a game against the Fresno State Bulldogs at Allegiant Stadium Saturday, Nov. 7, 2020. Bulldogs from left: Andrew Wright (31), Justin Houston (13), and Malachi Langley (35).

The good news is, for the first time in 2020 UNLV played like a football team that could win a couple games this season.

The bad news is, UNLV made too many mistakes — offense, defense and coaching — to pick up its first victory of the season on Saturday, as Fresno State pulled away in the fourth quarter to claim a 40-27 win at Allegiant Stadium.

Quarterback Max Gilliam gave UNLV a chance, and surprisingly he did it with his legs. Despite coming into the game with just four career rushing yards to his name, the senior kept the ball 16 times and ran for 139 yards, including a 71-yard scoring scamper, but it wasn’t enough.

UNLV’s execution going into and coming out of the halftime break told the story.

Gilliam took a deep shot midway through the second quarter and connected with Tyleek Collins for a 43-yard touchdown to put UNLV ahead, 17-13. After the defense forced a punt, Gilliam and the offense got the ball back with 2:54 left in the half.

Instead of padding the lead heading into halftime, they went 3-and-out, with Gilliam getting sacked on third down deep in UNLV territory. Fresno State got good field position after the punt, and five plays later running back Ronnie Rivers caught a pass on a short crossing route and turned upfield for a 33-yard touchdown.

Things got worse on the way out of the locker room. UNLV received the kickoff, and Gilliam was strip-sacked on the second play of the drive. Three plays later, Rivers took a handoff and skipped 16 yards into the end zone to make it 27-17 in favor of the visiting Bulldogs.

That disastrous sequence spanning halftime proved to be the turning point that kept UNLV from notching its first win under Arroyo.

“We’ve got to make sure we come out in the second half locked in and execute,” Arroyo said. “We put the defense in a tough situation there at the start of the drive. We fumbled there, we put ourselves against the wall and we’ve got to find a way to avoid that. It’s hard to overcome that.”

UNLV didn’t fold. Gilliam led a field-goal drive to make it 27-20, setting the stage for his magnificent touchdown run late in the third quarter

Gilliam dropped back on 2nd-and-10 but found no receivers open; a gap in the defensive line allowed him to burst up the middle into open space, and from there Gilliam veered down the right sideline, only having to outrun a safety over the final 10 yards. The UNLV sideline erupted as Gilliam crossed the goal line, and with the score tied, 27-27, it looked like anyone’s game.

UNLV did not score again.

The next Fresno State drive went 79 yards in 11 plays, capped off by a Rivers 10-yard touchdown run. Trailing by seven points on the ensuing possession, Gilliam forced a throw over the middle on third-and-long and was intercepted at the UNLV 22. Fresno State kicked a field goal to make it 37-27, and another Gilliam interception led to another field goal with two minutes remaining, sealing the final score.

Gilliam, the team’s surprise starter in Week 1, completed 15-of-31 passes for 160 yards with one touchdown and the two interceptions.

He didn’t take much satisfaction in his rushing totals, instead shouldering the blame for the offensive struggles down the stretch.

“If we’re not winning, I didn’t do my job,” Gilliam said. “When you have three turnovers in the second half, you’re probably not going to win.”

UNLV running back Charles Williams had a quiet day; the senior logged a career-high 27 carries but managed just 89 yards (3.3 yards per carry).

Arroyo also bore some responsibility for the team’s uneven play in the second half. In his third game as a head coach, he burned a timeout between the third and fourth quarters and also saw his offense take a delay of game penalty on the first play of a drive (the second straight week that has happened).

Arroyo chalked it up to a miscommunication between the sideline and the players.

“You’ve got to put two halves of football together,” Arroyo said. “It starts with the whole group. Coaches and players, we’ve got to continue to grind.”