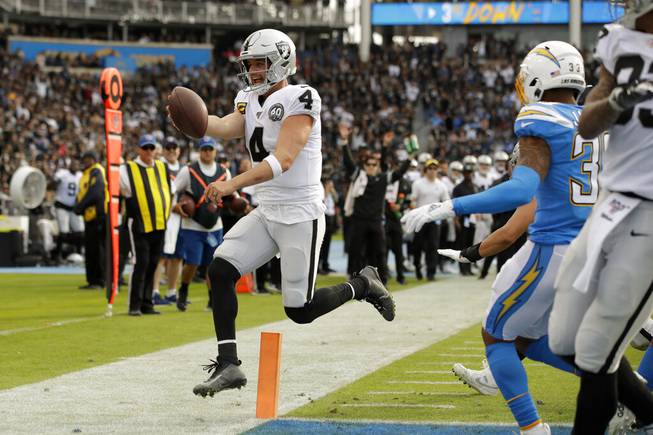 • Where: SoFi Stadium in Inglewood, Calif.

The Raiders enter a crucial stretch of their schedule with their first trip to the $5 billion SoFi Stadium in Inglewood, Calif. Starting with their game against the Chargers, the Raiders will play each of their AFC West rivals over the next three weeks. The Chargers are an ideal opponent to start the run, considering they’re sitting in last place in the division and currently carrying a lengthy injury report. On the other hand, Los Angeles might not be quite as bad as its record indicates. The Chargers have only a -6 point differential on the year, but they’ve blown four double-digit leads, including three in which they were up by 17 points or more. They’ve become an NFL punchline after surrendering a 24-3 third-quarter lead on the road against the Broncos last week, allowing a touchdown on the final play of the game to lose 31-30.

Josh Jacobs broke out in a 16-6 win against the Cleveland Browns last week, tallying 132 yards on 31 carries for his best game of the season. The second-year back has a great opportunity to keep it going against the Chargers. Los Angeles ranks 27th in the NFL in giving up 4.7 yards per rush attempt. The Chargers’ defensive line is extremely talented but constructed more around rushing the passer than stopping the run game. Stars like Joey Bosa and Melvin Ingram are going to sell out to get to Derek Carr rather than maintain gap control. Jacobs could have a free couple yards on many carries, and given his ability to break tackles and make well-timed cuts, those could turn into something bigger. “Breaking one,” so to speak, is a focus for Jacobs, as his longest run of the season has been only 16 yards.

The Raiders are confident they’ve improved in the defensive backfield over the last couple weeks. The Chargers will present a valuable litmus test. Rookie of the Year frontrunner Justin Herbert — the Oregon product is now a -110 favorite to win the award by the betting odds — sits ninth in the NFL in QBR with only two quarterbacks the Raiders have faced ahead of him. Those two, Patrick Mahomes and Josh Allen, burned the Raiders for a combined 628 yards and more than 8 yards per passing attempt. Las Vegas has made some strategic changes since those games, however, including mixing up its coverage packages more often and lining up players like Lamarcus Joyner in different positions. It also hopes to be buoyed by the return of rookie cornerback Damon Arnette, who had thumb surgery and missed the last four games, against Herbert and the Chargers.

• “I’ve pretty much forgotten who we drafted…We had a virtual draft, virtual offseason. Virtual is for the birds. I think it doesn’t help get these young guys as ready as it did in years past, but we like our young guys.” -Coach Jon Gruden when asked to assess this year’s rookie class

• “If we can hand the ball off 45 times a game every game, I would vote for that for sure.” -Good on his preferred offensive approach

• “We can show up on the concrete at six in the morning and we’re going to be ready to play ball.” -Safety Johnathan Abram on the mentality he helps instill to teammates

The Raiders’ star tight end has been quiet recently for his standards, failing to register more than 50 receiving yards in three straight games. He even had his first drop of the season on what looked like a sure third-down conversion against the Browns last week. The Chargers should represent a bounce-back opportunity. They’ve been terrible covering tight ends so far this season, ranking 29th in the NFL by Football Outsiders’ DVOA ratings. Intermediate routes will be open, and Carr rarely passes up an opportunity to get the ball to a player he regularly calls “the best tight end in football.” The 6-foot-6, 265-pound Waller leads the team with 61 targets on the season, 27 more than second-place Hunter Renfrow, and that gap should only increase in a game where he figures to be open frequently.

The Raiders’ all-time series record against the Chargers, and coincidentally, also the Raiders’ all-time series record against the Broncos. The two marks evened up last year when the Raiders swept two games against the Chargers while splitting with the Broncos. The Raiders went 3-3 against divisional foes in total last year, falling just short of posting their first winning record in AFC West games since 2010. It should be an emphasis to get over the hump this year and a 2-0 record to start, with a win at Kansas City already secured, would put Las Vegas in great position to do so. Curiously, the Raiders and Chargers haven’t split their two season meetings since 2013. In the six years that have followed, each team has swept the other on three occasions and only two of 12 games have been decided by more than a touchdown.

This total looks incredibly low for all the reasons covered above. And even though Waller’s yardage totals have decreased recently, his receptions have never waned. He’s caught at least five passes in all but one game this season — a 36-20 loss at New England where the Patriots concentrated their defensive entire scheme on shutting him down. The Chargers, in fairness, defended Waller similarly to the Patriots a year ago as he had only a total of seven catches in two games against them. But the Raiders have more offensive weapons this year to make it harder to run back the strategy and the Chargers’ struggles against tight ends are a new phenomenon this season. Waller should soar over this total.