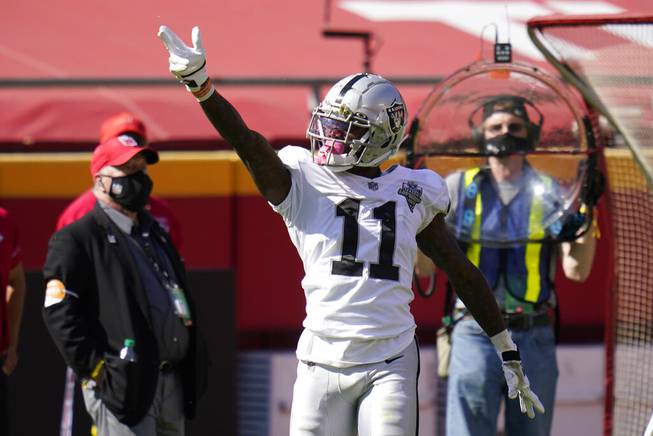 Las Vegas Raiders wide receiver Henry Ruggs III celebrates a first down after catching a pass during the first half of an NFL football game against the Kansas City Chiefs, Sunday, Oct. 11, 2020, in Kansas City.

The 2020 NFL Draft was always going to be a big one for the Raiders. With two first-round picks and five in the top 100, a strong haul from this year’s draft had the potential to boost Las Vegas’ rebuilding process into overdrive or, conversely, to throw it into neutral if the picks underperformed.

So, how did Mike Mayock and Jon Gruden do in their second draft together as the Raiders’ braintrust? Obviously it’s too early to write the book on any of the rookies, as they’ve only played half a season (and in the case of the injured rooks, less than that). But based on what we’ve seen so far, the draft has yielded mixed returns.

With that in mind, let’s see if we can grade the first-year players at the midway point of the season. A rookie who contributes immediately at a star level is an A+ grade, and from there it’s a combination of draft position, value, current production and future potential that determines the grade.

The Raiders were determined to add a big-play receiver this offseason, and they accomplished that goal — by signing veteran free agent Nelson Agholor. Most envisioned Ruggs, with his unparalleled speed, as that transformative downfield threat, but it’s been a roller coaster ride through the first eight weeks.

Ruggs has made a handful of splash plays, as evidenced by his 22.2 yards per reception, but he’s simply not a major factor in the offense yet. He missed a couple weeks due to an ankle injury, and his single-game high in targets is five (which came in Week 1). He caught two passes for 118 yards and a touchdown in Week 5 against Kansas City, and that looked like it could be a breakout, but Ruggs has caught just four passes since, including zero last week.

For now, it appears the game plan is to send Ruggs deep and take a shot or two each game, which is not ideal usage for a first-round pick. Part of that is Ruggs’ fault; he’s not a good enough route runner yet to separate consistently on conventional short and intermediate routes. It will be up to Gruden and offensive coordinator Greg Olson to come up with more creative ways to scheme him open and get the ball in his hands if they want Ruggs to be a more impactful player over the final eight weeks.

Long term, Ruggs is still a tremendous prospect. When he pulls away from a defender in the deep third of the field, it’s an amazing sight. But his future will depend on how well-rounded he becomes. Other first-round receivers are out-producing him, and it’s because they can get open in other ways. Ruggs will have to get better at that part of the game in order to justify his lofty draft position.

Arnette has only played three weeks — the first three weeks of the season — but has been out since then due to a thumb injury. He should return this week.

The toughest part about grading Arnette is that he simply hasn’t had the snaps. He’s a cornerback who relies on physicality, feel and guile more than any outstanding athletic traits, so he’s not the type of player who is going to flash. He’s more of a steady, like-him-better-the-more-you-see-him type. And we haven’t seen him much.

There was some sentiment that Las Vegas reached by drafting Arnette in the first round, and other rookie cornerbacks taken after him have played well. A strong second half by Arnette would dispel some of the nervousness surrounding that pick.

The logic behind this pick was there, if you squinted. The Raiders wanted to add offensive playmakers, and Bowden was a master at making defenders miss and snapping off big plays during his time at Kentucky. The problem was, he was a jack of all trades in college, logging time at quarterback, receiver and running back while mastering none of those positions.

Mayock and Gruden apparently profiled him as a running back and tried to convert him to that position full-time, which was a mistake in hindsight. The ceiling for a pass-catching running back is not very high (unless you’re Alvin Kamara), and Bowden just didn’t have the skill set for the position.

The good news is that the Raiders were able to recognize their mistake early, before the end of training camp. That allowed Mayock to trade Bowden and still receive nearly equal value in a fourth-round pick from Miami. Bowden has played four games for the Dolphins and has just five carries for eight yards.

Normally a draft bust as bad as Bowden would net an automatic failing grade, but since Las Vegas was able to move on quickly, this ultimately won’t hurt too much.

If these grades had been done after Week 3, Edwards’ mark would have been much higher. He was still riding high on training camp hype, and though he wasn’t targeted much in the first three games (just six looks from Derek Carr), he caught five of them for 99 yards. It was modest production, but still pretty good for a rookie receiver.

Edwards got hurt, though, and missed the next four games. He returned last week in the win over the Chargers but didn’t see any action. At this point he’s behind Agholor on the depth chart, and of the first-year pass catchers, the team seems more determined to work Ruggs into the game plan.

Edwards is still a prized prospect and the Raiders would still draft him at this spot, but any significant contributions might have to wait until next year.

In a draft that included some head-scratching decisions from the Raiders, the selection of Muse in the third round stands out as the most perplexing. A college safety without the physical profile to stick at that position, he was always a project as a pro linebacker. And even then, the athletic measurables still might not be good enough.

The low ceiling and questionable ability to change positions made Muse a risky pick in any round, but taking him in the third — and with a top 100 selection — was definitely an example of Mayock and Gruden sticking their necks out for a player they really liked. His pro day boosted his stock, and Mayock and Gruden bought high.

It’s gone horribly wrong since then. Muse didn’t distinguish himself at all in the offseason, and if it weren’t for his draft status he might have found himself on the roster bubble at the end of training camps. As it stands, he hasn’t played a single snap and is now on injured reserve with a toe injury.

Simpson is massive and powerful, and the Raiders are hoping that he’ll eventually prove to be a solid long-term replacement for starting right guard Gabe Jackson or left guard Richie Incognito. And he might end up being that.

Simpson has seen significant playing time this year due to injuries along the offensive line, and while he has struggled with the quickness of opposing defenders, he hasn’t looked entirely out of place. Given another couple years in the league, working with blocking gurus like Gruden and offensive line coach Tom Cable, it’s a good bet that Simpson will turn into a decent player.

I thought Robertson had a chance to win the No. 1 slot corner job this season, but he has seen very little playing time to this point with just 31 defensive snaps (eight over the last three games).

Given Robertson’s college production and fourth-round status, this still grades out as a good pick for the Raiders. And if he ascends to a starting job next year, the grade will only improve.

Zaon Collins makes it official by signing with UNLV