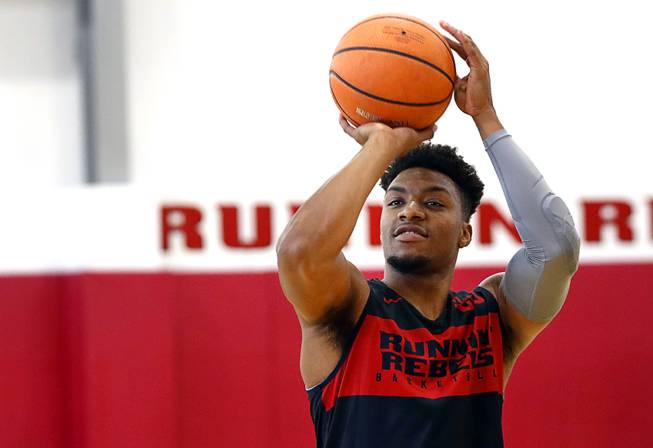 For Nick Blair, finishing career at UNLV was easy an decision –

Convincing Nick Blair to stay at UNLV for his senior season was a relatively simple process. The Las Vegas native came to the table with one stipulation for new coach T.J. Otzelberger: Offer me a scholarship and I’m yours.

Blair had every reason to believe he was worth it. Playing as a walk-on in 2018-19, the 6-foot-5 guard/forward clawed his way up from the bottom of the rotation and ended up logging important minutes for the Rebels, filling in on the perimeter and also holding his own as a small-ball frontcourt weapon. By the time the season ended, Blair was averaging 21.1 minutes per game.

After two years of paying his own way at UNLV (he redshirted as a transfer in 2017-18 after playing on scholarship his first two years at Idaho), Blair felt he had proven enough. He averaged 6.3 points and 5.3 rebounds per game as a junior, and in conference play he connected on 36.1 percent of his 3-point attempts. Down the stretch he emerged as one of the Rebels’ key frontcourt defenders despite his undersized stature.

His play was scholarship-worthy, but the situation was complicated by UNLV’s tumultuous offseason. Once Marvin Menzies was fired, Blair was unsure how the next head coach would value his skill set.

Blair put his name into the transfer portal with the goal of fielding scholarship offers, but his plan was always to give UNLV the first option.

“It was devastating when coach Menzies was let go,” Blair said. “At that moment I wasn’t sure who was coming. I wanted to talk to [the new coach], but I wanted to go into the portal just in case. I was fortunate enough to have had a good enough year that I wanted to so see if I could get someone to pay for my senior year somewhere else. I didn’t want all that hard work and patience and everything I put forth last year to go to waste. That was my main thing — hoping somebody could pay for my senior year.”

Blair received interest from other schools, but his free agency wrapped up quickly after meeting Otzelberger in person. The coach had done his homework and came in prepared to make an offer based on Blair’s play on the court.

Blair’s attitude only made the decision easier.

“I watched as much film as I could before I got here,” Otzelberger said. “So I had a feel for their game and what their strengths were, where were the areas where they could improve, where I thought they could be most effective moving forward. The neat thing about Nick is when I met with him individually, above and beyond the basketball part of it, Nick shared with me his desire to be a leader and how much it meant to him playing for UNLV.”

Blair accepted the offer and will remain at UNLV for his senior season. True to his plainspoken nature, Blair’s process was straightforward — No visits, no lists, no recruiting hype.

Once UNLV met his one and only request, Blair was happy to stick around and play for his hometown school.

“It was definitely tempting because it’s like being re-recruited all over again,” Blair said. “You get a chance to visit here and there, go through that whole process again. And it can be kind of fun. But I just wanted to keep it simple, keep it where it’s at. Once coach Otzelberger told me everything was good here and he was going to give me a scholarship, I was like, there’s no need to do all that [recruiting] when in reality I know I want to stay here and just keep it where it’s at.”

Blair’s willingness to embrace UNLV amid the coaching change only endeared him more to Otzelberger. Now the new coach envisions Blair as one of the team’s key leaders heading into the summer.

“His personality and character was a big part of it,” Otelberger said. “He said, ‘Coach, I want to be here. If you want me here and you see me as a guy that can be on scholarship, this is where I want to be.’ And that meant a lot to me, as opposed to saying, ‘Well I’m going to continue to weight options and take visits.’ He jumped in with two feet.”

With UNLV officially picking up the tab for Blair’s final year of college, he can now focus on his game. Blair flashed intriguing versatility last year, showing an ability to defend bigger players on the interior while possessing perimeter skills on the offensive end.

Otzelberger’s system is based around floor spacing and outside shooting, so Blair could conceivably factor in at a number of positions.

Blair is most comfortable on the wing at his natural small forward position, but he’s willing and prepared to play anywhere.

“One thing coach Otzelberger talked about was getting me to my true position, that 3 spot. And then he sees I’m capable of playing the 4 like shown last season. The 5 spot, I think we’ll keep that open. We’ve got some other guys that can play that spot, we’ve got some guys coming in that can stretch the floor out at that 5 spot, but if the day comes when we want to play super-small ball with me at the 5, I’m open to that.”

Otzelberger thinks Blair’s versatility will be an asset, especially when he’s lined up in the frontcourt.

“I see him more as a frontcourt, undersized, hard-playing, tough, aggressive type of guy,” Otzelberger said. “I think defensively he gives you a guy on the front line that’s very mobile, so he can guard multiple guys in different ways. Offensively he can pose a little bit of a mismatch where he can drive it to the rim on bigger guys and isolate.”

The decision on where to play Blair will likely take longer to settle than the senior’s transfer process. That turned out to be an easy call.

From functional to fancy, NFL stadiums have made a huge leap