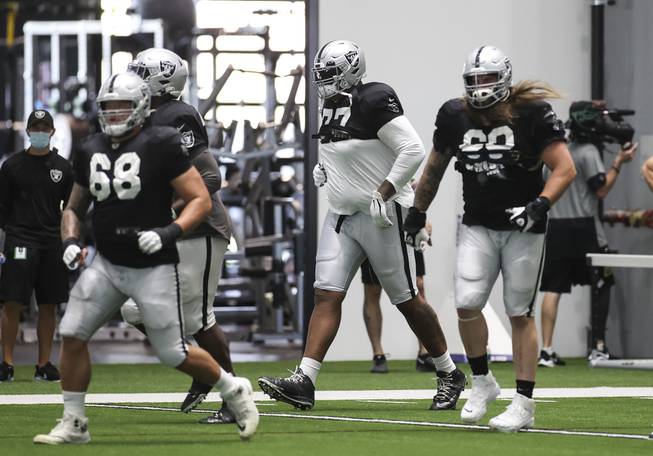 The Las Vegas Raiders’ Sunday Night Football debut will have to wait.

The NFL moved this week’s Buccaneers at Raiders game from 5:20 p.m. Sunday night to 1:05 p.m. Sunday afternoon. The shift follows a potential coronavirus outbreak for the Raiders, as right tackle Trent Brown was added to the COVID-19 list Wednesday and six of his teammates were sent home from team headquarters following contact tracing protocols.

All of those teammates — the entire starting offensive line plus safety Johnathan Abram — also missed practice Thursday, putting the status of Sunday’s game in doubt entirely. But the NFL said it expected the game to be played in a statement.

“These decisions were made out of an abundance of caution to ensure a game would be played for fans on Sunday Night Football,” the statement read.

An NFC West showdown between the Seattle Seahawks and Arizona Cardinals has been moved to NBC’s Sunday Night Football slot. Fox will now broadcast Buccaneers at Raiders, assuming it’s played.

News broke Thursday afternoon right as the Raiders were holding their daily news conference, and neither offensive coordinator Greg Olsen nor defensive lineman Clelin Ferrell were aware of the change.

“We could line up and play tomorrow,” Ferrell said. “We’re going to be ready regardless.”

The episode is the latest in a season-long saga of the Raiders dealing with coronavirus. Despite coach Jon Gruden insisting the team is doing an “excellent job” following league protocols, the Raiders have already been fined for violations on two previous occasions.

Now they’re under investigation again, according to NFL Network. Tom Pelissero reported that Brown hadn’t consistently worn his tracking device, mandatory while players are at the team facility, and the offensive line spent time together without masks on.

The Raiders are still currently scheduled to play on Sunday Night Football on November 22 at home against the Kansas City Chiefs.