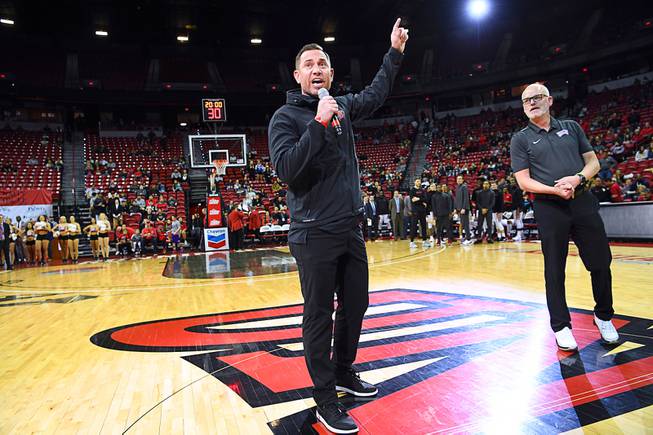 Marcus Arroyo’s first big decision as UNLV’s head football coach turned out badly, but you can’t blame him too much for it.

Arroyo can at least take solace in knowing that there was ultimately no correct answer to the quarterback question. Oblad hit on 2-of-4 passes for two yards and also barely escaped an interception. After his two possessions under center, it was time for Rogers, a sophomore transfer, to show his stuff. He, like Gilliam, threw for negative yardage while completing 2-of-4 passes.

After all three quarterbacks had the opportunity to lead multiple drives, they had accounted for just a single first down in the opening half. San Diego State’s offense notched 17. And SDSU outgained UNLV by a margin of 313 yards to 25 yards en route to a 27-0 lead heading into the locker room.

For an offensive-minded coach, it was a brutal start to Arroyo’s tenure at UNLV.

After the game, Arroyo said none of the quarterbacks distinguished themselves and reiterated that the starting job is still up for grabs.

“Right now we’re in a reps industry,” Arroyo said. “Getting a chance to see all those guys, they were all told they were going to play…We’ll continue to evaluate that position no different than anything else.”

While the passing game stalled completely, the running game never really got a chance to get on track. Senior running back Charles Williams got just four carries in the first half, and by the time UNLV started feeding him in the second half (he finished with a respectable 80 yards on 20 carries) the game was far out of reach.

Defensively there were just as many problems. Tackling was, predictably, a huge issue as UNLV could not bring down ball carriers with any consistency. San Diego State averaged 6.4 yards per play in the first half and gained an astounding 6.9 yards per rush.

Special teams was messy in every aspect. UNLV missed a field goal, missed an extra point, had a punt blocked and shanked a punt. The shank came with less than a minute to play in the first half and allowed SDSU to drive a short field and tack on a field goal at the buzzer.

After his trying debut, Arroyo preached patience in his post-game press conference.

“We didn’t get what we wanted tonight, but I think we’re going to learn from this,” Arroyo said. “[The players] are hurting. I think we all are. We’ll play better. We’ll be a better team for it, regardless.”

UNLV had a chance — albeit a slim one — of making it a game in the second half, but they were ultimately unable to make it happen.

Gilliam and Williams started the modest comeback effort by leading a touchdown drive to open the second half. Gilliam hit receiver Steve Jenkins with a 17-yard scoring pass to make it 27-6, and after the UNLV defense forced a 3-and-out, Gilliam and Williams led another long drive deep into SDSU territory.

Facing a 4th-and-3 from the SDSU 4-yard line, Arroyo called timeout to set up a lateral pass to receiver Tyleek Collins out of the backfield. The play went nowhere and Collins was surrounded and tackled for an 11-yard loss.

It was one of 14 plays on the night that lost yards for UNLV.

Five plays later, San Diego State scored on a 19-yard run by Chance Bell to make it 34-6 and slam the door shut on Arroyo’s first game as a head coach.

Arroyo would be wise not to dwell on the loss for too long, because the next game on the schedule is far more important to UNLV fans. The Fremont Cannon will be on the line when UNLV hosts its first home game at Allegiant Stadium on Oct. 31 against rival UNR; win that one, and the scarlet and grey diehards will scarcely remember how badly things went in Week 1.