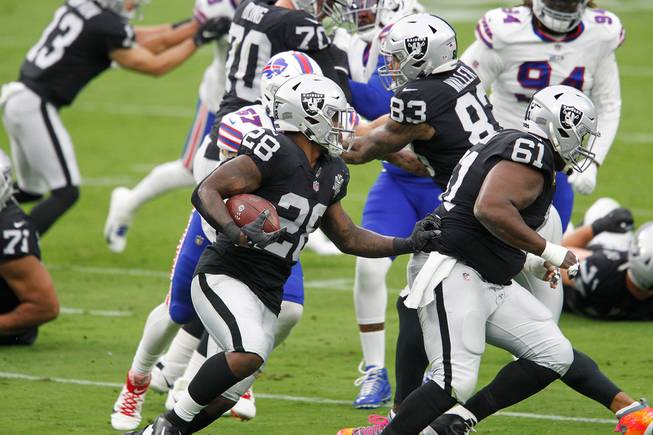 The Raiders’ coaching staff routinely refers to the team’s offensive line as the best in the NFL.

Now comes a chance for Las Vegas’ offensive linemen to prove they belong in that conversation. Between tackle Trent Brown coming off the COVID-19 list to practice on Friday and potentially playing on Sunday and guard Richie Incognito expected to follow in the coming weeks, the Raiders are finally getting healthy up front.

“We always mention continuity up front,” Raiders offensive coordinator Greg Olson said this week when asked about recent struggles in the run game. “That’s a big part of it — getting our five guys together. It’s an evolving process.”

It’s been an uncommonly smooth week of practice for the Las Vegas offensive line heading into its 10 a.m. game Sunday at Cleveland with Brown returning on schedule from last week’s fiasco. After Brown tested positive, the rest of the starting offensive linemen were forced to quarantine and not partake in a single practice heading into last Sunday’s loss to Tampa Bay.

They’ve been back this week and gotten plenty of reps in to prepare for a Browns’ defensive front led by Myles Garrett, arguably the best edge rusher in the league. All things considered, they’ve looked great not only in practice but dating back to the Buccaneers game, according to the coaches.

Statistically speaking, their performance against the Buccaneers graded out quite a bit below Gruden’s characterization. Running back Josh Jacobs had a dearth of open lanes, causing a career-low in rushing yards, and quarterback Derek Carr got sacked three times and hit five more.

It’s difficult to pass off that level of disruption up front as a successful day from an offensive line perspective. The trouble kept the unit in the bottom half of the league by both Football Outsiders’ and Pro Football Focus’s ranking systems.

But it was also just a game ago that the Raiders had their best blocking day of the season as they kept the Kansas City Chiefs at bay in a 40-32 victory on the road. That was perhaps not coincidentally the lone game this season where Brown played throughout.

“He’s just a freak,” Jacobs said of Brown. “When he’s healthy, there’s nobody like him.”

There’s been a lot of frustration with Brown this season, if not internally among the Raiders, then at least externally. A calf injury that flared up in the first series of the season kept him out longer than expected, denying him the opportunity to live up to his status as the Raiders’ second highest-paid player.

Brown’s four-year, $66 million deal was the largest contract ever signed by an offensive lineman last offseason, and though he made the Pro Bowl in his first year as a Raider, it’s come with a fair bit of scrutiny. The former San Francisco 49er and New England Patriot is a punching bag on social media with memes and questions about his work ethic, which have followed his whole career.

“I don’t live for anybody’s compliments and I’m not going to die by their criticisms,” Brown said before the Chiefs game in his only media conference of the year. “I’m a man first and foremost. I didn’t get this far by listening to all the naysayers and doubters.”

Although Incognito has graded out as the Raiders’ best lineman over the last two years by a considerable margin according to Pro Football Focus, Brown remains essential. If he plays Sunday, he might be the key to slowing Garrett.

The Raiders are hoping he stays healthy and becomes key to bringing the most out of a group they have the utmost confidence in.

“He’s a great player, an All-Pro,” Gruden said of his confidence in Brown playing without much practice. “I think it starts there.”