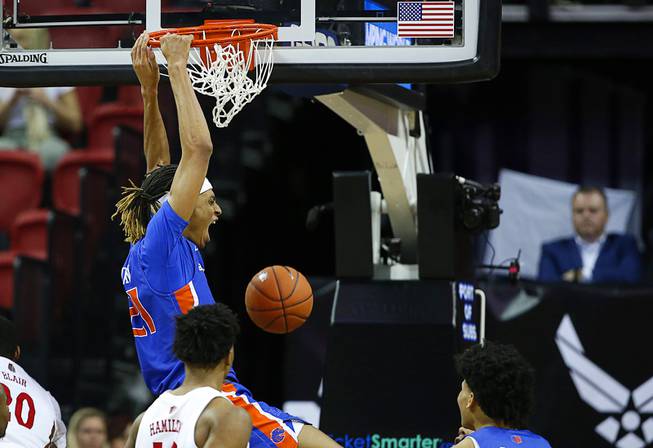 Boise State Broncos guard Derrick Alston (21) hangs on the rim after dunking against UNLV during the Mountain West tournament at the Thomas & Mack Center Thursday, March 5, 2020.

Voting is an important civic duty, so on Monday I made up my mind, checked off all the boxes and sent in my ballot — my Mountain West basketball preseason awards ballot, that is.

Now, casting my choice for the Mountain West Freshman of the Year (and other superlatives) is not the most important race being decided this week, but it does matter to a lot of people. And since this was my first time being asked to vote for official Mountain West awards, I carefully considered the options and tried to make the best choices I could. I’ll try to explain my reasoning below.

The All-Mountain West team was pretty cut and dried in my mind. There are no positional requirements, so the objective is to recognize the five best players, even if that ends up being five guards or five centers. I think my ballot accomplishes that; the fact that it ended up being a positionally realistic starting five was just a bonus.

Derrick Alston and Neemias Queta were locks, as was UNLV guard Bryce Hamilton. UNLV newcomer David Jenkins requires some projection, as he’s jumping from the Summit League to the Mountain West, but I think he’ll be a worthy all-league selection when all is said and done. That left the fifth spot as a choice between San Diego State forward Matt Mitchell and Colorado State guard Isaiah Stevens.

Stevens really caught my attention as a freshman last year, when he scored 13.3 points per game while hitting 38.0 percent of his 3-pointers. I think he’s poised for a big year, but Mitchell got the nod due to his production (12.2 points, 4.8 rebounds, 39.3 3FG% last year) and his status as a leader on a team that almost went undefeated last season.

Maybe by the end of the year, Stevens or someone else will play their way onto the All-MWC team; for now, Mitchell is the proven choice.

Preseason Player of the Year

This was a two-man race between Alston and Queta, and though I may be the biggest Queta cheerleader in the media, I ultimately went with Alston due to his dynamism on both ends of the court.

Queta is far and away the best defensive player in the league, but Alston is a strong defender as well, and as a 6-foot-9 wing, he is super versatile on offense as well. The same can’t be said of Queta, who is a good but not great offensive player.

Alston didn’t shoot the ball particularly well last year as a junior (a career-low 33.5 percent from 3-point range), but he still scored 17.3 points per game and posted good efficiency thanks to his ability to get to the free-throw line to cash in (80.8 percent).

Hamilton and/or Jenkins could end up making a push for this award over the course of the season, but right now Alston is the POY.

Preseason Freshman of the Year

UNLV guard Nick Blake is the highest ranked incoming recruit in the conference (No. 154 in the 247 Sports ratings), but he’s got a stacked depth chart in front of him. With Hamilton and Jenkins handling the scoring duties for UNLV and Marvin Coleman running the point, Blake could play a big role this season but not have the numbers to show for it.

Evans, on the other hand, is a quality recruit (No. 231 overall, third in the MWC) and stepping into a situation where he could be an immediate contributor. San Diego State graduated some key perimeter players, so the 6-foot-6 Evans should be an impact swingman in Year 1.

Preseason Newcomer of the Year

This award is Jenkins’ to lose. He was a bona fide superstar at South Dakota State (19.7 points per game, 45.3 3FG% in 2018-19), and given a redshirt year to get acclimated to UNLV he should flourish again under his old coach T.J. Otzelberger.

Jenkins will start right away, put up a ton of shots and log his share of high-scoring games. Unless something drastic happens, I think this is the biggest lock on the ballot.

UNLV, Boise State and Utah State can be considered Tier 2, and I think UNLV has an edge due to the wing duo of Hamilton and Jenkins. If those two play well on a nightly basis, that’s not something the rest of the league is equipped to deal with. I thought UNLV was playing the best out of anyone in the MWC at the end of last year before injuries set in, and I expect Otzelberger to carry that momentum through the 2020-21 campaign.

Boise State has Alston and some intriguing transfers, and Utah State has perhaps the league’s best frontcourt with Queta and forward Justin Bean. Both could challenge for the top spot.

Aside from those four teams, I don’t think anyone else is capable of winning the regular season title.

And that’s my ballot. Some of it will align with the consensus view of the rest of the MWC media, and some of it will look extremely bad in hindsight after the games have been played.