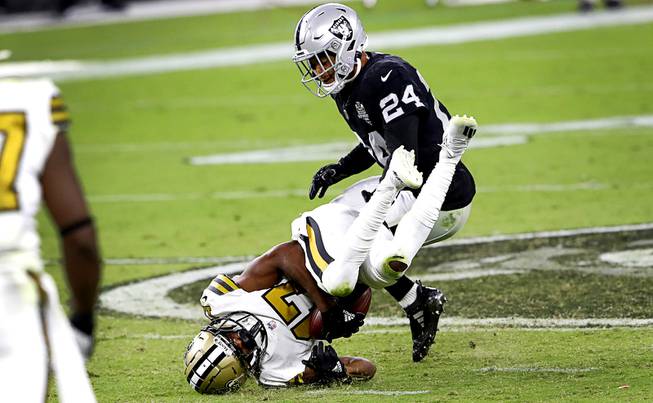 Derek Carr cedes to no one.

The seventh-year quarterback and sixth-year captain is the voice of the Raiders’ locker room, which he indirectly makes known after every game with the team’s longest and most thoughtful news conferences. That’s why it felt so out of the ordinary when he ended his Zoom call with media abruptly after a 16-6 win over the Browns on Sunday, at the first sight of an approaching teammate at FirstEnergy Stadium in Cleveland.

“I’ll let y’all talk to (Johnathan) Abram,” he said. “I’m sure you guys will be very interested by that, just like I am.”

It wasn’t a cheap escape tactic or said totally in jest; Carr was right.

As Abram slid onto the screen behind Carr and began praising him, it became apparent that the second-year strong safety might be the only player on the roster who could upstage the veteran quarterback.

“He just has this presence about him,” Raiders coach Jon Gruden said on Monday. “A playing style, a leadership, a playmaking we need. We feed off that, and it was obvious again yesterday.”

Abram returned from a one-game absence as a result of coming into contact with right tackle Trent Brown, who tested positive for coronavirus, and further solidified his unique if not vital role with the Raiders. The Mississippi State product, former first-round pick is the talisman of the Raiders’ defense, if not the fulcrum of the whole team emotionally.

That doesn’t mean he’s one of the most Raiders’ valuable players. In fact, some may argue he’s not valuable at all from an on-field perspective.

The 24-year-old fireball is trending toward becoming quite the divisive player. There are those who would argue his hard-hitting energy make him a foundational player and then those who would counter and characterize him as too reckless.

Just know the Raiders are firmly in the former category and looking forward to Abram anchoring their defense for years to come.

Objective achieved on that front, as Abram has administered his share of punishing hits to become an enforcer particularly against opposing run games. He even bothered the Browns as a blitzer on a couple occasions Sunday, though his lone sack didn’t count because he jumped offsides.

Detractors would say he’s committed too many similar miscues, especially for a defensive back who doesn’t contribute much in pass coverage. Sometimes overly aggressive, Abram has a tendency to miss tackles and allow for big plays.

To his credit, he’s improved since a particularly rough game against the Patriots with the coaching staff stressing to be more careful.

“I think John is one of those players who is truly all gas, no brakes,” O’Neil said. “In my experience in this league, it’s a lot easier to slow guys down than it is to speed them up. I think as John plays more and more and more he’s going to understand those situations where he can take a shot or when he’s got to come under control and secure a good tackle or come under control and continue leverage in coverage.”

Abram may also deserve some slack because this is more or less his rookie season. He tore his rotator cuff and labrum in his NFL debut last year, missing the rest of the season after Week 1.

Still, at least for now, he’s always going to look better anecdotally than statistically. Even if he shows some improvement, it’s hard to imagine him ever emerging as a darling of something like Pro Football Focus’ player grades where he’s currently rated as a replacement-level player.

But that’s not something the Raiders are concerned about.

“He has a playing style that I like,” Gruden said. “I think I compared him to the ex-Charger, ex-Patriot great Rodney Harrison. He just has that physical gameday presence that we feel like we need back in this organization. He still has a long way to go to become a great safety, but I think he sees the splash plays that he’s capable of making and he brings us some leadership and energy that we really need in the back end.”

The Raiders show their confidence level in Abrams by his playing time. Despite missing a game, he’s fourth on the defense — behind linebacker Cory Littleton, free safety Erik Harris and cornerback Trayvon Mullen — with 360 defensive snaps.

In the last two games when he’s been active, he’s combined to play all but two snaps.  And on all of them, he’s given the Raiders a mentality they don’t get anywhere else.

“It doesn’t matter where we go or where we at,” Abram said after the Browns win in the adverse weather conditions. “We can show up at the concrete at 6 in the morning and we are going to be ready to play ball.”