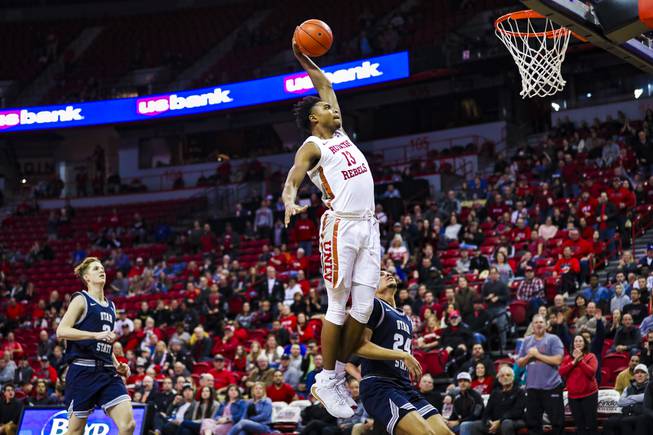 UNLV’s Bryce Hamilton dunks the ball during a game against Utah State at the Thomas & Mack Center, Wednesday, Jan. 1, 2020.

UNLV should be able to make a run at a Mountain West title this season, and apparently the league’s media contingent agrees, as T.J. Otzelberger’s squad was picked fourth in the preseason poll released on Wednesday.

Though UNLV didn’t garner any first-place votes — those were gobbled up by first-place San Diego State (14 votes), second-place Boise State (four) and third-place Utah State (2) — it is the scarlet and grey’s highest projected finish in a preseason poll since they were picked fourth prior to the 2015-16 campaign. And the voters seem to believe UNLV is stocked with talent, judging by the individual honors.

Hamilton’s expected backcourt partner, junior David Jenkins, was named Newcomer of the Year. Jenkins averaged 19.7 points and made 45.3 percent of his 3-pointers in 2018-19, when he played under Otzelberger at South Dakota State.

Nick Blake was named Freshman of the Year. Blake, a Las Vegas native, is the highest-rated recruit in UNLV’s incoming class. He is the first UNLV player to earn the league’s preseason frosh honors since Brandon McCoy in 2018-19.

UNLV outperformed expectations last year, as Otzelberger coached the team to a 17-15 record and a 12-6 mark in the Mountain West. The team got better as the season progressed and appeared to be peaking in March until an ankle injury sidelined point guard Elijah Mitrou-Long for the conference tournament. If UNLV can continue that momentum and players like Jenkins and Blake can make significant contributions, it’s not farfetched to think UNLV could challenge for the MWC crown in 2020-21.

Player of the Year

Newcomer of the Year

Freshman of the Year