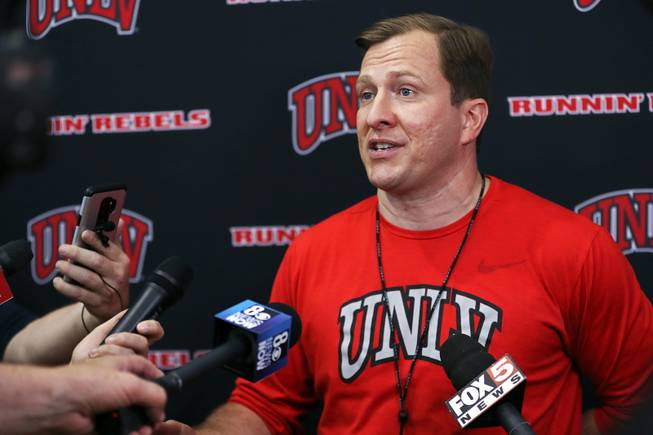 Believe it or not, the start of college basketball season is just two weeks away, and this is shaping up to be a big year for UNLV.

It’s the second campaign under coach T.J. Otzelberger, and he’ll be working with one of the program’s most talented rosters in years, led by the Mountain West’s top backcourt. We haven’t seen much of the team yet — no practices have been open to media, obviously, and more than half of the roster is made up of newcomers, so we still have a lot to learn about this squad. But there are a few things we can take to the bank already.

Here’s what we know about UNLV after a long offseason:

The four-guard lineup is back on the menu

Of all the positive signs around this team, this might be the biggest reason for optimism. UNLV really took off last year after latching onto a four-guard lineup — first by necessity, then by ingenuity — and at Wednesday’s Mountain West media day session, Otzelberger got pretty close to saying he’s all-in on four guards for 2020-21.

“It’s something we’ve definitely been embracing on the practice court,” Otzelberger said. “It’s something that’s becoming more and more prevalent in basketball and I think that’s because there’s fewer guys that want to play that physical power game around the rim. We’re going to have a steady diet of four guards out there on the court for us this season. Similar to last year, we think we can use some of that quickness and speed and ball pressure to help us generate some offense.”

That’s probably the right strategic approach, as UNLV is top-heavy in the backcourt. When all your best players are guards, you might as well put them on the court together and find a way to make it work for you. And that seems to be Otzelberger’s plan.

Marvin Coleman is the unquestioned leader

Otzelberger tiptoed right up to the line on the topic of four guards, but he left no room for interpretation when discussing whose team this will be.

That’s right, after his emergence last year (6.9 points, 4.8 rebounds, 2.3 assists) Coleman has gone from feel-good story to legitimate program cornerstone. Otzelberger knows this team has a chance to be good this year, and he trusts Coleman completely to handle the reins.

“Marvin is a coach on the floor for us,” Otzelberger said. “I trust him with our program as much as anybody. He’s somebody we can count on each and every day. He wants this program to do well. Winning is at forefront of every decision he makes. He’s a tremendous teammate, he thinks about others around him. We’ve entrusted Marvin with a whole lot of leadership in this program and we will continue to do that going forward.”

Coleman’s leadership was valuable during the long offseason, when he helped to organize video chats and other camaraderie-building experiences. Now it’s time for the Las Vegas native to lead on the court, with his play and his example.

“I take [the leadership role] with great pride,” Coleman said. “My role is to make sure everybody gets in the right spots, to command the huddles, and do everything I can on a day-to-day basis. It’s more than just being on the basketball court; it’s winning at everything I do in life.”

The team is loaded at the top

Bryce Hamilton was chosen to the Mountain West’s preseason all-conference team, and David Jenkins was selected as the Newcomer of the Year. Together they could team up to score 40 points per game while super-charging the UNLV offense, with Hamilton working the mid-range and driving lanes while Jenkins makes it rain from 3.

No other team in the league sports a wing duo with as much explosive potential. Otzelberger will mold the offense around Hamilton and Jenkins, and the results should be electric.

The middle of the roster is still undefined

With Coleman, Hamilton, Jenkins and senior center Mbacke Diong set to start, the top of the rotation is pretty solidified. The next tier — players 5-9 on the depth chart — is less clear.

Otzelberger has a bunch of options to fill out the rest of the rotation, and they each bring a different dynamic. Freshman guard Nick Blake is long and full of potential, junior big man Edoardo Del Cadia has offensive skill but no defensive home, sophomore guard Caleb Grill might be the best backcourt defender on the roster, sophomore forward Moses Wood can shoot, and freshman forward Devin Tillis is an excellent passer. And none of them has ever played a single minute for UNLV.

That means this particular group is one big question mark. Most of the season will probably be spent figuring out which combinations of players work well together, and how to best utilize everyone to get the most out of the sum of the parts.

Depth is a concern

Once you get toward the bottom third of the roster, warning signs start flashing. Does UNLV have a legitimate backup point guard behind Coleman? Is there a big man who can defend the rim if Diong gets in foul trouble? Is there enough shooting depth if Jenkins has to miss games due to COVID (or a regular injury)?

All the depth guys at the bottom of the roster are freshmen: guards Donavan Yap and Isaac Lindsey, forward Reese Brown and center Jhaylon Martinez. There’s some potential in that group, but will any of them be capable of stepping up for double-digit minutes in an emergency situation?

One great sign for UNLV under Otzelberger is how the team improved as last season went along. They ended the regular season on a hot streak and peaked in March, when they finally figured out how to win. So they’re good to charge out of the gate in a couple weeks, right?

It would be presumptuous to assume the 2020-21 squad will just pick up right where last year’s team left off. Three key starters return, and Jenkins and Wood were on the roster last year as redshirts, but everyone else is brand new to the program. Considering it took the 19-20 crew about three months to buy in, the carryover might not be immediate.

How long will it take for UNLV to really lock in? One month? Two months? Somewhere in between? We won’t know until they take the court, but odds are Otzelberger will have them where he wants them at the end of the season.

COVID-19 looms over everything

This is an obvious one. The ongoing pandemic has literally changed the face of the 2020-21 season already, with more league games, extended road trips and consecutive games against the same opponent, and that’s just the beginning.

Infections will happen. As we’re seeing with Mountain West football, games will be canceled. Just one or two positive tests on a basketball team will be enough to shut down activities and postpone/cancel games, and every school is probably going to have to play without key players at some point.

Mental toughness will be more important than ever. Which teams have the depth to withstand it and the fortitude to push through it? If UNLV can make itself into one of those teams, they’ve got the talent to contend for the Mountain West crown.