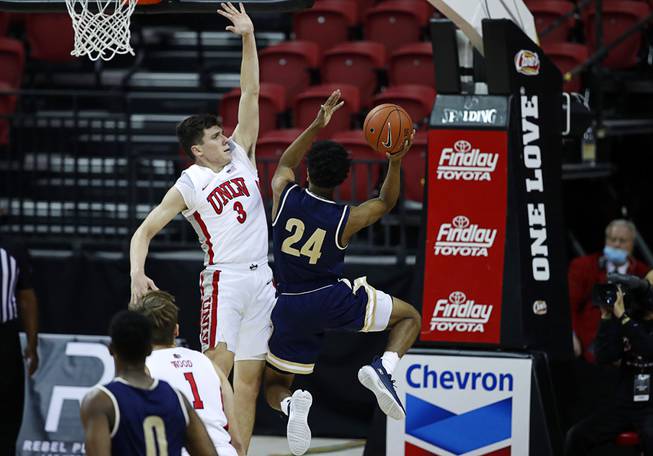 UNLV works out the kinks in blowout win over Saint Katherine

Running offense against man and zone defenses. Nailing down help defense against pick-and-rolls. Building endurance and fitness at game speed. If that sounds like an agenda that a coach might lay out for a Tuesday afternoon practice, it’s because it’s not far off.

It’s also a list of what UNLV accomplished in its 95-34 win over Saint Katherine at the Thomas & Mack Center.

UNLV head coach T.J. Otzelberger scheduled Saint Katherine, an NAIA team, just last week so his squad wouldn’t go seven days between Mountain West games (after being forced to take 34 days off due to COVID-19 protocols), and after dropping the Firebirds with ease he was satisfied with the aforementioned fine-tuning his team was able to squeeze into 40 non-competitive minutes.

Otzelberger also seemed relieved to play a home game for the first time since the season opener on Nov. 25.

“It’s been well over a month since we’ve had a chance to play here, so to be back in our building and have that opportunity is huge,” Otzelberger said. “We’re getting ready to have four home conference games, with another [NAIA] game in between, and so as you have those opportunities there’s a lot of things that help prepare you. And this opportunity is one of those. We’re appreciative to be able to find somebody on short notice that can come in to play and get us that experience. I’m confident that will pay off for us as we move forward.”

The action on the court never even rose to the level of a scrimmage, as UNLV put the score out of reach early and spent most of the contest focusing on the practice-like elements. Mbacke Diong scored a game-high 18 points and grabbed 10 rebounds, while David Jenkins (17 points), Moses Wood (17) and Bryce Hamilton (15) provided plenty of offensive support.

UNLV really clamped down on the defensive end and dominated Saint Katherine with superior length, holding the Firebirds to 9-of-42 from the field and 2-of-19 from 3-point range. During one 22-minute stretch that spanned the first and second halves, UNLV held Saint Katherine to six points.

Despite his season high in points, Diong pointed to the team-wide defensive effort as something that will need to continue if UNLV wants to turn around its season when the real games resume.

“Our focus for this team is on the other end of the court, the defensive end,” Diong said. “We can score. We’ve got shooters, we’ve got drivers and all that. We just need to be better on defense and trust what the coaches are telling us and apply it on the court.”

UNLV is now 2-6 on the year (Tuesday’s game counts as a regular-season contest for the scarlet and gray, even though it goes down as an exhibition for Saint Katherine). Next up will be a struggling New Mexico team that is, like UNLV, winless in Mountain West play (0-6 MWC, 3-6 overall).

Junior guard Marvin Coleman returned to the team after passing through medical protocols and played 20 minutes off the bench, accumulating six points and six assists. Getting him up to speed before resuming conference play was another added benefit of scheduling Saint Katherine.

“It was great to have him because he’s one of leaders of team, one of the captains of team,” Diong said. “He played his heart out. He always brings energy and leadership, trying to make guys be in their spot, trying to get us in the right position as a point guard. We were really excited to have him back.”