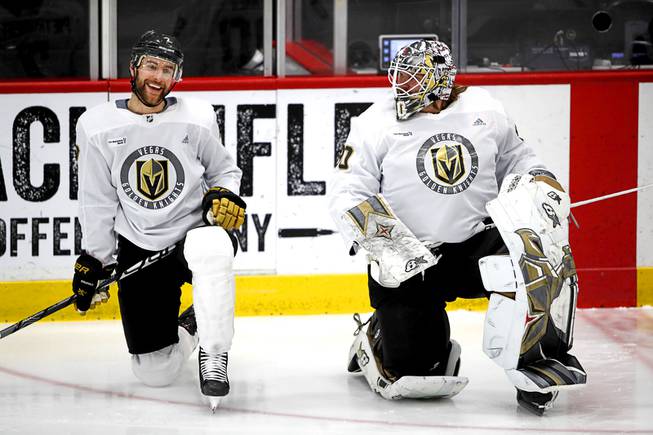 It’s going to take even the most ardent hockey fans time to adjust to the new divisional groupings the NHL put together for the 2021 season. So, let’s get to know the four new divisions in the most Las Vegas way possible—by handicapping them.

All odds come from the Westgate Las Vegas SuperBook.

• Outlook: Playoff disappointments shouldn’t distract from the fact that the Maple Leafs have been one of the most efficient teams in the NHL the past two years. Behind the continued progress of 24-year-old superstar Auston Matthews, they’re going to be even better this year and perhaps threaten for the Presidents’ Trophy (for the best regular-season record).

The consensus is that Toronto is much better than the rest of the Canadian franchises, but it might be in for more competition than expected. Montreal is well-rounded and has the division’s best goaltending with the duo of Carey Price and Brandon Allen. Calgary is one season removed from being one of the best teams in the league and showed flashes of getting back to that level by nearly beating Dallas in an early playoff series.

Edmonton’s top-end talent with Connor McDavid and reigning Hart Trophy (MVP) winner Leon Draisaitl should be enough to help it edge Vancouver, still too young, and Winnipeg, too reliant on goalie Connor Hellebuyck, for the final playoff spot. Ottawa is a nonfactor as it continues a seemingly never-ending rebuild.

With the setup of this year’s season, a natural joke among hockey fans was that of course the NHL found a way to make sure a Canadian team would reach the final four. The irony is, with as strong as the top three Canadian teams look, they might have threatened to do so anyway.

■ Bets: Pittsburgh 4-to-1 to win the division, Washington not to make the playoffs at +145, New York Islanders under 62.5 points.

• Outlook:There seems to be a perception that the Penguins are past their championship window while the Capitals might have enough to make one last gasp. What if it’s exactly the opposite? Pittsburgh might have been the most beaten-up team in the NHL last season and still posted a better goal differential than Washington.

The decline in Pittsburgh’s stock seems to be a result of two consecutive playoff flameouts, which is unfair. It’s also unwise to doubt a team with Sidney Crosby and Evgeni Malkin. The Penguins are less flawed than Washington, which is one of the NHL’s worst defensive teams and is now throwing second-year goalie Ilya Samsonov into the fire.

Pittsburgh will challenge Boston for a division title. The Bruins, the defending Presidents’ Trophy winner, are still the best team but must deal with injuries to start the season, including to their best player, David Pastrnak.

The Flyers, despite getting hot at the end of the last regular season, ultimately don’t have the starpower to keep up at the top of the standings. They’re going to be in a struggle with the Capitals, Islanders and Rangers for the final two playoff spots.

The Devils and Sabres have no chance and were unlucky to get forced into this gauntlet.

• Outlook:Tampa Bay, the defending champion, is still the best team in the league and deserves to be the Stanley Cup favorite over Colorado, which it’s currently trailing in the odds. Look to bet on the Lightning midseason at inflated prices, however, because much like last year, it’s going to take them a while to round into form.

Fatigued from their short offseason and adjusting to life without their best player, Nikita Kucherov, Tampa Bay should start relatively slow. The Lightning could start so slow that they can’t catch Carolina in the standings. The Hurricanes are a sleeping giant ready to fully awaken this season.

Carolina has got one of the NHL’s best top lines—Andrei Svechnikov, Sebastian Aho and Teuvo Teravainen—along with a star defenseman in Dougie Hamilton, and the Hurricanes pressure opponents into oblivion. Carolina will be too much for every team other than Tampa Bay in the Central.

Dallas caught fire and overperformed to reach the Stanley Cup Final last year but should take a step back. Nashville and Columbus are pests but don’t have the offense to be considered true contenders. Chicago and Detroit have eyes on the 2021 NHL Entry Draft.

Florida could surprise if goalie Sergei Bobrovsky proves a disastrous season a year ago was an anomaly, but it’s still far behind Tampa Bay and Carolina.

• Outlook: Colorado and Vegas are commanding so much hype, it appears everyone has forgotten about St. Louis. Don’t. The Blues are every bit as good as the Avalanche and Golden Knights. The Blues actually had a higher point total than both last regular season.

Yes, they lost captain Alex Pietrangelo to the Golden Knights but were quick to replace him with former Bruin Torey Krug, perhaps the next-best defenseman available on the free-agent market. The Blues, Golden Knights and Avalanche are going to beat up on each other all season while ganging up to stomp the rest of the West.

The divisional race will come down to the final weeks, with the big three all compact near the top of the standings. Minnesota, with its grind-it-out style and stubborn consistency, will probably capture the final playoff spot, but don’t count out any of the old Pacific division franchises, either.

Arizona is considered the best of the bunch, but it lost some of what little offensive firepower it had in the offseason and relied too heavily on goaltending in the first place. Los Angeles specifically could surprise and doesn’t deserve to be priced so far behind Anaheim and San Jose, considering its expected goals numbers were better than its record last season.