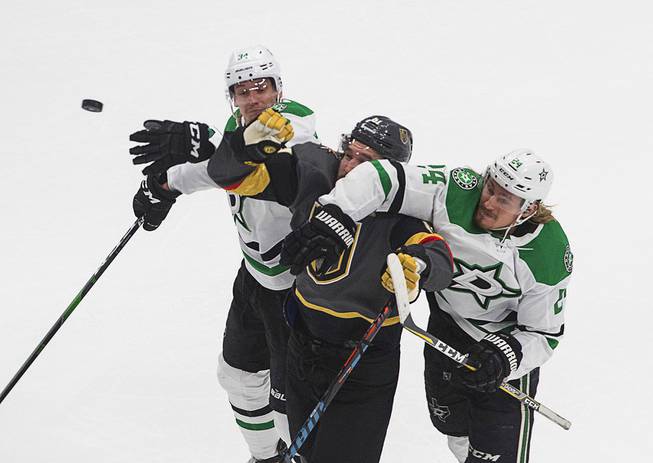 Golden Knights’ Mark Stone is sandwiched between a pair of Dallas Stars during the Western Conference Finals, Sept. 8, 2020, in Edmonton, Alberta.

The hockey gods might work in mysterious ways, but they’re usually fair in the long run. Luck for NHL teams often evens out.

The shifting systemic fortunes of the Vegas Golden Knights over the past six months serves as proof. The bubble format the NHL installed to go forward with its playoffs and finish last season benefited the Golden Knights in a number of ways. The five-month pause in action from March to August allowed Vegas to have its best player, forward Mark Stone, healthy for the playoffs, which otherwise wouldn’t have happened. The setup also permitted the Golden Knights to snag a No. 1 seed in the Western Conference playoffs that they didn’t truly earn.

Instead of paying a penalty for struggles that lasted more than half the season—and saw them fire their coach in early January—the Golden Knights were gifted with a reprieve. Three wins in glorified exhibition games in a round-robin tournament gave them an all-time breeze of a path to the Western Conference Finals.

Once there, the Golden Knights squandered an, ahem, golden opportunity to get back to the Stanley Cup Final with an offensive outage against the Dallas Stars. It wasn’t a devastating loss based on suspense—Dallas won quickly in five games—but it was in terms of situation.

Forces may never align so perfectly in Vegas’ favor ever again. They certainly aren’t at the outset of this most unique 2021 season.

Gone are the snow-soft confines of the Pacific Division, where the Golden Knights could slump for the majority of the season and still get hot enough to hang a regular-season championship banner with a relatively low point total. It is a West Division that’s more akin to a World Cup Group of Death assignment.

There’s arguably no set of three teams in any of the other three divisions as daunting as Colorado, St. Louis and Vegas. If one or two of the other West franchises—Anaheim, Arizona, Los Angeles, Minnesota and San Jose—turns into a surprise contender, the division will probably edge the Central and East as the NHL’s toughest overall.

With the 56-game regular season consisting entirely of divisional games, this isn’t going to be easy for Vegas. The Golden Knights are still a championship contender. They have too much talent not to be considered that, especially after locking up trade-deadline prize Robin Lehner long term in net and pulling off a free-agent feat in signing Alex Pietrangelo.

But the margin for error has greatly diminished. And local betting odds concur.

A runaway favorite to win the Western Conference going into last season, the Golden Knights aren’t even a favorite to win their own division this year. Circa Sports lists the Avalanche at the lowest odds of +125 (risking $1 to win $1.25), with the Golden Knights close behind at +170. Vegas is tied for second in Stanley Cup odds with defending champion Tampa Bay at 7-to-1, behind the Avalanche at +580.

Pietrangelo is a difference-maker and immediately rivals Stone as the Golden Knights’ most valuable veteran—rising 25-year-old Shea Theodore might also belong in the conversation—but is another two-way defenseman what the Golden Knights were missing most? Most fans would have probably voted for a volume-scoring forward in the wake of the Dallas series, in which Vegas struggled to find the net.

Instead, Vegas’ forward depth—especially at center—looks a little short of championship caliber. That could change if the Golden Knights’ younger depth pieces are up to the task: if Chandler Stephenson builds on a career year after coming to Vegas via trade, if Alex Tuch can sustain the flashes of occasional brilliance he’s shown the last two seasons, and if Cody Glass can start to realize his potential.

The goalie situation also appears hazardous, with Lehner and Marc-André Fleury set to jockey for time in the crease. It’s a waste of resources to allot $12 million in cap space to two netminders, no matter how much the front office tries to pass it off as an advantage, or how warm and fuzzy it might be to have the beloved Fleury around for a fourth season.

Multiple reports indicate general manager Kelly McCrimmon and his team tried to trade the 36-year-old Fleury during the shortened offseason but were rebuffed because of the two years and $14 million left on his contract.

That’s more poor planning than bad luck, but overall, it’s the latter conspiring against the Golden Knights most this season. They’re still one of the best teams in hockey, but there’s no disputing that their championship chances aren’t what they were going into last season. They’re not what they were going into the bubble. And they’re not what they’d be if this season were being played under normal circumstances.

Still, Vegas’ fate remains in its own hands. It’s up to the Golden Knights to overachieve.