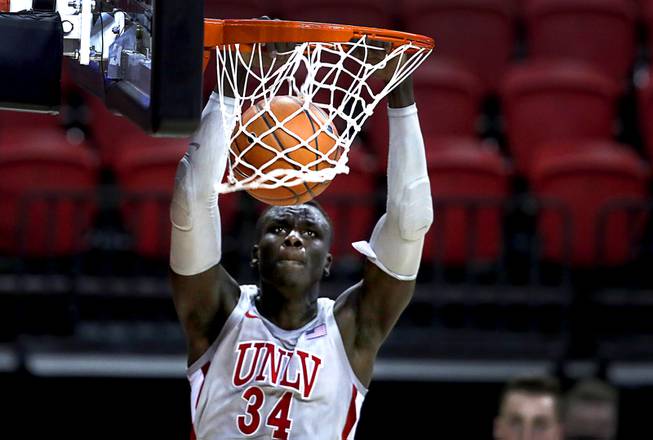 UNLV Rebels forward Cheikh Mbacke Diong (34) dunks in the first half of a game against the Fresno State Bulldogs at the Thomas & Mack Center Friday, Feb. 26, 2021.

On Wednesday, Fresno State guard Deon Stroud threw down a 360-degree breakaway dunk that turned momentum in the Bulldogs’ favor and launched their comeback in an eventual 67-64 win.

UNLV trailed by as many as 16 points in the first half and was down 40-32 when Diong, a 6-foot-11 center, came up with a steal on the opening possession of the second half and raced the length of the court before powering home a one-handed dunk over the outstretched arm of his Fresno State counterpart Orlando Robinson.

Diong’s authoritative slam spurred an 8-3 run to open the half, and less than six minutes later the scarlet and gray took their first lead since the early minutes.

UNLV had to sweat out a potential game-winning shot from Junior Ballard at the buzzer, but when he missed from the right wing as time expired it clinched an improbable 68-67 win.

“Mbacke had a big steal and dunk to get us going to start the second half,” Grill said. “I think that’s what really led us to victory was that momentum swing right there.”

Diong finished with eight points, six rebounds, four assists, three blocks and the one steal. He also carried UNLV on the defensive end, as T.J. Otzelberger switched him onto Robinson, Fresno State’s best player, late in the first half.

Robinson scored 11 points on 4-of-6 shooting in the first half; after the break Diong held him to four points on 2-of-8 shooting, and Robinson committed three turnovers.

Bryce Hamilton scored back-to-back driving baskets to put UNLV ahead, 64-63, with four minutes left, and David Jenkins hit two free throws and then banked in a floater to make it 68-65 with two minutes to play.

Fresno State trimmed the lead to a single point on a pair of Deon Stroud free throws with 39 seconds left, and the scarlet and gray came up empty on the final possession as Jenkins missed a contested jumper.

Though Fresno had two timeouts remaining, coach Justin Hutson chose not to call one. The Bulldogs advanced the ball hastily and rushed through a couple passes before Ballard missed a long 3 as the horn sounded.

It was a nice bounceback win for UNLV, which lost in dreary fashion on Wednesday. The scarlet and gray are now 11-12 on the season and 8-8 in the Mountain West, with two makeup games to be played next week.

Otzelberger wants his team to bottle up the verve provided by Diong’s dunk and carry it over to their remaining games.

“Coming out in that second half we talked about energy, enthusiasm and passion, and Mbacke’s steal and dunk really got us going,” Otzelberger said. “Hopefully that’s something we can continue to build on as we move forward.”