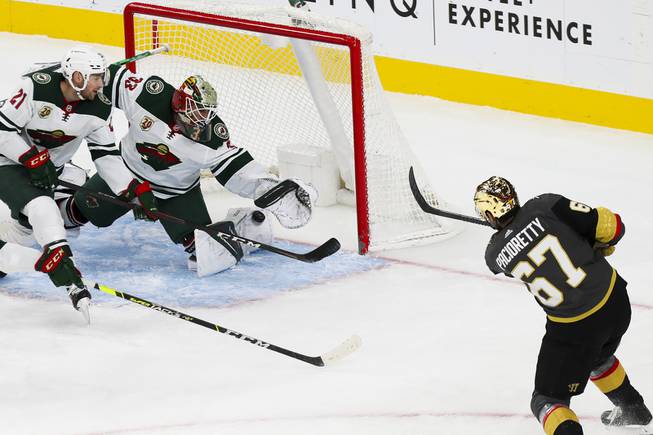 The Golden Knights looked lifeless for much of the third period. Turns out they were just conserving their strength.

The Golden Knights scored twice in the third to tie the game, then finished the comeback in overtime to beat the Minnesota Wild 5-4 at T-Mobile Arena on Monday.

Mark Stone assisted on all five goals for Vegas, the first five-assist game of his career, and Max Pacioretty scored twice, including the overtime winner.

Down 4-2 entering the third period, the Golden Knights had trouble ramping up a comeback. Vegas didn’t record a shot on goal until more than 11 minutes into it, and spent a lot of time in its own zone. The Golden Knights shifted its lines to return to the traditional top-six, and even rolled five defensemen to generate offense, but nothing was working for almost 13 minutes.

Then with 7:20 to go in the third, Nicolas Hague wound up and blasted one from the point to bring the Golden Knights within a goal. Vegas won an offensive-zone draw and Stone put it on a tee for Hague to rip it high and near-side for his second of the season.

That was Stone’s third, and the fourth came in the final minute. With 41.6 seconds remaining and with the Golden Knights’ net empty, Stone found Alex Tuch, who buried the game-tying goal to force overtime.

The second period was when the game picked up. Cody Glass opened the scoring with a power-play deflection, followed by a pair of Minnesota goals. Max Pacioretty scored another power-play goal for Vegas, but the Wild answered with two more. Stone assisted on both for the Golden Knights.

Marcus Foligno scored twice for the Wild in the second, and Jordan Greenway and Nick Bonino each scored. Vegas and Minnesota combined for three goals in under three minutes, then later in the period Minnesota scored twice in 19 seconds.

Vegas finished with a 38-30 edge in shots on goal.

The first period may not have had much action, but the second period more than made up for it.

The Golden Knights and Minnesota Wild combined for six goals in the frame, including a pair of power-play tallies for Vegas. Those were their only goals though, and trailed the Wild 4-2 through 40 minutes.

The Golden Knights received their second power-play of the game early in the second period and capitalized, even if they had to have one waved off first. Cody Glass made sure the second one counted, redirecting a Mark Stone feed and putting Vegas up 1-0 at 7:09.

The lead didn’t last long, and within two minutes Minnesota tied it. The first shot appeared to fool Marc-Andre Fleury, who looked like he was going to reach down and freeze the puck. Instead the rebound kicked out to Jordan Greenway, who buried it to tie the game at 8:51.

Just over a minute later, the Wild grabbed their first lead of the game. Marcus Foligno positioned himself just outside the crease to Fleury’s left, and was in the perfect spot to deflect a Jonas Brodin attempt into the net at 9:57.

After going more than 27 minutes without a goal, Vegas and Minnesota combined for three goals in under three minutes. But even that wasn’t enough. The period still had another lead change in store.

The Golden Knights connected on another power-play goal at 13:41 of the second, courtesy of Max Pacioretty’s team-best ninth of the season. A few seconds earlier he had a chance to shoot but went for the back-door pass attempt that deflected wide. When he got another look he fired right away, bouncing off goalie Cam Talbot’s pad and in.

And one more time the Wild answered a power-play goal with two of their own. First up was Nick Bonino on a rebound, then came Foligno’s second of the period on a 2-on-1. The goals came 19 seconds apart, and finished a bonkers period of hockey.

Vegas and Minnesota each had 27 shots on goal through two periods.

The Golden Knights welcomed back about 2,600 fans to Monday’s game against the Minnesota Wild. Through the first period, they didn’t get the chance to stand and cheer they had hoped for.

Vegas and Minnesota each had their looks in the first but nothing overly dangerous, and they went into the first intermission in a 0-0 tie at T-Mobile Arena.

The Golden Knights spent much of the first few minutes living in the offensive zone, but couldn’t turn it into shots on goal. Though the Wild had the puck less they shot more, and at the second TV timeout just past the midpoint in the period led in the shot counter 7-4, though Cody Glass did hit the crossbar seconds earlier.

Vegas had the first power-play of the game when Minnesota’s Matt Dumba was called for holding the stick, but it not generate much.

The Golden Knights played their first 11 games this season at T-Mobile Arena with no one in the building except the players, media and a skeleton crew of game-day staff. Vegas will welcome about 2,600 fans to today’s 7 p.m. game against the Minnesota Wild and even though the arena won’t be full, the Golden Knights can’t wait to hear real cheers again.

“There was a big, big buzz around the group this morning — the team, the dressing room, on the ice — about the fact that we’re going to have fans there,” Vegas coach Pete DeBoer said. “Even with the number we’re going to have tonight, it’s going to be a huge boost compared to playing in the empty rink.”

Tickets for the games aren’t cheap. They were first offered to season-ticket holders last week before going on sale to the general public a day later. If you didn’t scoop up tickets then, it will cost a pretty penny to get in now. The cheapest tickets about noon today were $195 per seat before taxes and fees, and they came in a block of four.

Fans that do make it to the arena will be treated to a battle for first place in the West Division. The Golden Knights lead the pack entering play today with 25 points, but the Wild are right behind at 24 points after a six-game win streak.

It’s a new-look Wild squad, building on its trademark defensive prowess with strong goaltending and a division-best 3.17 goals per game. Vegas is 2-4-0 all-time against the Wild, tied for the worst points percentage against any opponent.

“Their game is real,” DeBoer said. “This is a really dangerous team. This is definitely going to be, for me, one of the four teams standing come playoff time. It’s a great test for us.”

The Golden Knights will get their first look at Calder Trophy front-runner Kirill Kaprisov, the 23-year-old dynamo who came from Russia last year and has not disappointed in his rookie year. He leads the Wild with 17 points, a number which tied Mark Stone for the most of any player in tonight’s game.

Vegas will run out a similar lineup as the past two games, with the exception of welcoming Tomas Nosek back to action. The forward returned a positive test for COVID-19 on Feb. 9 and has not played since.

It’s not an easy game to return to, with first place on the line. But after nearly three weeks recovering from the virus, Nosek is just happy to be back playing hockey.

“It’s been a tough start for sure after COVID, but I’ve been skating for more than a week, so I think I’m back in it and feeling pretty good right now,” Nosek said. “It will be a tough game, but if we stick with our game, hopefully we’ll get a win for the fans in the building.”