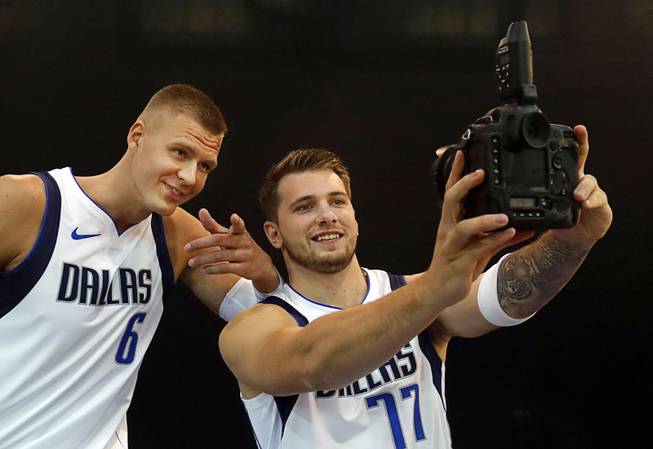 Dallas Mavericks Luka Doncic (77) of Slovenia and teammate Kristaps Porzingis of Latvia make a photo of themselves during an NBA basketball media day in Dallas, Monday, Sept. 30, 2019.

No one wants to be involved in the NBA All-Star Game, not even the players, so I’m following their lead.

Even though All-star weekend is one of the biggest events on the sports calendar this week, I won’t be betting it — at least not in the weekend wagers column. Boyd Gaming’s BConnected sports app did it make it tempting, though.

It’s the first book locally to post odds of all the annual festivities from the slam dunk contest (Cassius Stanley is a -155 favorite despite the fact that I’m relatively sure he hasn’t played in a real basketball game since leaving Duke) to the actual game (the over/under is set at 308.5). Check out all the Boyd odds if you’ve got a hankering to gamble on the All-Star game, but luckily, there’s plenty else to bet where the participants will actually care about the result.

Read this week’s weekend wagering guide below. Records are attached individually by sport, with the cumulative at the bottom of the page. The monetary figure is calculated by the assumption of a bettor placing a $100 wager on each pick. Any picks outside of the column will be linked and included in the record total. Odds are the best currently available in Las Vegas at publication time.

Hovland is playing as well as anyone in the world. He’s done everything except win since the PGA Tour returned for its 2021 schedule. So why bet against him? Because everyone knows how well he’s played and it’s inflating his prices. He should be a favorite against Casey in a single-round matchup, sure. But not this big of a favorite. Casey is incredibly solid and arguably more consistent than Hovland. The veteran Englishman is also playing at a high level, having won a European Tour event with a strong field in Dubai just more than a month ago. Hovland beat Casey by a stroke on Friday, but that’s only because he holed out from the bunker late in the round to prolong a birdie streak. He’s not going to keep getting breaks like that. Maybe Saturday is when Hovland cools off, and even if it’s not, Casey is still good enough to beat him.

It’s back to fading the Blue Jackets, one of my favorite recurring strategies this hockey season. Columbus continues to get too much respect from the market, which is pricing it somewhere in the mid-tier of the league. The truth is, the Blue Jackets belong much lower. They’re 27th in expected goal percentage on 5-on-5 and, to no surprise, were outplayed by one expected goal in the front end of this set against Dallas despite winning 3-2 on Thursday. The Stars should at least salvage a split with my price on this game closer to -150, leaving a decent amount of value on the home team.

Bantamweight championship fighter Cody Garbrandt absorbs another blow from Dominick Cruz during their UFC 207 fight at the T-Mobile Arena on Friday, Dec. 30, 2016.

The former bantamweight champion and current ESPN commentator deserves more respect from the betting market. Cruz may not have the speed that made him one of the best pound-for-pound fighters a decade ago, but he’s got the smarts to outmaneuver all but the division’s absolute best. Kenney is a little short of that. Cruz should be able to stick, move and outpoint Kenney in a vintage performance. He’ll also employ his wrestling liberally, making it hard to imagine he’ll put himself many positions where he could be finished. A close decision feels inevitable and, in that case, the reading of the scores could be excruciating for anyone who bets this fight. Maybe it will go the other way and Kenney will get the nod but the line is off. Cruz should be the slight favorite, not Kenney.

There are so many betting options with the local NASCAR weekend that I felt it necessary to eschew the traditional matchup and future odds for a more unique approach. Truex is a good bet in any department, though. I’d make him the favorite for Sunday’s Cup race even though he’s currently the second choice, behind Kevin Harvick, or even third, also trailing back-to-back Pennzoil 400 winner Joey Logano, at some sports books. Truex had incredible speed last week at Homestead-Miami and finished in second behind William Byron. He cleans up at these type of intermediate tracks and shouldn’t be available at plus money for a top-five finish.

It’s no All-Star game, but I couldn’t quit the NBA entirely. This might not be the most attractive-looking midseason price, but it’s the best value on the board as far as futures. The Mavericks have endured a nightmare first half and still sit only a game out of the divisional lead. They’ve been rocked by COVID-19 outbreaks and injuries, both of which are now clearing up to help them win five of their last six. Luka Doncic has undergone the traditional superstar “play yourself into shape” route and now that he’s gotten there, he’s regained the form that made him the preseason MVP favorite. San Antonio, Memphis and New Orleans all have their merits but they’re a far bit behind Dallas and the standings will ultimately reflect it.