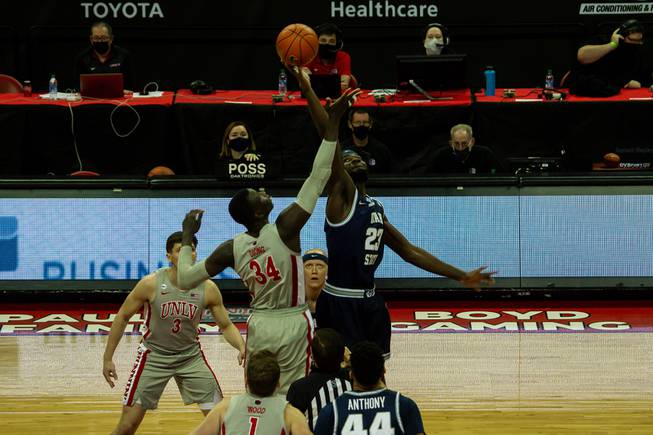 The Mountain West announced its postseason awards on the eve of the conference tournament, and, as expected, UNLV players were shut out of the major categories.

UNLV guard Bryce Hamilton made the first team last year as a sophomore and was a preseason pick for the first team in 2020-21, but after averaging 17.3 points per game in conference play on just 41.0-percent shooting this year he was relegated to the second team.

UNLV guard David Jenkins was the preseason Newcomer of the Year, but the South Dakota State transfer was beaten out by Sherfield for the honor on Tuesday. Jenkins did earn a nod on the All-MWC third team after posting 15.0 points in league play.

UNLV center Mbacke Diong landed on the All-Defense first team by virtue of averaging 7.7 rebounds, 1.1 blocks and 1.5 steals per game.

The Mountain West coaches vote on the league’s official awards, while the media conducts its own separate poll. Hamilton also made the second team via the media vote, released on Monday, while Jenkins was not selected to any of the three All-MWC teams.

The media and coaches differed greatly on the Player of the Year, as the media overwhelmingly chose Queta by an 8 to 1 margin over Mitchell (Roddy received two media votes for POY).

There was a split on Coach of the Year as well, as the coaches selected San Diego State’s Brian Dutcher while the media opted for Colorado State’s Niko Medved. Both named Wyoming guard Marcus Williams the Freshman of the Year.