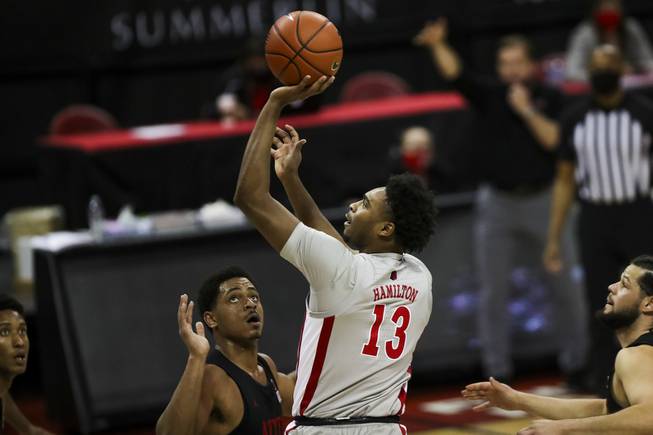 For UNLV, it has all come down to this week.

The season started with so much promise — all-conference players, a strong nonconference schedule and dreams of an NCAA Tournament bid — but after posting an 11-14 record (8-10 in the Mountain West), UNLV is now in a position where they will only play as long as they keep winning.

That gauntlet begins today, when the No. 7-seeded scarlet and gray take on No. 10 Air Force in the play-in round of the Mountain West tournament (1:30 p.m., Mountain West Network).

Air Force is one of the few teams UNLV handled this season, as T.J. Otzelberger led his team to a two-game sweep of the Falcons in February.

Can UNLV win again and keep its season alive? Three keys to watch:

UNLV has allowed opponents to make 9.0 3-pointers per game, which ranks 329th in the nation. It has been a weakness all season, and though Air Force is not a bombs-away offense by nature (7.2 3-pointers per game, 182nd in the nation) the Falcons do have some players who can hurt UNLV if the defense slacks around the arc, including guard A.J. Walker, Christopher Joyce and Glen McClintock.

Otzelberger said 3-point defense is not just a matter of putting a hand up on shooters, but anticipating the play as it’s unfolding.

In UNLV’s 80-69 loss to Wyoming in the regular-season finale, the Cowboys used a 15-2 run in the second half to blow the game open. UNLV never recovered.

It was far from the first time this season that the scarlet and gray have allowed an opponent to seize control of a contest via an extended run of dominance, and Otzelberger thinks it’s a maturity issue.

“I thought we’ve had two good practices, but now it’s demanding that those habits come out during the game,” Otzelberger said. “We show them in stretches, but we play with immaturity a lot of times. It’s not through the balance of the game. We’re [not] usually getting blown out. It’s more of a, ‘Hey, the game’s pretty tight and now they go on a 10-0 run and separate and we’re not able to come back. I believe our guys will come out tomorrow and play hard. They better.”

Get the ball inside

Air Force is a severely undersized team, with no true center or power forward on the roster. Because of that, opponents make 73.0% of their shots around the rim against the Falcons, which ranks AFA dead last in all of Division I basketball. Even a perimeter-oriented team like UNLV should be able to take advantage of that by working the ball inside and converting easy baskets.

That means UNLV’s top offensive threats — junior guards Bryce Hamilton and David Jenkins — have to put in extra effort to get all the way to the hoop and not settle for their preferred mid-range jumpers.

Shot selection has been a huge weakness for UNLV throughout the season, and the reliance on mid-range attempts has been one of the key issues. With the season on the line, Hamilton and Jenkins cannot take the easy way out.