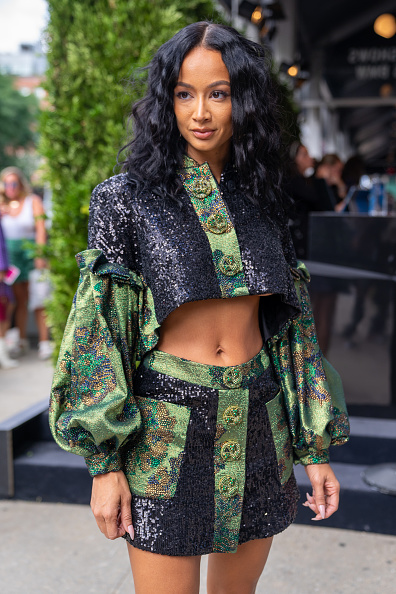 The model and actress treated fans to a show on the Gram.

When it comes to delivering consistently sultry photos on Instagram, Draya Michele is always someone you can count on. While her looks and persona are enough to earn her public acclaim, her time in the spotlight has not been without controversy. Most recently and notably, the 36-year-old reality star lost her Savage x Fenty sponsorship after making a poorly executed joke regarding Megan thee Stallion and Tory Lanez‘s relationship. She has apologized profusely for the remarks and hasn’t been involved in any other high-scrutiny scandals since. Amping up for a big career jump this year, the model took some time to share some scandalous shots.

In the photos, Draya flaunted her stunning figure in a skintight, sheer, caramel-colored patterned top. Appearing braless, she paired the bold fit with an extremely high slit miniskirt in a pale-white shade.

She added strappy tan heels and a matching Louis Vuitton bag. Giving a fierce strut in the respective photoset, she styled her hair in protective dreads and stunner shades. Scroll through the alluring photos below.

“It didn’t need 4 slides but consider it a bonus or whatever,” she wrote, referencing the gallery view she had offered fans of the sexy look.

The photos arrive as the reality TV alum has been spotted out shooting her 10-part docu-series “Doses of Draya.” Despite losing her lucrative deal with Rihanna‘s best-selling lingerie line, she seems to be doing pretty well in other departments. She released a collab with popular brand Oh Polly in 2020 and landed herself her own Doses of Draya docu-series after appearing on Basketball Wives LA.

Speaking on the venture, she explained, “As a woman of color, I couldn’t be more excited to be working with Zeus, a Black-owned streaming service, to share my story, and to let people into my daily life in a way I never really have before.”