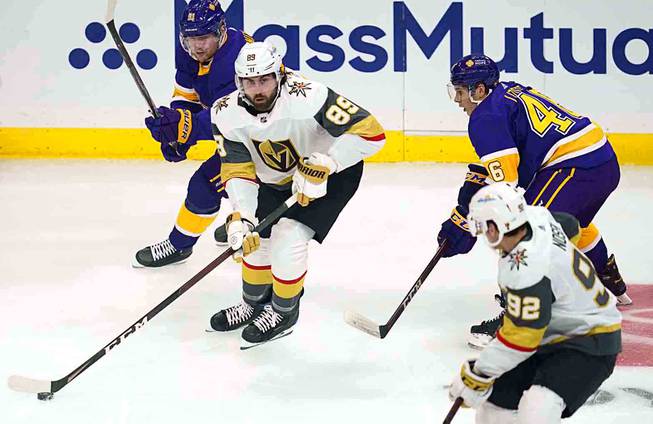 The Golden Knights have used nine players and 10 combinations trying to find the magic mixture for the third line. After a trade deadline acquisition, they’re hoping that adding a 10th player to make an 11th blend is the one that clicks.

Mattias Janmark arrived from Chicago to be the left wing on the third line alongside Tomas Nosek and Alex Tuch. Nosek scored the first goal, Janmark assisted Tuch on the second and the trio was dominant in a 6-2 victory over the Los Angeles Kings at Staples Center.

“I think we had pretty good chemistry for the first game,” Nosek said. “Hopefully we can keep that going and be good every game.”

On their first four shifts of the game, Janmark, Nosek and Tuch scored twice and drew a penalty. The Kings had no answer, and while those three were on the ice the Golden Knights had nine scoring chances to Los Angeles’ three, including a 5-1 edge in high-danger scoring chances until a few chances at the end of the game tilted the scales, according to Natural Stat Trick.

They connected on two of those chances they generated, setting the offensive tone for the game.

Nosek continued his weeks-long hot streak by showing off a sniper side we’ve rarely seen. He entered the zone on the right side with speed and instead of pulling up for a pass, pulled the puck to his skates and ripped it over Jonathan Quick’s glove to match a career-high with eight goals on the season. Nosek has 16 points in his last 19 games.

Janmark was on the ice for that goal, already making him a plus-1 three shifts into his Vegas career but that wasn’t enough of a splashy debut. Four minutes after Nosek’s goal he added an assist too, feeding Tuch’s entry and setting up a wrister to put Vegas up 2-0.

Until they’re on the ice together, any predictions of how players will do together are just that. It seemed like Janmark’s speed and scoring ability would play well with Tuch and Nosek’s reliable defensive play as well as his stellar offensive campaign.

“When you write names down on paper, you never know how that’s going to translate,” coach Pete DeBoer said. “I really liked how that felt tonight. I hope that it becomes a long-term thing for us, but it felt really good.”

Once Janmark, Nosek and Tuch were done, the rest of the team took over, including Max Pacioretty with a goal and two assists. The assists were prettier than the goal, considering he scored on a back-handed dump-in from the blue line that took an odd hop around Quick.

That chased Quick from the game as Cal Petersen entered to replace him, closing the book on a rough season against Vegas. In four games this season, the Golden Knights tagged Quick for four goals three times and the three goals on Wednesday. He was pulled twice.

“It’s a terrible break for him,” Pacioretty said of his goal against Quick, his former Team USA teammate. “There’s nothing you can do. The ice was really bad and it just got the craziest bounce you could ever imagine. It’s very lucky but at the same time you feel for (Quick).”

His first assist had more finesse to it, bumping a Zach Whitecloud clearing pass over to Chandler Stephenson to set up a breakaway. A game after missing two breakaway chances, Stephenson didn’t miss this one, going five-hole on Petersen and extending Vegas’ lead to 4-1.

His second assist set up Stone to make it 5-2. It’s the second game in a row Stone, Pacioretty and Tuch all scored.

Alex Pietrangelo added one more for the Golden Knights with 9:07 to play, a faceoff set play that went off Los Angeles’ Brendan Lemieux and floated over Petersen and into the goal.

Trevor Moore had both of Los Angeles’ goals — one in the first period to make it 2-1 and the other in the second to make it 4-2.

Vegas finished with a 32-22 lead in shots on goal.

Twenty of those Kings shots were saves by Marc-Andre Fleury, who moved into sole possession of fourth place on the NHL’s all-time wins list with 485 by passing Ed Belfour. He said he’s not yet ready to look at the historic nature of the win, but instead wants to continue to climb. He’s four away from tying Roberto Luongo for third.

“I feel like since I’m still playing, I always want to get a little more,” Fleury said. “Looking back and being able to be here now and having passed (Belfour), he’s a guy who I really loved watching and I have a lot of respect for. It’s pretty cool and I’m very humbled by it.”

Moses Wood is 10th UNLV player in the transfer portal