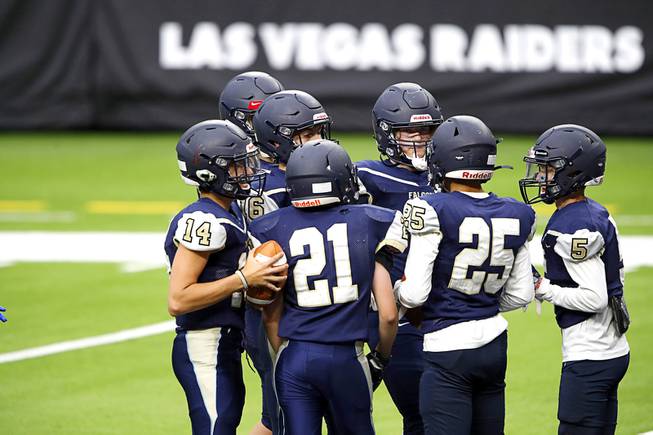 Members of the Centennial High football team patiently waited in the tunnel that leads onto the field at Allegiant Stadium.

Ever since they learned a few weeks ago that the program was pegged to conduct a practice at the Raiders’ home stadium, many players envisioned how the once-in-a-lifetime opportunity would look and feel.

Standing there, it hit them.

NFL legends Tom Brady and Drew Brees waited in the same tunnel a few months ago to play at Allegiant. Patrick Mahomes scored a touchdown in the end zone a few feet in front of them. Same with the Raiders’ Josh Jacobs.

“It’s crazy to be walking in on the same sideline as Pro Bowlers and Hall of Famers,” Centennial junior Brayden Iverson said.

Centennial is one of nine Clark County School District football programs invited by the Raiders to conclude their spring practice this week with a scrimmage at Allegiant. After having the fall season shelved because of the pandemic, the Raiders’ gesture certainly gave the players a sense of normalcy they desperately missed during the pandemic.

After all, the kids got to play football with their best friends in an NFL stadium — they even recorded walking onto the field on their phones.

All of the about 60 players Foothill dressed saw some significant action in the scrimmage, including many sophomores and freshmen.

“The kids were kind of in awe,” said Vernon Brown, the Foothill coach. “It was funny because once we got going, they were so pumped up that they started getting tired. At the end of the day, it’s just football, whether it is at Foothill High School or Allegiant Stadium. Once they saw the cameras and the lights, they were ready to go.”

The Raiders have had a consistent presence with local programs since the franchise announced its intention to relocate to Las Vegas in 2017.

Myles Hayes, the franchise’s director of youth football, has coordinated donations, coach of the week awards, and during the pandemic, video meetings with players. A few Raiders players, for instance, virtually met with the Centennial running backs. And earlier this month the Raiders and UNLV coaching staff partnered to host a coaches clinic for about 70 local high school coaches.

But nothing can top opening the doors to Allegiant. It was the first — and definitely not the last — high school event at the $2 billion stadium.

Each team got to use the field for two hours. It was two hours when the pandemic, for one of the first times in more than a year, seemed like an afterthought.

“The kids were excited about this all week. The kids appreciate everything the Raiders have done for us,” Brown said.