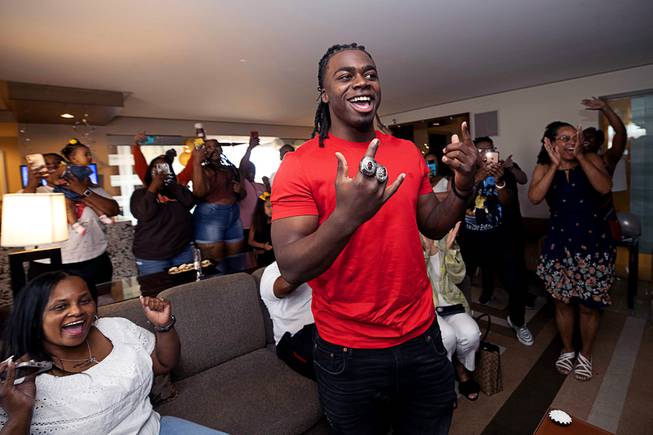 Running back Rhamondre Stevenson, a Centennial High School graduate and Las Vegas Sun player of the Year in 2015, reacts with family and friends in a suite at Aria, as he is drafted by the New England Patriots in the fourth round Saturday, May 1, 2021. His mother Juran Stevenson is at left.

Desert Pines High graduate Tony Fields had been talking about getting taken in the NFL Draft since he was a scrawny 5-foot-4 middle-schooler.

His confidence was rewarded Saturday morning when the Cleveland Browns selected the West Virginia/Arizona linebacker with the 153rd overall pick in the draft, the ninth choice in the fifth round. Fields is still considered undersized at 6-foot, 222 pounds, which might have been the only reason he didn’t go sooner.

Fields was a four-year starter in college and saved his best season for last when he transferred to West Virginia. He won the Big 12 Newcomer of the Year award as a sure tackler and hard hitter.

He finished off his local career in storybook fashion, helping the Jaguars win the 2015 3A state championship, and saw another dream come true Saturday. With the draft being held in Cleveland this year, Fields was one of the rare day-three selections who got a loud reaction from the crowd when his name was announced.

Texans stop Brevin Jordan’s slide down the draft board

The Houston Texans may have gotten a steal in local tight end Brevin Jordan.

The former Bishop Gorman star and top tight-end recruit in the country in 2018 was graded as highly as a second-round pick, but slipped to the early fifth round before the Texans chose him. Houston picked Jordan, who played collegiately at Miami, with the third pick of the fifth round, 147th overall.

The rumors for the cause of Jordan’s draft-drop range from his continued recovery from a shoulder injury he suffered last season to subpar meetings with teams via Zoom Calls. The decline certainly doesn’t have anything to do with his production on the field.

Jordan lived up to the hype with the Hurricanes, especially this past year when he posted career-highs with 38 receptions for 576 yards and seven touchdowns. The Texans’ roster is without any established threats at tight end, so Jordan could earn playing time and make an impact immediately.

Rhamondre Stevenson goes to the Patriots

Former Centennial star Rhamondre Stevenson didn’t have the profile of Jordan coming out of high school, but he kept working towards a dream that culminated Saturday morning when he was picked in the NFL Draft.

The New England Patriots selected Stevenson with the 15th pick of the fourth round, 120th overall. The 6-foot, 245-pound running back out of Oklahoma is known as a bruising runner explosive in the opening field, traits he’s shown all the way back to his days with the Bulldogs.

Stevenson’s most notable high school moment might have come in 2015 when he had an 85-yard touchdown against eventual national champions Bishop Gorman, which otherwise hardly gave up any points to local opponents all season.

Despite the highlight, he was initially lightly-recruited and headed to junior college at Cerritos College in Norwalk, Calif. out of high school before eventually signing with the Sooners. He shined in two years with Oklahoma, racking up 165 carries for 1,180 yards and 13 touchdowns.

He’ll join a new generation of offensive players with the Patriots after the organization used their first-round pick on Alabama quarterback Mac Jones on Thursday.