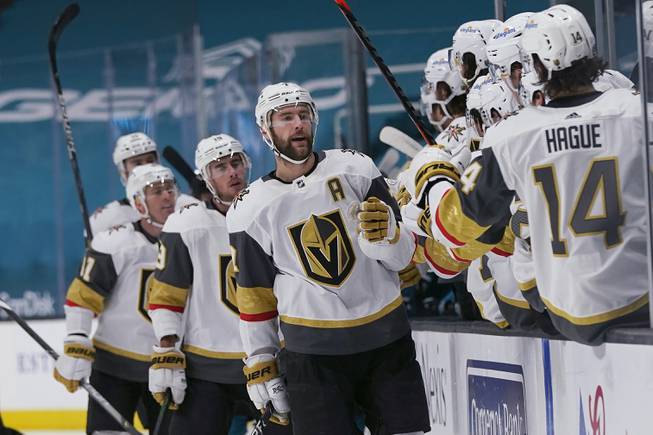 Vegas Golden Knights defenseman Alex Pietrangelo, middle, is congratulated by teammates after scoring against the San Jose Sharks during the first period of an NHL hockey game in San Jose, Calif., Wednesday, May 12, 2021. (AP Photo/Jeff Chiu)

The Golden Knights’ regular season is over and they are guaranteed a top-two record in the NHL. Whether they finish with the Presidents’ Trophy for the best record in the league or in second place of the West Division is entirely out of their control.

Vegas did what it needed to Wednesday night, obliterating the Sharks 6-0 in the season finale at SAP Center. The Golden Knights are locked in a race for the division with the Colorado Avalanche, who also won Wednesday, bringing the division down to Colorado’s final game of the season.

If the Avalanche lose to the Kings on Thursday, the Golden Knights win the division and the Presidents’ Trophy, guaranteeing them home ice throughout the playoffs. If the Avalanche win, they claim those titles. Colorado holds the tiebreaker based on regulation wins this season.

“We won 40 games of 56 we played, so I thought I we played right from Game 1 to the final buzzer of Game 56 and threw our best record on the board,” Vegas coach Pete DeBoer said. “Hopefully it’s enough for first. If it isn’t then I’m still really happy with the regular season we had.”

Tonight’s game was produced no drama because the Sharks were eliminated from playoff contention on May 3 and had to wait three days since their last game for Wednesday’s contest as a result of COVID-related postponements.

Maybe there was an idea they would relish the chance to keep their rival from a top seed in the West, but that idea evaporated quickly. Vegas dominated San Jose from the jump, firing 12 of the first 13 shots on goal and picking up goals from Alex Pietrangelo and Keegan Kolesar to lead 2-0 after a period.

That didn’t slow down in the second either, where William Carrier scored to make it 3-0 and barely reacted, having clearly seen the score in Colorado during intermission, and Jonathan Marchessault added another later in the period. Dylan Sikura netted two in the third period, the second and third goals of his career and first with the Golden Knights.

“I’ve struggled putting the puck in the net at this level so it was nice to get those by him and hopefully get some more moving forward here,” Sikura said.

Vegas goalie Marc-Andre Fleury made 17 saves to pick up his sixth shutout of the season and secure some hardware. By not allowing a goal, he and Robin Lehner led the Golden Knights to a league-low 124 goals allowed in the season, securing the Jennings Trophy for the pair.

Lehner won the award with Thomas Greiss and the Islanders in 2019, and Fleury has never won it.

“For me, hands down the best goalie tandem in the league,” DeBoer said. “I like to think that trophy, and I’m sure they would say this, is a team defense trophy, and I think they got some good help from our commitment to defending. But those two were outstanding every night for us.”

It was a strong finish to the season for the Golden Knights but unfortunately for them, the Avalanche beat up on a lifeless opponent as well. The Avalanche seized control of the West Division with a victory at T-Mobile Arena on Monday, allowing themselves to control their own fate. All they had to do was win two games against the Kings, who like the Sharks have been long-eliminated and had no reason to play.

That will be the case Thursday too in both teams’ season-finales. And all the Golden Knights can do is watch, and hope the Kings can pull off an upset that would hand a division crown to Vegas.

“Hopefully we get a little lucky and have a big game from LA and finish first,” Marchessault said. “But if not, I thought our season was good overall and despite who we face in the first round, I think our team is ready to play come playoffs.”