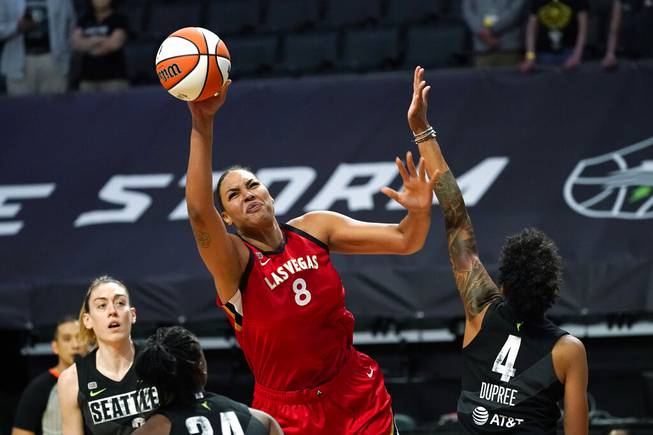 Las Vegas Aces’ Liz Cambage (8) tries to get a shot off as Seattle Storm’s Candice Dupree (4) defends in the first half of a WNBA basketball game Saturday, May 15, 2021, in Everett, Wash.

EVERETT, Wash. — Breanna Stewart had 28 points and 13 rebounds, Jewell Loyd added 22 points and the Seattle Storm opened defense of their WNBA title with a 97-83 victory over the Las Vegas Aces on Saturday.

The rematch of last year’s WNBA Finals in the Florida bubble was a celebration for the Storm complete with a ring ceremony and championship banner unveiling as Seattle tries to become the first team to repeat as WNBA champs since Los Angeles in 2001 and 2002.

Even with an overhauled roster, Seattle looked the part of a championship contender in the opener. Seattle trailed by as many as nine in the opening quarter, but outscored Las Vegas 45-31 in the middle two quarters to take control.

A’ja Wilson, last year’s league MVP, led Las Vegas with 24 points and Liz Cambage added 16 in her return to the WNBA after sitting out last season.

The Aces reached last year’s finals on the strength Wilson’s season. But the return of Cambage is a big reason why Las Vegas was the preseason favorite in poll of league general manager and held the No. 1 spot in the first AP WNBA power poll.

Seattle received a scare when Bird limped off the court favoring her left leg with 6½ minutes left after a collision with Cambage. Bird immediately jogged into the tunnel underneath the stands and could be seen testing out the leg.

Bird returned to the Seattle bench several minutes later and re-entered with 4:19 left. She added her third 3-poitner with 1:24 left to give Seattle a 15-point lead.

Seattle’s championship celebration was muted, limited to a max of 2,000 fans at its temporary home 30 miles north of the Storm’s permanent home as construction continues on Climate Pledge Arena in downtown Seattle.

As reinforcement to how much Seattle’s roster has changed from last year’s championship team, only five players on Saturday’s active roster for Seattle — Bird, Stewart, Lloyd, Jordin Canada and Ezi Magbegor — received their championship rings during the pregame ceremony.

Bird moved past Lisa Leslie and into seventh place on the WNBA career scoring list. … It was just the fourth time in league history the two finalists from the previous season opened the following season against each other. All four times the championship winner has won the season-opening rematch.

Seattle will host Las Vegas again Tuesday night. The teams will meet only once more in late June in Las Vegas.