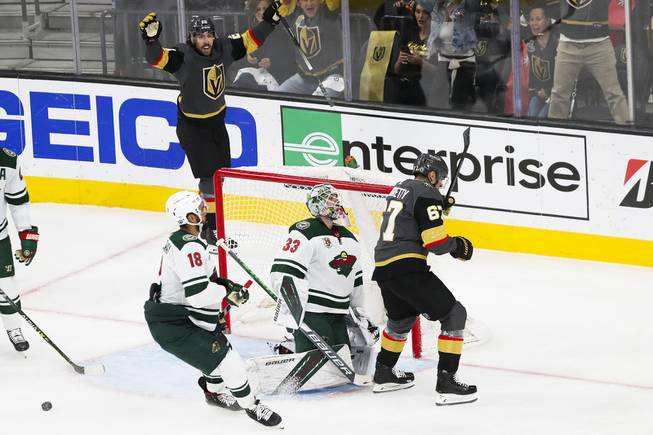 Analysis: If anyone can beat the Avalanche, it’s the Golden Knights

The Golden Knights looked like lightweight bowling pins for a large part of Friday night’s first period, tipping over or falling down even after only taking the slightest amount of contact.

The uncharacteristic clumsiness for the typically skate-you-silly Golden Knights didn’t ultimately mean anything in a 6-2 victory over the Minnesota Wild to escape the first round of the Stanley Cup Playoffs with a seven-game series win.

It sure just seemed like a byproduct of the nerves of the moment. The pressure was palpable everywhere at T-Mobile Arena on Friday, from the ice to the stands.

The Game 7 rally towels picturing Alex Pietrangelo — he’s No. 7, get it? — provided to the 12,156 fans in attendance waved from the beginning but they sure rotated with more conviction after Mattias Janmark started his hat-trick night with an early goal. And then with every successive goal from the home team after that.

It may not have been good for the mental health of most in the building, but the first-round showdown between the Golden Knights and the Wild ended the way that should have been considered most likely from the beginning. With how well Minnesota played all year, especially against Vegas, the series felt destined to go the distance.

The good news? So too could the next one.

Yes, the Golden Knights’ path to the NHL’s final four goes through the prohibitive Stanley Cup frontrunner, the President’s Trophy-winning Colorado Avalanche, with the teams’ second-round series starting at 5 p.m. Sunday in Denver. Colorado is a decent-sized favorite — early betting odds imply the Golden Knights have about a 35% chance to win the series — but Vegas is entering in a good spot.

Everyone can take a deep breath now; the fourth season in franchise history isn’t going to be remembered as an unmitigated disaster. That might sound harsh, but that’s exactly how things would have felt with a first-round exit after tying for the most standings points in the regular season.

Losing to Minnesota after holding a 3-1 series lead would have been a major franchise-altering moment, one that would have likely led to significant offseason changes if not close to an outright overhaul. Losing to Colorado in any fashion would be disappointing for a team that’s built to contend for a championship, no doubt, but a defeat would be more understandable, and the timing would make Vegas a victim of circumstance.

In a normal season, the Golden Knights and Avalanche wouldn’t even be playing each other until the Western Conference Finals. It’s a shame the long-awaited first playoff meeting between the two teams has to come prematurely because of the pandemic-shifted setup to the season, but maybe it will ultimately be to the Golden Knights’ benefit.

Citing a relatively minimized level of pressure is a flimsy explanation for why to expect Vegas to compete with Colorado and entirely narrative-based, but there are several more compelling, scientific reasons too. In a nod to Janmark’s big night in Game 7 against Minnesota, here are three of them.

• In a change from the first-round series, the Golden Knights will be the team closer to full strength. Vegas’ leading regular-season goal-scorer Max Pacioretty returned to the ice for the first time in nearly a month on Friday, and there’s no understating his impact. Not only did he put the Golden Knights ahead permanently with a goal from the slot off of a feed from Chandler Stephenson to make the score 3-2 but the team’s possession numbers were spectacular with Pacioretty on the ice. His presence lets Vegas restore its top two lines — something Colorado won’t be able to do, at least for the majority of the series. Avalanche second-line center Nazeem Kadri still has six games left on an eight-game suspension — pending appeal — from a dirty hit in the team’s first-round sweep of the Blues. He’s not the Avalanche’s best player, but he’s an important player. It will take some adjustment playing without him against a more evenly-matched opponent.

• Yes, Vegas has done enough to prove it deserves to be considered pretty evenly matched with Colorado. The two teams’ regular-season set of eight games were dead-even when looked at collectively. The total score was Vegas 18, Colorado 17 with each side nabbing four victories apiece. Sure, the Avalanche were banged up during some of the early-season meetings but that was made up for by the last encounter when the Golden Knights were forced to play with 15 skaters because of injuries and a salary-cap crunch. Despite the handicap, Vegas largely outplayed Colorado that night. The Golden Knights lost 2-1 but made it clear the Avalanche wouldn’t bury them like they buried virtually every other opponent they played this season.

• The Golden Knights won’t be buried because their offense is special. It was easy to forget with the struggles throughout the series with Minnesota, but Vegas was one of only four teams (along with Colorado and since-eliminated Pittsburgh and Washington) in the NHL to score at least 190 goals this season. With the clip the Golden Knights are capable of lighting up the scoreboard at, they can’t be counted out against anyone. Not even the best team in the NHL.

Just ask Minnesota. The Golden Knights went from the pins to the bowling ball in short order on Friday, striking down the Wild’s hopes with persistent and rapid pressure.

Vegas channeled the nervous energy of T-Mobile Arena and turned into an all-out attack of shots the way few teams can. The series with Minnesota wasn’t for faint-of-hearted fans of the favored team.

Avalanche fans should be warned. The next series won’t be either.