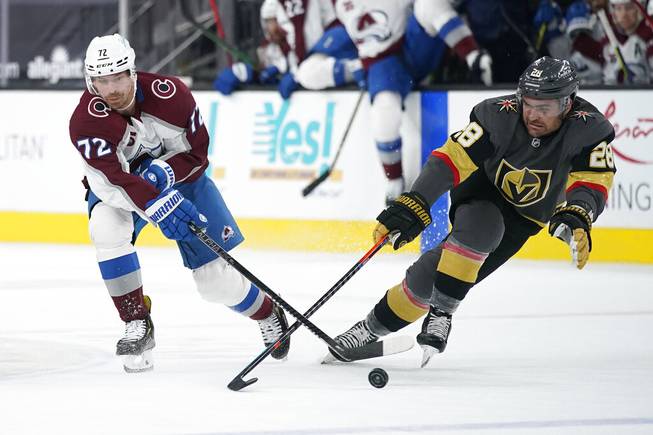 You can’t get plus money very often when wagering on the Golden Knights, which was the betting favorite in nearly all of its games this season.

But in both Game 1 and in the second round playoff series against the Colorado Avalanche, the Golden Knights are listed as the underdogs. Colorado is a minus-190 favorite for the series.

It’s only the second time in Golden Knights history they aren’t favored in a series — along with the 2018 Western Conference Final against Winnipeg — but Vegas is embracing it.

Statistically, Colorado was not only the best team in the NHL this year, but one of the best in a decade. The Golden Knights are pretty good though, and aren’t shrinking from the challenge. They’ll get a chance to establish footing in the series when the puck drops for Game 1 at 5 p.m. at Ball Arena and televised on NBC.

“It’s different than the first round, being an underdog, and coming in I guess with a little chip on your shoulder and trying to prove to everyone else that says that we have no shot of beating Colorado and that Colorado is the team to beat,” forward Alex Tuch said. “In our locker room we think that we’re the team to beat.”

The expected-goals number is particularly impressive. They’re the only team to surpass 60% for a series since Natural Stat Trick began tracking such numbers in 2007-08. When the Golden Knights led the league in expected-goals percentage last year, they did so with a 56.1% mark.

“You look at the analytics, they’re overwhelming,” coach Pete DeBoer said. “They’re great in every area, they’re rested, they’re fresh, they’re healthy. We’re going to have to be dialed in in all our areas in order to compete.”

Indeed, the Avalanche haven’t played since last Sunday after polishing off a sweep of the Blues in the first round where it outscored St. Louis 20-7. Vegas meanwhile played a physical seven-game series against the Wild, and has not had more than two days off in two weeks.

But the Golden Knights are getting healthier. They are not expected to have defenseman Brayden McNabb (COVID list) or forward Tomas Nosek (undisclosed injury), but Vegas played its trump card in Game 7 against Minnesota in the form of Max Pacioretty. He hadn’t played in nearly a month, then returned to score the series-winning goal.

A trickle-down effect of Pacioretty returning is slotting everyone else into their preferred spots in the lineup. Tuch performed well on the top line in Pacioretty’s absence, but his return meant Tuch slid back down to the third line, where DeBoer believes he forms mismatches with Nicolas Roy and Mattias Janmark.

Case in point: Janmark had a hat trick and the trio combined for six points in the Game 7 victory.

“We’ve had chemistry since the start it’s the first time in a lot of games that we’ve been able to play together,” Tuch said. “It provides a boost in our goal-scoring confidence for sure and I think it gives us a little bit of a deeper look, I guess you could say.”

The Golden Knights are expecting a similar lineup to Game 7 on Friday, with the only change coming in net. Marc-Andre Fleury started all seven games of the Wild series, but it was Robin Lehner who left the ice first for morning skate, a usual indicator of that night’s starter. Lehner has not appeared this postseason, but started 16 of the team’s 20 games last year.

Winner of the Vegas, Colorado playoff series will be the Stanley Cup favorites