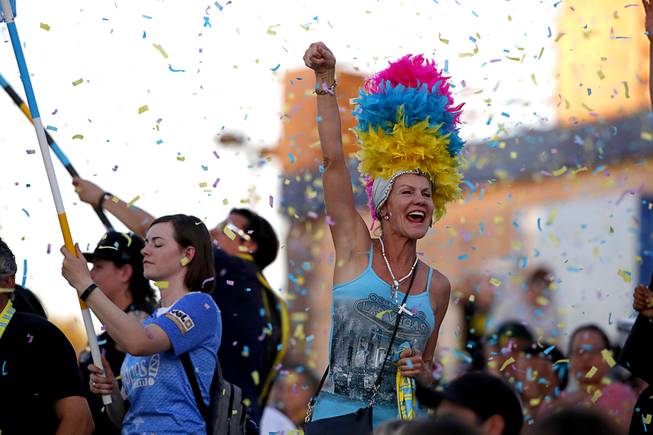 A Las Vegas Lights fan cheers during the Lights FC home opener against the Tacoma Defiance at Cashman Field Saturday June 5, 2021. The Lights shut out the Defiance 2-0.

Las Vegas Lights fan Jose Antonio Arana has always had a passion soccer, or as he calls it, the “beautiful sport.”

The 43-year-old grew up supporting Club Deportivo Águila in his native El Salvador, and still follows them religiously. But he’s also a diehard Lights fans.

Since the inception of the Lights franchise four years ago, Arana has formed part of the “Luz y Fuerza” support group. Before Saturday’s home opener against Tacoma Defiance, the “barra” tailgated outside Cashman Field.

Armed with drums, large flags, red and yellow flares, and powerful lungs, the group is one of two that encourage the Lights at Cashman Field. Arana bangs on a bass drum.

As the sun set, roasting at 108 degrees, a Mexican “norteño” music trio plucked away on acoustic guitars and electric bass while the Luz y Fuerza members rejoiced, grilling meats, dancing in a circle, and inviting passersby to join them.

“It doesn’t matter if the team wins or loses,” said Arana, who’s been in the U.S. for 20 years, in Spanish. “You have to support your home team.”

Arana, who owns a gardening business, said he hopes Las Vegas can get a Major League Soccer franchise one day. For now, he’s more than happy to support the Lights.

“I know we all miss our homelands, miss our clubs with all our heart, but in Las Vegas, we have to support the Las Vegas team,” he said.

Moments after the ref blew the opening whistle, the Luz y Fuerza members made their way to their seats behind one of the goals, bass drums booming and snares snapping.

They were joined by thousands on the stands, people from all shades, ages, and heights. Some posed for photos with Dollie, the team’s pet llama. Cash the Soccer Rocker, the other mascot entered the field in a motorcycle, blue smoke billowing from flares attached to it.

The team has pioneered creative seating: children splashed in kiddie pools on the sideline, and other fans watched from their Toyotas parked on the opposite sideline.

Early in the game, the fans cheered when a Lights player tried to chip the Tacoma goalkeeper from a midfield shot.

Not long after, in the 18th minute, the Lights’ Cal Jennings found the net by crossing the keeper. Cannons shot out blue and yellow confetti, the flags swung side to side.

Bryce Duke sealed the game for the Lights with a goal the 74th minute for a 2-0 win, the first for Las Vegas (1-4) on the young season.