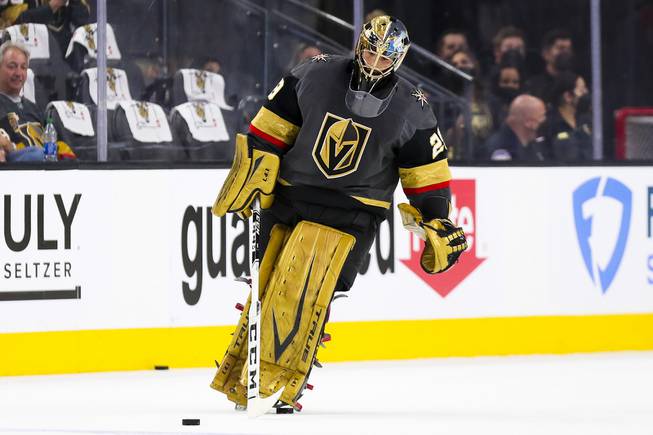 Marc-Andre Fleury has been a fan favorite in Vegas since the moment he walked through the curtain at the expansion draft nearly four years ago.

He added to his legend Friday in Game 3 of the second round playoff series against Colorado, making a point-blank save on Mikko Rantanen with 46 seconds left to preserve the comeback victory in a must-win spot.

Colorado took a time out, and the packed house of fans at T-Mobile Arena serenaded their favorite son with the loudest chants of the season.

Game 4 of the series is at 5:30 p.m. today and T-Mobile will again be loud from start to finish with a sellout crowd.

“We’ve been lucky to have some fans since the beginning of the playoffs here. It was nice, it was good, but tonight. Tonight was something else,” Fleury said. “To make a save and people cheering your name like that gives you goosebumps. I still get them now. It’s a lot of fun, it gives you a great feeling and it’s the reason why playing this game is so much.”

The crowd is loudest during the

pregame player introductions when he’s announced as the starter. Public address Bruce Cusick has his introduction down to an art. As flowers project on the ice and spin in circles, Cusick belts: “He’s No. 29. He’s Marc. Andre. Fleury!”

“He’s a beloved member of the team and the community, there’s no doubt,” coach Pete DeBoer said. “He’s earned every accolade he gets from the people here.”

Mark Stone is the captain, Max Pacioretty is the leading scorer, and the “Misfit Line” of Jonathan Marchessault, William Karlsson and Reilly Smith will always have a special place in the hearts of Golden Knights fans. Robin Lehner was the starter for much of last year’s postseason run, and as DeBoer pointed out, the home fans support anyone wearing the golden helmet on their chest.

He’s was that marquee name who arrived in the maiden season four years ago, leading the franchise to the Stanley Cup Final and helping the franchise quickly become the city’s unquestioned favorite team.

And this year may have been the best year not only of his Golden Knights tenure, but of his 17-year career.

He was Vezina Trophy finalist as the league’s top goaltender for the first time in his career and teamed with Robin Lehner to allow the fewest goals in the league this season — an accomplishment rewarded with his first Jennings Trophy and Lehner’s second. Fleury’s .928 save percentage and 1.98 goals-against average marked the bests of his career.

He hasn’t slowed down in the postseason, starting in net for all five of the Golden Knights’ wins and wearing every goal he allows like a scarlet letter. He was visibly upset after Game 2 when Rantanen’s overtime shot clipped him in the shoulder but still landed in the net.

He allowed himself a smile following Game 3 though. Even after Rantanen scored to give Colorado the lead earlier in the third period, Fleury had the last laugh with the game-saving stop in the final minute.

“Obviously it was frustrating losing that Game 2 in overtime there, so I had a chance to redeem myself a bit there,” Fleury said. “That was close. He looked up like he was coming higher than sneaked it five-hole. I was lucky enough to get down quickly enough to land on it. It was a good feeling.”

The Golden Knights will need Fleury to continue his strong play if they’re going to climb back into the series with the Avalanche. Vegas has outplayed Colorado for the last two games, but the Avalanche are too good to get outworked the way they have for the last five or so periods. The push is coming.

And when it does, Vegas is going to need its rock star goalie. He was spectacular in the regular season, terrific in the first round of the playoff, and if the Golden Knights are going to beat the Avalanche, he’s also going to need to be great in this round.