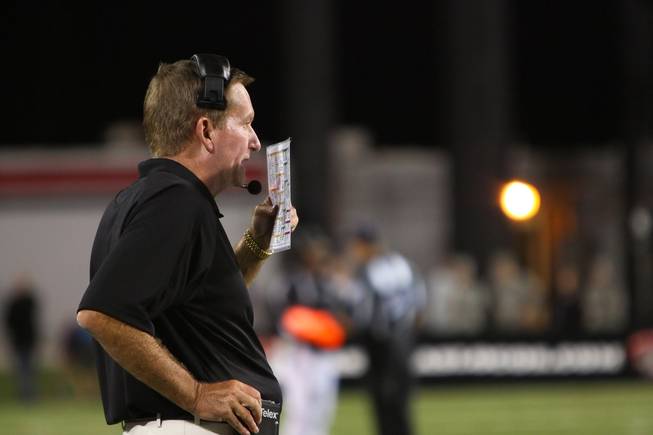 Locos head coach Jim Fassel calls scores during the fourth quarter of the game against the Nighthawks Saturday at Sam Boyd Stadium. The Locos won 22-10.

Fassel’s son, John, confirmed the death to the Los Angeles Times on Monday.

According to the Los Angeles Times, Fassel was taken to a hospital in Las Vegas with chest pains and died of a heart attack.

Fassel called Southern Nevada home after arriving in 2009 to coach the Las Vegas Locomotives of the United Football League. He led the Locos to the 2009 and 2010 league championship and posted a 16-6 record over four seasons.

Fassel played college football before a brief career in the NFL and Canadian football. He was also part of the coaching staffs at Denver, Oakland, Arizona and Baltimore, as well as head coach at the University of Utah.

Golden Knights have Avalanche rattled like never before, but can it continue?