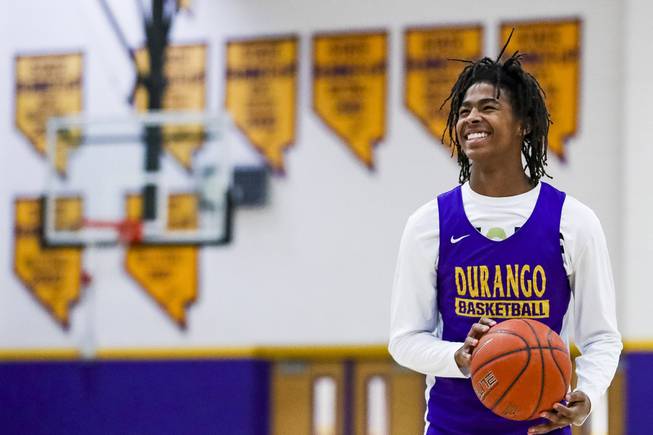 Keshon Gilbert was supposed to be a supporting player in UNLV’s 2021 recruiting class, but after blue-chippers Zaon Collins and Arthur Kaluma exited due to varying reasons it left Gilbert as the last man standing for new coach Kevin Kruger.

What is UNLV getting in its lone prep recruit this offseason? A Las Vegas native, Gilbert shipped out to St. Louis to play his senior season of high school in 2020-21 and by all accounts he had an impressive campaign, punctuated by a line of 10 points, six rebounds, four assists and three steals in the Missouri state championship game, which Gilbert’s Vashon squad won.

The first thing that stands out when watching Gilbert is the tone he sets on the defensive end. He plays with attitude and could turn into a legitimate asset as a defender.

He checks in at 6-foot-4 and he uses that length to his advantage, taking an active approach to defense that sees him get involved in just about every sequence. There were times last year when he appeared to flat-out smother his opponents, and he’s got a great nose for the ball. If the ball is out there, Gilbert believes it belongs to him:

Playing defense is about more than quick feet and strong hands, though. It’s a frame of mind, and Gilbert possesses that. He is willing to do whatever it takes and throw his body around if it will help his team.

In one of Vashon’s state playoff games last year, Gilbert took four charges and hit the floor a bunch of times in order to secure loose balls. He was a one-man tornado of grit:

Again, all the plays in that clip came from the same game.

Coaches love that type of bulldog mentality, and defense like that is the fastest way for a freshman to endear himself to the man who will determine his playing time. Now, there were some other games I saw where Gilbert didn’t quite play with as much intensity, and he’ll have to work on maintaining a consistent energy level from game to game, but if he hustles and defends there’s a good chance he’ll get some minutes as a freshman.

Offensively, Gilbert has talent, though it may not be as immediately evident as his defense.

When he’s in attack mode he can slice through set defenses and get all the way to the basket, but his dribble is a little high and loose, and he’s not a high flyer, so we’ll have to see how that part of his game plays at the Division I level:

As a shooter, Gilbert is confident. He enjoys end-of-clock situations and embraces the responsibility that comes with taking the final shot. And he appears equally comfortable shooting off the catch and off the dribble.

He made a bunch of tough shots in the games I watched:

As you can see, there were some rough misses in there as well. Gilbert’s shooting motion has a bit of a fling to it, as opposed to a stroke, so I’d categorize him more as a shot-maker than a pure shooter.

One of the questions that seemed to come up a lot during his recruitment was whether Gilbert is a point guard or some type of combo guard. At 6-foot-4 he profiles as a combo, but he did show some point skills at Vashon:

He can also lead a fast break like a point guard. He is quick to throw the ball ahead to streaking teammates if that’s the right play, and he is also capable of driving, cradling the ball and finishing with creativity in the open court:

There were some instances where Gilbert got caught in-between and ended up forcing awkward shots in transition, but for the most part he’s making the right decisions on the fly.

Is Gilbert a 5-star talent who’s going to wow in an AAU showcase setting? No, he’s not. But the things he can bring to the table — hard-nosed defense, tough shot-making, drawing charges, etc. — are the things that win basketball games.

Gilbert was rated a 3-star prospect, and that’s probably fair. It may take him a while to adjust to the college game, and he may never be a flashy, star-level player. But if he develops into a defensive-minded floor general who sets the tone for his teammates, he’ll help UNLV win.

Cowboy Camaraderie: Rodeo returns to Las Vegas with two organizations teaming up for a three-day weekend