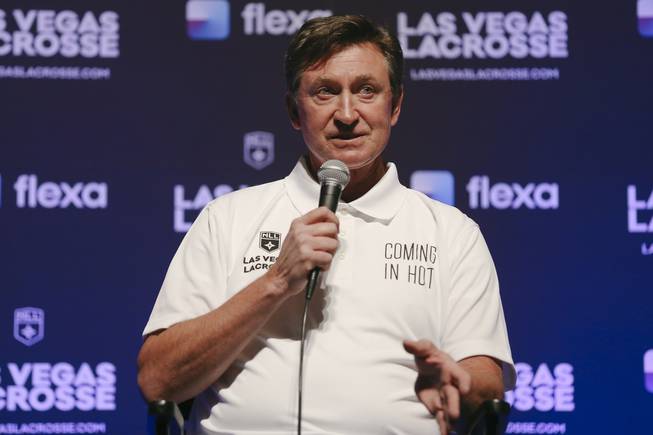 Nick Sakiewicz says bringing a National Lacrosse League team to Las Vegas has intrigued him since he became commissioner in 2016. When he attended a Vegas Golden Knights game during their inaugural season a year later, that interest turned to near certainty.

Sakiewicz says he and his team were blown away not only by the atmosphere they experienced inside T-Mobile Arena, but also after speaking to Golden Knights executives and learning that the fan passion they witnessed was coming almost entirely from locals.

“We’ve learned since the Golden Knights came that there’s a real community here, a sense of community around sports that lives here, works here and plays here,” Sakiewicz said during a recent press conference. “We got really excited about the deep community roots here.”

As the first major-league professional team to come to Las Vegas, the Golden Knights have gotten a lot of credit for the Valley’s recent sports boom. Now they’re indirectly responsible for the birth of another franchise. The NLL’s 15th franchise will begin playing locally in the fall of 2022 at Mandalay Bay’s Michelob Ultra Arena.

Box lacrosse is played on a court that shares the same dimensions as a hockey rink, albeit one with a hard surface, rather than ice. There are also more shots (box lacrosse averages 80 to 100 per game) and therefore more scoring (an average of 20-30 goals per game).

As a way to demonstrate its commitment to a local fanbase, the Las Vegas NLL franchise is calling on the public to help name the team. Fans can submit suggestions at lasvegaslacrosse.com for a chance to win season tickets and merchandise prize packs.

“I’m very lucky and fortunate that I grew up playing box lacrosse,” Gretzky said. “A lot of people down here don’t realize it, but the national sport of Canada is box lacrosse, not ice hockey.”

Gretzky conceded he was initially uncertain how the NHL might work in Las Vegas, but he’s thrilled it has taken off. Like Sakiewicz, he has marveled at the local passion for the Golden Knights, and said he’s been “pleasantly surprised” about the Vegas sports market as a whole.

Gretzky was bullish enough on Las Vegas to not only invest in the expansion lacrosse team himself but also pull in Johnson, the longtime boyfriend of his daughter and father of his grandchildren, for the project.

“I always said this when I went to the LA Kings: The LA Kings are never going to be the LA Lakers, but that’s OK because there’s room for a team there,” Gretzky said. “The LA Kings are a great organization—they have a great following, hockey has gotten bigger there, it’s gotten stronger every year.

“The Golden Knights are a great success, but we’re not trying to be the Golden Knights,” Gretzky continued. “This is a team and a league that’s going to find its own market and its own area. There’s room for two or three different kinds of franchises in one city, and this is a great city.”

Sakiewicz introduced Gretzky to Tsai, a billionaire who grew up playing lacrosse and walked on to Yale University’s team in college. Growing the sport has become a passion for Tsai, who already owns one NLL team—the San Diego Seals.

Tsai said he was determined to add a Las Vegas franchise to his growing sports empire in part because he believes lacrosse has a bigger head start here than many realize. Tsai has brought his sons to play in youth tournaments at Heritage Park in Henderson, and though he estimates the local lacrosse community is currently only “one-fifth” the size of the one in San Diego, there’s major growth potential.

With the way local fans have grown to love hockey, box lacrosse could be a logical next step.

“We want to make sure we’re deep-rooted and have grassroots support to support the team,” Tsai said. “We want to have a team that’s by and for the local community here.”

For MGM Resorts International, the deal to have the team play at Michelob Ultra Arena felt natural because, combined with the WNBA’s Las Vegas Aces, the venue will now have a sports tenant year-round. The NLL season typically runs from November through April, a perfect match with the WNBA’s May-to-September schedule.

Those two leagues also appear to be experiencing similar upward trajectories, according to Tsai, who owns the WNBA’ s New York Liberty. CNBC reported that Tsai paid $10-$14 million for the Liberty in 2019. The NLL expansion fee, according to Sportico, is expected to be slightly more than $10 million.

Given Tsai’s basketball ties, it’s fair to wonder if he could also one day help bring an NBA team to town. Las Vegas has been heavily rumored to attract either an expansion or relocating franchise since T-Mobile Arena opened.

“I don’t see it as an immediate possibility, but that’s something [NBA Commissioner] Adam Silver would answer better,” Tsai said.

Either way, the NLL, the next league bringing a team to Las Vegas, likely won’t be the last.