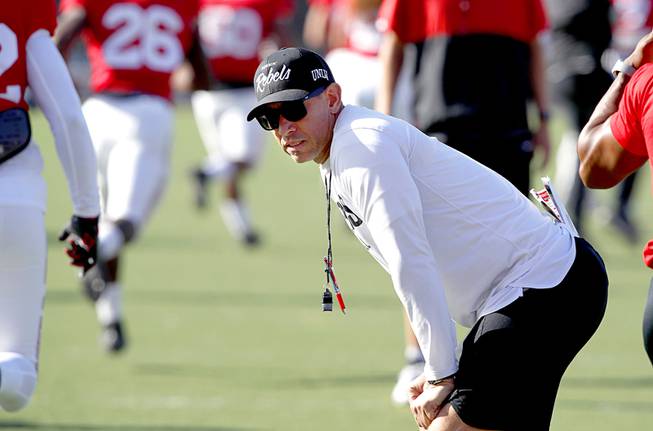 If a coach can’t be optimistic on media day, when can he?

UNLV may be coming off an 0-6 campaign, and the team was voted last in the 2021 preseason poll just minutes before Marcus Arroyo began his press conference at Wednesday’s Mountain West media day, but none of that stopped the second-year head coach from focusing on the bright side.

Arroyo touched on many topics during his hourlong meeting with the media, and sounded an upbeat note on most of them:

The biggest question throughout the offseason, likely right up until kickoff in Week 1, is the team’s quarterback situation. With three players battling for the top spot, it’s a process that won’t be decided until late in training camp.

Assessing the group as a whole, Arroyo said his biggest takeaway is just how little college football they have played, collectively.

“Inexperienced,” Arroyo said. “You’ve got Doug, technically a true freshman still. Justin’s finally healthy for the first time in his career since high school in Louisiana … Cam Friel is a true freshman coming in early.”

Arroyo, a former quarterback himself, did commend each of the QBs’ work ethic as the fight for the top job continues.

“Having coached it, having played it, I’ve been excited about how much work they’ve put in. They’ve done a really nice job of owning the fact that they’ve got to go out and do some dark-hour stuff. That’s what the quarterback position demands.”

The most positive revelation is that Arroyo feels more comfortable about opening up the playbook with this quarterback group. Last year’s offense had to be adjusted to stress concepts that the quarterbacks were capable of executing; this year, Arroyo believes his QBs can handle the big-boy stuff.

“I think we’re going to be closer to where we want to be, fitting the offense that we do, instead of just tailoring it around whoever we have,” he said. “We did a lot of things last year you had never seen in our offense because I do believe in trying to do something that fits who you’ve got. Now we get back to kind of being our philosophical self on offense.”

After having the 2020 season cut in half and turned upside-down by the coronavirus pandemic, UNLV appears to be taking vaccinations seriously.

Arroyo said that a majority of the team has received COVID-19 vaccinations and that he expects the number to climb even higher as the season approaches.

“We’ve done a really good job,” Arroyo said. “We’re upward around that threshold around 80, 85 percent, hopefully getting close to 90 when we get into [training camp].”

Arroyo said that estimated figure includes players, coaches and everyone “in the building.”

Not everyone jumped at the opportunity to get vaccinated, but Arroyo said the program provided educational outreach to help those hesitant players better understand the process.

“We’re not afraid to have those conversations,” Arroyo said. “I’m going to support and educate and then hear them out and try to help educate them the best I can. That’s what I believe is right. Do I believe vaccinations are good? Yes I do.”

There has been no announcement yet as to how the Mountain West will handle vaccination thresholds this season. Teams could be granted more lenient practice/travel restrictions if their vaccination rates are higher, but Arroyo said he’ll leave that up to the league and university leadership.

“Our team and our culture will support whatever those leadership positions say in regards to what we can do to protect both our city and our teams,” he said. “You have to be human. That’s what it comes down to. Be human. It is about protecting people, but it’s about hearing each other out. There’s going to be a lot of different walks of life. It’s more worldly than 12 Saturdays.”

Arroyo voiced his support for college athletes gaining the ability to profit off their name, image and likeness.

“I’m excited about it,” Arroyo said. “I’m excited that our guys are going to have the opportunity to be supported.”

“As a staff we won’t be tied into any of this,” Arroyo said. “We’re not connected to any of it. That’s why you’ve got a third party that runs it for you. We won’t be talking about, ‘Hey this guy’s making this, and so this guy could make that.’ We can’t do that.”

Arroyo does believe Las Vegas will be an appealing destination in general for players who envision NIL riches.

“I think the recruiting piece and the ability for a market like ours, with the attraction and the corporate entities piece and the sports city in itself, makes for a good market.”

When asked about his expectations for the 2021 season, Arroyo dismissed the Mountain West preseason poll, which projected his team to finish last in its division, and focused on goals that are less results-oriented.

How Kraken expansion draft stacks up against Golden Knights’ template