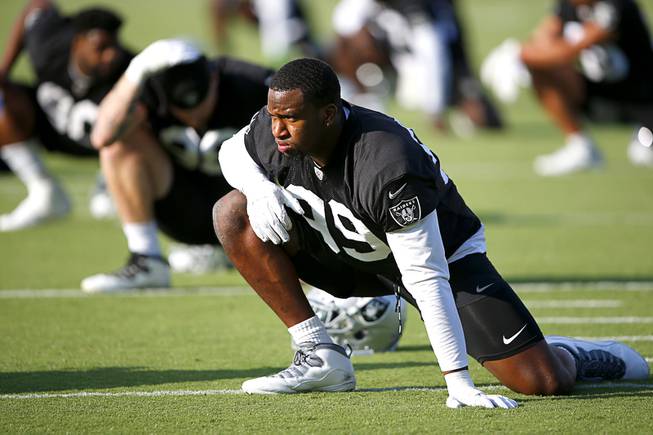 Position battles are a big part of every NFL team’s training camp, and the Las Vegas Raiders are no exception.

Despite an active offseason full of moves, the Raiders have relatively strong roster continuity and scheme familiarity going into Jon Gruden’s fourth season since returning for his second stint as coach of the team. That doesn’t mean everyone can confidently tab the exact starting 11 on both offense and defense ahead of the September 13 season-opener against the Baltimore Ravens.

The 30 scheduled practices that began July 28 at the Raiders’ Henderson headquarters leading up to that Monday Night Football appearance will go a long way in determining the specific makeup of the 53-man roster. Coaches like to preach that there’s competition at every position, and while that’s true to an extent, some spots stand out above others.

Here are three of the most visible starting spots up for grabs, and why they’re important to watch going into the season.

This might be the most intriguing battle of training camp, but also ultimately the least important. That’s because both of the edge rushers from the Raiders’ 2019 draft class are going to be crucial to the team’s success, even though it only appears one of them will technically be a starter.

Ferrell and Crosby started on opposite sides of the line for the majority of games in each of their first two seasons, but the arrival of prized free agent Yannick Ngakoue changes things. Ngakoue is certain to start on one side, likely the right, with the other defensive end role up for grabs.

Ferrell has been a better overall player through two seasons, but Crosby has been the more successful pass rusher, with 17 total sacks. The obvious choice, therefore, might be to start Ferrell and rotate in Crosby during passing downs.

But the reason it may not matter much in the end is because of Ferrell’s versatility. The former No. 4 overall pick put on weight last season to play more snaps on the interior of line, where he excelled and was arguably even more efficient than on the outside.

It’s unlikely Ferrell starts at defensive tackle in front of Johnathan Hankins or Quinton Jefferson, but the plan is for him to slide in frequently and make room for both he and Crosby to be on the field at the same time.

Ferrell and Crosby will forever be linked and compared, but despite playing the same position, they can actually be pretty complementary to each other.

Las Vegas Raiders cornerback Damon Arnette (20) walks off the field after injury against the Atlanta Falcons during the first half of an NFL football game, Sunday, Nov. 29, 2020, in Atlanta.

Benching a second-year player who started in his rookie season after being taken with a first-round draft pick is highly unusual and far from ideal, but it looks to be the way the Raiders are leaning at cornerback.

Arnette struggled in his first year out of Ohio State, though a nagging hand injury and a bout with coronavirus didn’t help matters. The Raiders’ company line after the season was that Arnette was still a big part of their future and someone who would make strides once healthy and with the benefit of a full offseason.

But in June’s offseason practices, Arnette was often off to the side and not fully engaged in drills. The veteran free agent signing Hayward, on the other hand, emerged as a leader as he helped teammates adjust to new defensive coordinator Gus Bradley’s system.

The 31-year-old Hayward appeared to be in great shape and the likely starter opposite Trayvon Mullen on the outside. Some may wonder why the Raiders don’t push Arnette or Hayward inside to play in the slot, but the team doesn’t think that’s the best match for their skillsets.

Coaches are committed to Nevin Lawson and Amik Robertson as slot cornerbacks.

It might be a mistake to write off Arnette, though, especially considering he has a history of standing out during training camp. He wasn’t promised a starting job last year and the team considered bringing him on slowly, but the raw talent he flashed in practices gave the Raiders confidence to fully commit to him earlier than expected.

Arnette will need to show some sure signs of progress to get the same benefit of the doubt this year.

Consider this the opposite of the defensive end competition: It may not be the flashiest undetermined starting role, but it’s almost certainly the most vital.

There’s a relatively new school of thought in football, guided by compelling statistical evidence, that center is the second-most important offensive position behind quarterback. The Raiders have to replace one of the best centers in the league after trading Rodney Hudson to the Arizona Cardinals this offseason.

Cutting loose Hudson was the type of bold move a team likely wouldn’t make unless it thought it had a suitable replacement. All signs point toward Las Vegas believing in James, who has shown potential in practice the past two years after signing with the team as an undrafted free agent out of UCLA.

But just in case James isn’t quite ready, the Raiders brought in an experienced veteran in Martin, a starter for the Houston Texans in each of the past four years. Martin has been a reliable pro throughout his career, likely making him the safer option, but James has the higher upside.

James has gained the trust of quarterback Derek Carr and left tackle Kolton Miller, two leaders of the offense at positions the starting center will need to be in sync with on every play. The starting job looks like James’ to lose in training camp, even if Martin has the more recognizable name.