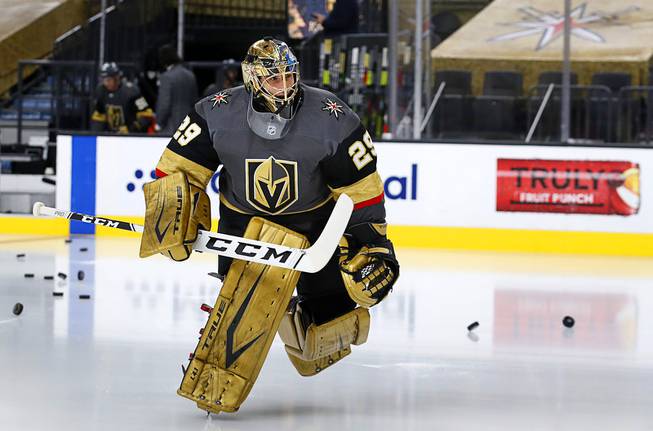 Marc-Andre Fleury won’t retire, will play for Blackhawks next season

Vegas Golden Knights goaltender Marc-Andre Fleury (29) skates onto the ice for warmups before Game 2 of a Stanley Cup playoff series against the Minnesota Wild at T-Mobile Arena Tuesday, May 18, 2021.

Marc-Andre Fleury will play next season after all.

Despite reports the 36-year-old goalie might retire instead of playing out the last year of his contract following his trade from the Golden Knights, Fleury will indeed suit up for them next season, according to multiple reports.

Fleury was reportedly “totally shocked” the Golden Knights moved him that he “doesn’t want to play there,” according to the Athletic.. Fleury’s agent, Allan Walsh, said Fleury would take some time to “evaluate his hockey future at this time” after the trade.

Fleury has one year remaining on the three-year extension he signed with the Golden Knights in 2018 with a cap hit of $7 million. Vegas moved him, essentially for nothing, on Tuesday in order to gain cap space, which they used to trade for Senators winger Evgenii Dadonov and sign backup goalie Laurent Brossoit.

The move was tough for Golden Knights fans, as Fleury had become a beloved figure in his four years in Las Vegas. He helped lead the Golden Knights to the Stanley Cup Final in 2018, then won the Vezina Trophy as the league’s top goalie last season.

The Golden Knights will play the Blackhawks three times next season, on Jan. 8 and March 26 in Las Vegas and on April 27 in Chicago.