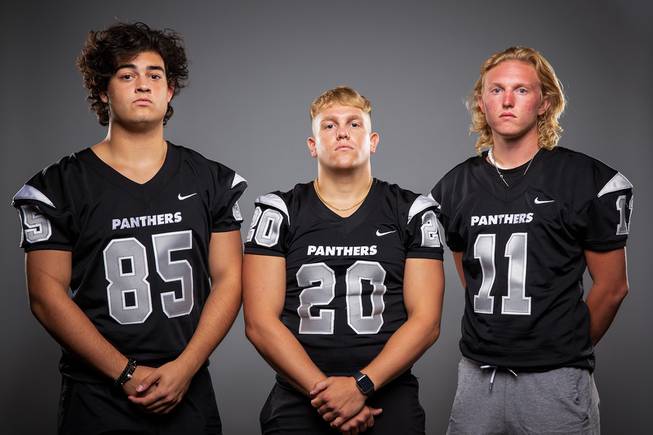 Members of the Palo Verde High School football team are pictured during the Las Vegas Sun’s high school football media day at the Red Rock Resort on August 3rd, 2021. They include, from left, Calvin Levy, Luca Mauriello and Brady Denardin.

Brady DeNardin passed for a pair of touchdowns, including a 20-yard scoring strike to Isaiah Wolf on the final play of the first half for a manageable 14-7 halftime deficit.

But Palo Verde fumbled the opening kickoff of the second half and Green Valley quickly scored for a 20-7 lead.

The Panthers cut into the lead on a DeNardin to Edward Rhambo touchdown pass, and recorded two blocks on a Green Valley field goal attempt and extra point.

Both schools now have 2-1 records, but Palo Verde has more momentum after rallying for the win.

“The kids exploded with exuberance after the game,” Palo Verde coach Joe Aznarez said. “It was a total team effort — all of the kids.”