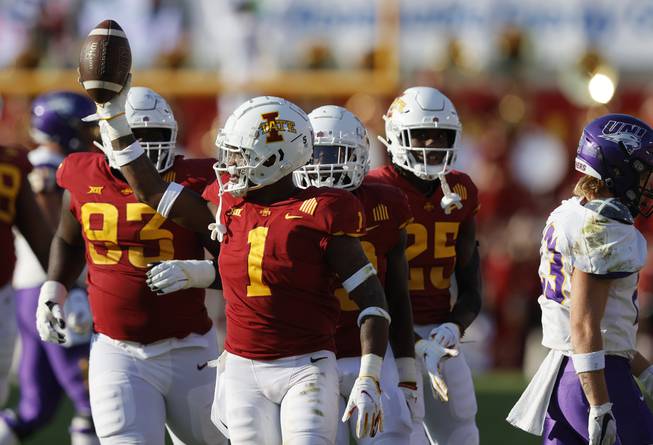 College football by the odds: Vegas preview and picks of every Week 2 game

Iowa State defensive back Isheem Young (1) celebrates an interception during the second half of an NCAA college football game against Northern Iowa, Saturday, Sept. 4, 2021, in Ames, Iowa. Iowa State won 16-10.

One of the biggest factors in the success of the NFL pick’em column over the years has been its relatively early run date on Thursdays, which allows for finding edges before the betting market adjusts closer to kickoff.

If you’re a seasoned bettor but one who’s not wagering at the limits, then it’s usually advantageous to get money down sooner. It’s long overdue that I employ the same strategy with the weekly college football betting column.

So, starting now, Wednesday will be the new run date of college football by the odds. My hope is that writing about the action a couple days earlier than normal will increase closing line value, and then theoretically, the bottom line.

Yes, this might be a case of overthinking, an “if it isn’t broke, don’t fix it,” violation considering results have been mostly positive in college football over the years here. But it’s time to evolve — the format has changed, now so too has the schedule.

Despite a slide in the final few games, Week 1 was a success with a 25-20-1 against the spread record picking every game including 6-4 on plays, 11-8-1 on leans and 8-8 on guesses. Let’s keep the momentum rolling in Week 2, doing it a timeline that should be the most beneficial.

Read below for picks on every Week 2 game, with write-ups for the biggest contests and betting positions. Lines are the best currently available in Las Vegas on the chosen side. Picks are labeled with three separate confidence categories — plays, leans and guesses.

Oregon +15 at Ohio State, over/under: 63.5. The ideal scenario would have been Oregon holding onto their early big lead against Fresno State while Ohio State continued to struggle against Minnesota to get a number closer to 10 on this game. Of course, the opposite happened to dissipate a chance to sell high on an overrated Ducks’ team. Ohio State is no finished product of its own, however, and laying more than two touchdowns is ill-advised. Guess: Oregon +15.

Iowa +4 at Iowa State, over/under: 45. It looks like time to sell high on Iowa. The Hawkeyes played at the top of their range in beating Indiana 34-6 in a conference game they surely spent all training camp preparing for, while Iowa State struggled with a Northern Iowa side that always gives it problems in a 16-10 win. The Cyclones opened as a 6.5-point favorite over Iowa in Game of the Year lines over the summer, and that still might be a fairer price. Play: Iowa State -4.

Texas -6.5 at Arkansas, over/under: 56. Take advantage of playing Texas at reasonable prices while they’re available. It won’t be long, as the market is already catching up following a lopsided 38-18 win over Louisiana. The Razorbacks aren’t nearly as dangerous as the Ragin’ Cajuns, leaving no reason why the Longhorns shouldn’t be more than a touchdown favorite for the second straight week. Play: Texas -6.5.

Washington +6.5 at Michigan, over/under: 48.5. It’s my annual Week 2 tradition to back the most prominent FBS program that lost to an FCS team in Week 1, but I’m afraid I can’t partake this year. Yes, the market has reacted starkly to Washington’s 13-6 loss to Montana with a 3-point move towards Michigan here, but it looks justified. Murmurs of offensive struggles in camp turned out to be true for the Huskies, which couldn’t even manage 4 yards per play against the Grizzlies. Michigan’s 9.1 yards per play against a talented Western Michigan side, meanwhile, was eye-opening. Guess: Michigan -6.5.

Utah -7 at BYU, over/under: 49. Too much of BYU’s power rating and market perception is based on last year’s success, but the Cougars are breaking in an almost entirely new team. They’re 118th in the nation in returning production, according to the SP+ ratings, while the Utes are nearly 100 spots ahead at No. 21. Utah is a play at anything less than 7, but still worth backing more conservatively at that price too. Lean: Utah -7.

Stanford +17 at USC, over/under: 51.5. This is a big game only from the perspective of recent history, as these teams battled in several pivotal Pac-12 games over the last decade. This year’s showdown is nothing of the sort. Stanford’s personnel is far removed from those title contending teams as a season-opening 24-7 loss to Kansas State made evident. USC should be at least a 21-point favorite at home. Play: USC -17.

Pittsburgh -3.5 at Tennessee, over/under: 56. These teams look incredibly evenly-matched, making it nonsensical that the home team is more than a 3-point underdog — especially when this home team has one of the biggest home-field edges in the nation with 102,000-seat Neyland Stadium. The Volunteers also have a coaching edge that’s not reflected in the line with Josh Heupel against the Panthers’ Pat Narduzzi. Play: Tennessee +3.5.

Air Force -5.5 at Navy, over/under: 40.5. Air Force obliterated Navy 40-6 a year ago and has only gotten stronger with an army of turnbacks who sat out last season now returning on the roster. Navy, meanwhile, has gotten weaker and looked nothing less than one of the worst teams in the nation in a 49-7 loss to Marshall to open the season. Play: Air Force -5.5.

Liberty -5 at Troy, over/under: 61. A highly-explosive offense pairs with a veteran-laden defense to give a promising program a shot at one of the best seasons in school history. That could be a description for either Liberty or Troy. There’s less separating these two teams than popular opinion implies. Play: Troy +5.

Prep Sports Now: Is it too early to project an undefeated football season?