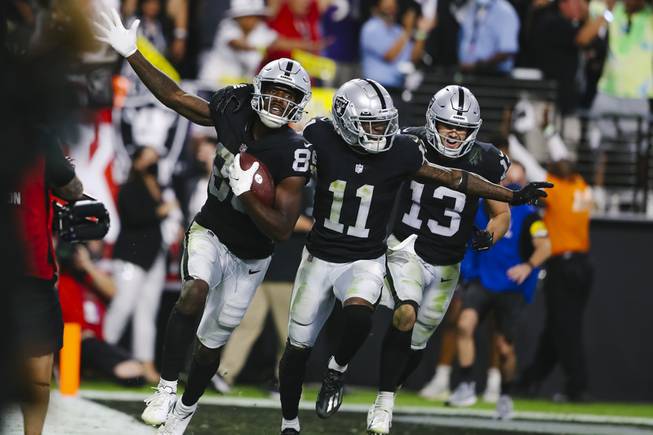 Having to win twice: Raiders thrill in overtime collapse, comeback

A Raiders’ staffer handed coach Jon Gruden a headset and started escorting him to a postgame television interview in the moments after Bryan Edwards appeared to catch a game-winning touchdown in overtime against the Ravens on Monday night.

Then someone else yelled the game wasn’t over, leaving Gruden confused and unsure of whom to trust. The latter voice was the correct one, as officials reviewed the score despite players from both sides converging on the field under the same assumption as Gruden that the game had concluded.

“We were all kind of celebrating, shaking the other teams’ hands and things like that,” running back Josh Jacobs said. “They had a lot of respect for us. In that moment, they were telling us, ‘Y’all got a good team offensively and defensively.’ They were like, ‘Man, ya’ll kind of deserved this game.’”

But replay disagreed; the touchdown was overturned and the ball placed inside the one-yard line. What happened next must have inspired hundreds of thousands, if not millions, of, “Only the Raiders,” or, “Raiders are going to Raider,” thoughts across the Monday Night Football television audience.

Rookie tackle Alex Leatherwood jumped offsides. Quarterback Derek Carr then threw into traffic and a freak deflection landed in the hands of Ravens cornerback Anthony Averett in the end zone. A sure win was now looking more like the unlikeliest loss.

But the Raiders didn’t “Raider” on this night. The defense rose to the challenge after the interception with backup edge rusher Carl Nassib forcing a Lamar Jackson fumble that backup defensive tackle Darius Philon recovered. Derek Carr found Zay Jones for a 31-yard touchdown a couple plays later.

Gruden’s wish earlier in the week that the first regular-season game with fans in the history of Allegiant Stadium would prove worth the price of admission was granted. This just wasn’t exactly what he had in mind.

“I feel like I died and woke up and died again and woke up,” Gruden said. “I was like a cat. I had multiple lives tonight.”

The win was the 114th of Gruden’s career in his 224th overall game, but he couldn’t remember a single one with a finish so wild. Las Vegas never led until the final play, only reaching overtime when kicker Daniel Carlson socked a line-drive 55 yards through the uprights with two seconds remaining in regulation.

The offense scored 17 points, on three straight drives, in the fourth quarter behind an NFL-leading 435 total passing yards from Carr, who started slow. The defense took its lumps, giving up 321 combined rushing and passing yards to Jackson, but forcing him to fumble in two critical situations.

In addition to Nassib’s overtime strip-sack, defensive tackle Quinton Jefferson chased him down for a fumble late in the third quarter that led to Jacobs’ second touchdown of the night and a tie 17-17 score.

“The thing that stood out was so many guys making big plays,” defensive end Maxx Crosby said. “I just love playing with this group.”

Crosby might have been the most valuable of them all, pressuring Jackson on virtually every dropback in an All-Pro-type debut for his third season. He wound up with six tackles, two sacks and five quarterback hits.

Sidekick Yannick Ngakoue was just as disruptive in his debut after signing with Las Vegas as a free agent. The former Raven brought consistent pressure and racked up a quarterback hit and a pass defensed before exiting in the fourth quarter with a hamstring injury.

Las Vegas refused to let an injury to one of their best players prove fatal, as Nassib filled in and immediately started to make his own impact on the game.

“We want to play until the last whistle blows,” Nassib said. “We fought hard, everybody. No one blinked throughout the entire time. I was running on the field (in overtime). I thought that was a touchdown. But we got back, got settled.”

Another mishap nearly struck after Nassib got the Raiders’ offense the ball back. After one play, Gruden made the surprising decision to call for the field goal team on second-down from the 26-yard line to attempt a game-winning kick.

Carlson wasn’t expecting it and couldn’t get to the field on time. Delay of game. Gruden reconsidered and sent the offense back out.

That’s when he and Carr both realized Baltimore was lining up for an all-out blitz, hoping to knock Las Vegas out of field-goal range or force another turnover.

“I saw it and I yelled at Zay,” Carr said. “I was like, ‘Hey!’ and he wouldn’t look at me because he didn’t want the (defensive back) to know it was coming. I yelled, ‘let’s go!’ and he just kind of nodded and looked at me, but he had a great release on the line.”

A rebuilt Raiders’ offensive line that had struggled throughout the night held long enough for Carr take his full dropback, plant his back foot and chuck the touchdown pass to the all-alone Jones.

“I’m glad coach trusted us and put it on our hands in the end because it always feels good to win that way, especially when you almost gave it away,” Carr said.

Jones made the decisive catch, but he was one of six Raiders’ receivers with at least 46 receiving yards. Tight end Darren Waller remained as Carr’s go-to target, hauling in 10 of 19 targets for 105 yards and a touchdown that tied the game at 24-24 late.

Second-year receivers Bryan Edwards and Henry Ruggs III made a few gaffes over the first three quarters but made a number of crucial catches late. Edwards was particularly vital, sitting behind only Waller on the stat sheet with four catches for 81 yards including the game-winning touchdown that wasn’t really a game-winning touchdown.

The Raiders have “never made things easy” on themselves recently, in Crosby’s words. But ultimately, the near-unprecedented nature of this victory will add to its charm.

It was a special night with 61,756 in attendance at Allegiant Stadium, including luminaries like owner Mark Davis and superfan Ice Cube, to create a raucous atmosphere. Davis, who stuck to his word about not coming to a game until the full capacity was allowed, sat with Hall of Famer Charles Woodson is a luxury box while Ice Cube performed at halftime alongside Too $hort.

Everyone is desperate for a winner, and if this is indeed the year that can break the Raiders’ 19-year streak without a playoff victory, the win over the Ravens will be remembered for starting the campaign in style — and with suspense.

“I hope this is a sign of things to come,” Carr said. “Who cares how we did it?”

Gruden added, “Like we say around here, just win baby.”