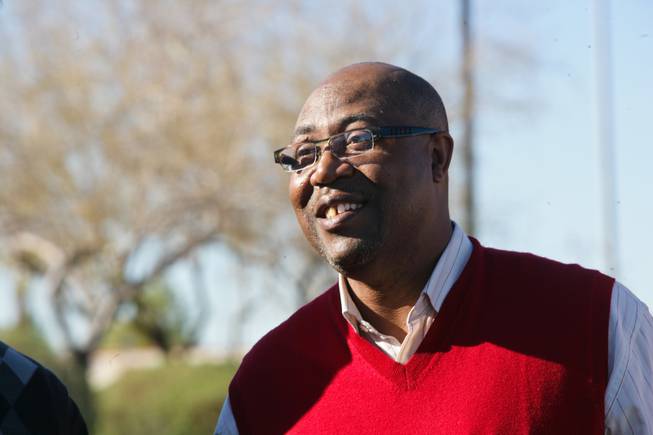 Robert Smith, the point guard of the 1977 UNLV team that advanced to the Final Four for the first time in school history.

Freddie Banks during his time as a standout with the UNLV Runnin’ Rebels. “Fearless” Freddie ranks second on the Rebels list for career three-pointers.

UNLV basketball great Freddie Banks was in shock when he received a phone call from Rebels coach Kevin Kruger with some long overdue news: The program is retiring Banks’ No. 13 jersey.

“My reaction was surprised. I didn’t know if I should tear up or if I should be thankful,” said Banks, a Valley High graduate who helped UNLV reach the 1987 Final Four and established many program shooting records in the process.

Banks will be honored Nov. 27 at halftime of a game with UCLA at the Thomas & Mack Center. Robert Smith, the point guard on UNLV’s 1977 Final Four team, will have his No. 10 jersey retired Feb. 19 when the Rebels host Colorado State, the university announced today.

When the call ended with Kruger, Banks immediately started thinking about his family. Mom Martha is 86, dad Tilmon 85. “It’s a real blessing that this is happening while my mom and dad are still here,” Banks said.

“I know he wanted this to happen for a long time,” Banks said of Tarkanian, the Naismith Memorial Basketball Hall of Fame coach who died in 2015.

When it was time to attend college, he didn’t move to campus. He stayed at home with his parents. They’ve lived in the same house on Lake Mead Boulevard and Engelstad Street for more than 50 years. It’s where Banks honed his shooting touch in the driveway.

About the time Banks reached middle school, the Smith-led Rebels reached the Final Four, and Banks fell in love with Tarkanian’s fast-break style of play.

“It was Robert, Ricky Sobers, Reggie Theus and Sam Smith. Those guys are what made me want to go there,” Banks said. “I watched how those guys ran up and down the court, and UNLV was my choice.”

“We are very much looking forward to honoring these two Runnin’ Rebel legends,” Kruger said in a statement. “Freddie and Robert both had incredible careers at UNLV and have been amazing ambassadors for our university and the men’s basketball program. They are both very deserving and those will be two special nights for them, their families and the fans.”

Although the numbers of Banks and Smith will hang in the area rafters, they still will be available for current players, UNLV said. Banks’ No. 13, for instance, is wore by current Rebel Bryce Hamilton.

UNLV basketball staying home for most of non-conference schedule